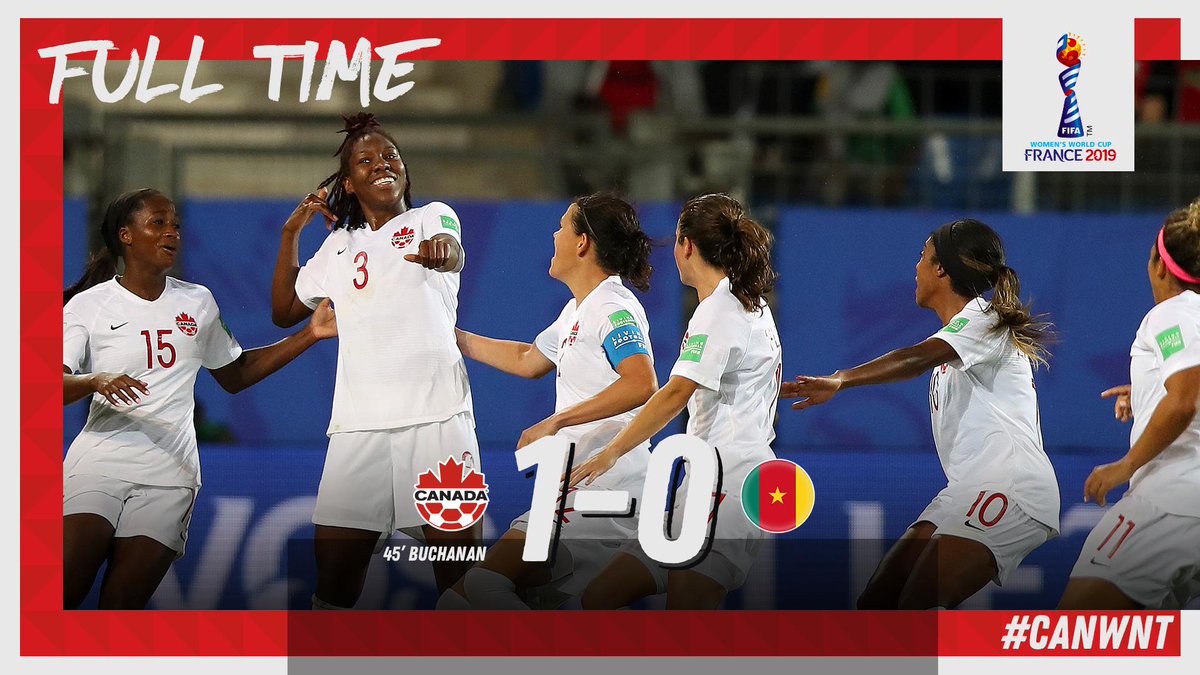 Canada Soccer’s Women’s National Team earned three important points in the opening match of the FIFA Women’s World Cup France 2019™ against Group E opponent Cameroon. Kadeisha Buchanan’s goal in first half added time off a Janine Beckie corner gave Canada the halftime lead in the 45’. Canada travel to Grenoble to take on New Zealand on 15 June before finishing the group phase against Netherlands in Reims on 20 June.

Buchanan found herself forward for the corner kick after a free kick and spell of attacking pressure and created space at the back post.  Beckie’s lofted corner was met by Buchanan to beat Cameroon goalkeeper Annette Ngo Ndom for the eventual winner.

Canada dominated possession for long spells in the first half. Ashley Lawrence and Allysha Chapman spent extended periods pushed forward with Jessie Fleming and Sophie Schmidt moving the ball well in front of a compact defensive Cameroon lineup. Buchanan and Shelina Zadorsky also found themselves able to push forward and spent extended periods with the ball at their feet in the early going.
Canada earned seven corner kicks in the first half keeping Cameroon on the back foot, however, the African side’s pace became evident as they launched several counter-attacks. Nichelle Prince’s cross in the 13’ found Fleming in the box for a headed chance. Just three minutes later Sophie Schmidt had another great headed opportunity on goal. Cameroon’s counter-attacking caused Canada a few issues in around the half-hour mark as Canada dropped back momentarily to defend. After a yellow card was shown to Cameroon’s Marylse Ngo Ndoumbouk. Canada began to take control again. Christine Sinclair’s header in the 40’ nearly found the net, and Nichelle Prince put a deflected shot off the post in the 44’ after Allysha Chapman pulled a ball across the box off a great run down the left side.

Cameroon came out in the second half determined to pressure but Chapman, Lawrence, Zadorsky, and Buchanan all had important tackles in the opening minutes of the second half. Lawrence also continued to find space wide, sending a cross onto the head of Sinclair in the 49’. Just a moment later, Fleming drew a free kick in a dangerous spot at the top of the Cameroon box. Sinclair stepped up and shot, but, the ball struck the wall and away out of danger. Lawrence once again played creator in the 60’, dropping a ball at Prince’s feet in a dangerous area before Prince put the ball over the bar. Second half sub Deanne Rose showed off her blistering pace chasing down a ball in the corner and placing it on Christine Sinclair’s head in the box but she put the ball just wide. A slew of corner kick opportunities with Beckie, Sinclair, and Schmidt were taken to try for a second goal but the final whistle blew with Canada earning the 1-0 victory.

“As we keep them in the game, it will be tighter, we wanted to score early to get that pressure off our backs. On the goal, it was a great cross from Janine and just to finish was easy. It’s crucial to get the little gimmicks out and we will keep the momentum going and we’ll be better.”  – Kadeisha Buchanan

Canada started Stephanie Labbé in goal, Ashley Lawrence at right back, Kadeisha Buchanan and Shelina Zadorsky at centre back, Allysha Chapman at left back, and Desiree Scott, Sophie Schmidt, Nichelle Prince, Janine Beckie, Jessie Fleming and Captain Christine Sinclair from the midfield up through to the attack. In the second half, coach Kenneth Heiner-Møller replaced Prince with Deanne Rose (75’).


CANADA AT THE FIFA WOMEN’S WORLD CUP FRANCE 2019™
Following Canada’s 10 June opener against Cameroon in Montpellier, Canada will go on to face New Zealand on 15 June in Grenoble before closing out group play against the Netherlands on 20 June in Reims. Beyond the group phase, two or three nations from Canada’s group will advance to the Round of 16 with those initial knock-out matches to be played from 23-25 June. The Quarter-finals will be played 27-29 June and the Semi-finals will be held 2-3 July,leading to the Final of the FIFA Women’s World Cup France 2019™ on 7 July.

“Heading into an away FIFA Women’s World Cup, we hope that the echo from our Canadian fans back home will carry us through our month in France,” said Kenneth Heiner-Møller, Canada Soccer’s Women’s National Team Head Coach and Women’s National EXCEL Director. “It is so special to play in a FIFA Women’s World Cup. You don’t get this moment back. That could be a pressure for some, but it can also provide excitement. We know we have the support from back home and that is very important for us.”


SUMMER OF SOCCER: TOGETHER WE RISE
Canada’s National Teams have embarked on an incredible month of competition during the FIFA Women’s World Cup France 2019™ and the 2019 Concacaf Gold Cup. Your National Teams are united as “Together We Rise” with the momentum for our game stronger than ever. We urge Canadians to rally behind your National Teams as our Canada Soccer Nation strives for best-ever performances.