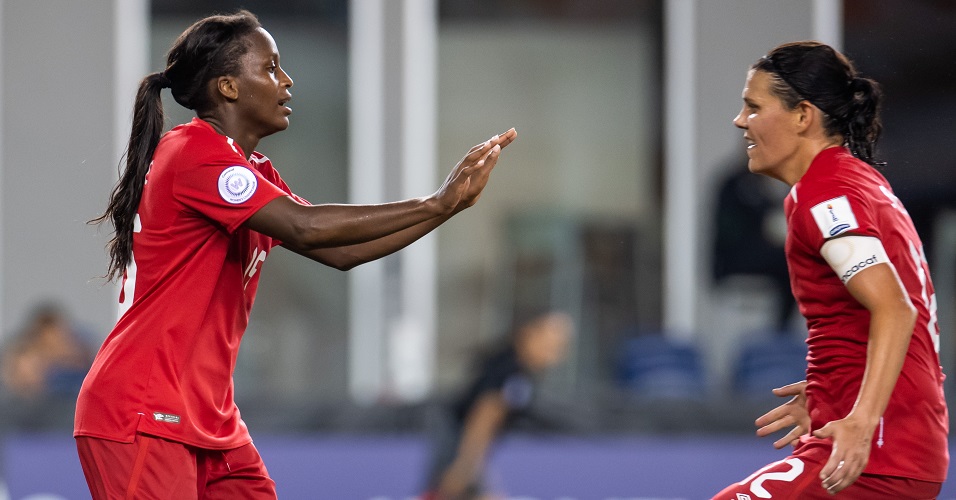 Canada opened the group stage at the 2018 Concacaf Women’s Championship with a 2:0 win over Jamaica at H-E-B Park in Edinburg, Texas. The victory gives […]

Canada opened the group stage at the 2018 Concacaf Women’s Championship with a 2:0 win over Jamaica at H-E-B Park in Edinburg, Texas. The victory gives Canada three points in Group B. Nichelle Prince scored two goals and Stephanie Labbe got the shutout. Jessie Fleming was the Player of the Match.
“We knew that Jamaica was a hard team to beat. They’re very organized and have very skilled players up front,” said Kenneth Heiner-Moller. “We kept a clean sheet, that was important for us. Overall, to start the tournament with a clean sheet and three points, that’s not a bad way to start.”
Canada dominated possession for the first 30 minutes, but were unable to get shots through on goal. In the 31’, after Jamaica was unable to deal with a Canada corner, an Allysha Chapman ball into the box fell to Nichelle Prince who pounced to bury Canada’s first. Prince also got Canada’s second, scoring on a through ball from second half substitution Adriana Leon.
“It’s really great to finally get to start the tournament, and this was not an easy game, Jamaica. They put a good team out there and they worked really hard, and defended as well,” said goalscorer Nichelle Prince. “It was really great to end the game with two goals and the win. We’re happy about what we put out there, and we’re happy we got the win.”
Canada’s second group stage match against Cuba takes place Monday, 8 October at 19:30 local (20:30 ET/17:30 PT) followed by Canada v Costa Rica on Thursday, 11 October at 21:00 local (22:00 ET/19:00 PT).  Following the group stage, all matches will be played at Toyota Stadium in Frisco, Texas.  Fans can watch all of Canada’s matches online for free at cwc.concacafgo.com.
“Credit to Jamaica, they were organized, they hit us on the counter and looked dangerous at times,” said defender Shelina Zadorsky “We’ve got a few things to clean up, but, overall proud of the performance.”
In Group B action earlier in the day, Costa Rica defeated Cuba 8:0.  On the other side of the table, Group A opened the tournament in Cary, NC with the USA overwhelming Mexico 6:0 and Panama defeated Trinidad and Tobago 3:0.

Looking ahead to Canada’s next match the goal will certainly be to get another three points against the 85th ranked Cubans, but Canada is expecting to be challenged by the speed and deliver of its opponent’s front line.

“We’re not taking any team for granted, and it’s great to see other nations in the tournament and play against different opponents,” Zadorsky said. “We’re looking forward to the next challenge.”