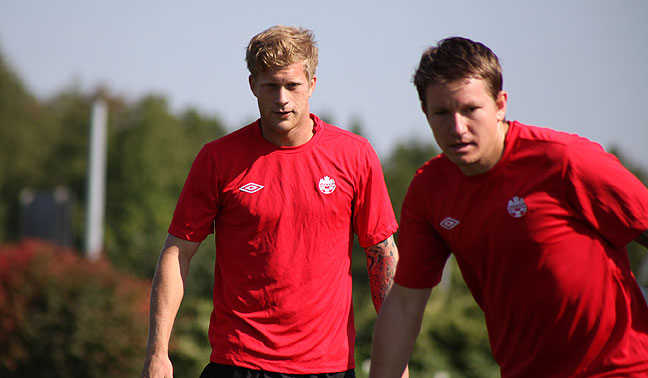 Players arrive from clubs in North America and Europe.

Canada’s national team has opened camp in Alliston, ON in advance of this Friday’s FIFA World Cup Qualifiers match on 7 September 2012. The first group of players arrived safely from their clubs over the weekend, thus available to take part in the first Canadian training session on Monday 3 September at the Nottawasaga Inn just north of Toronto. More players will arrive Monday night in advance of Canada’s next training session on Tuesday 4 September.

Coach Stephen Hart and his staff put the players through a 90-minute session, with more than 50 local soccer kids and parents on hand to watch the session (on the last summer day before the start of a new school season). After the session, all the Canadian players took time to sign autographs and pose for photos with the soccer enthusiasts.

The Canadian players expect to see many of those fans once again on Friday night in Toronto. Canada faces Panama on 7 September at BMO Field in downtown Toronto. The Friday night match is Match Day 3 in the 2012 CONCACAF 3rd Round for 2014 FIFA World Cup Brazil Qualifiers. With six matches to be played between June and October, Canada needs to finish amongst the top-two teams in its group to advance to the CONCACAF Final Round in 2013.

Tickets to Canada-Panama match on 7 September is available via ticketmaster.ca or by phone at 1.855.570.7500, with full information available on CanadaSoccer.com. Group discounts are available via [email protected] or 613.237.7678. Following the Friday 7 September match against Panama at BMO Field, Canada’s next home match is Friday 12 October against Cuba. Canada’s remaining away dates are Tuesday 11 September in Panama and Tuesday 16 October in Honduras.