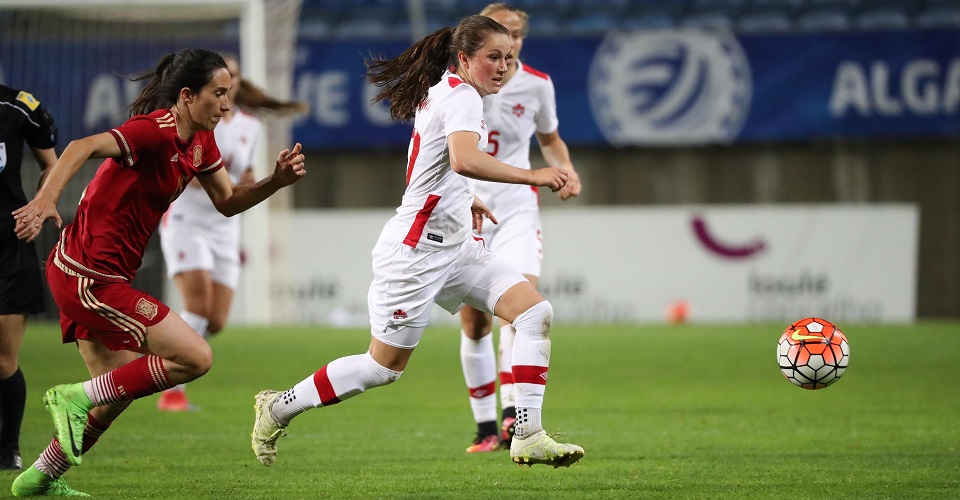 After making the final for the second time in as many tries, defending Champion Canada wasn’t able to convert on numerous chances and fell 0-1 to Spain in the Championship match of the Algarve Cup.
MATCH CENTER: CANADA 0:1 SPAIN

“Spain pressed well in the first half and disrupted our rhythm, but our goal in the first half was to catch them on the counterattack and exploit that high line and we had some good chances,” said Head Coach John Herdman.  “In the second half, we found our rhythm and established better control in the game, had a couple of good chances that should have gone in, and I have to think some of those players will be a bit disappointed with the opportunities lost.”
Canada clocked four crosses and shots on net in the first half, followed by 11 in the second, outshooting Spain by nine shots on net.
“I think Canada should have won the game on the chances that we had, but we haven’t been as clinical as we should be in this tournament,” said Herdman. “I can’t really fault our team on this one. Our girls gave one hell of an effort in the second half trying to pull it back, it’s just that some games are like that.  You can throw everything at it, but it won’t go in.  We’ll take away some learnings from these last two games, but at the same time it was a strong performance from Canada, and next year we’ll be back.”
Placing second, Canada leaves the Algarve Cup 2017 with a 2-1-1 record against four European teams preparing to compete in the UEFA Women’s Euro tournament later this year.
“The Algarve Cup is always a great tournament – one of the best in the world,” said Herdman at the closing press conference.   “It brings in a variety of teams, from Asia, Europe and the Americas, which gives it that little bit extra quality.  You get to play against different styles of play, and Spain was a good style for us to match up against tonight.  They were a really good opponent.  They’ve shown their quality throughout the tournament, and are peaking to be ready for the Euros, so they look a good prospect for that tournament.”
The 2017 XXIV Algarve Women’s Cup featured 12 nations broken out into three groups.  Canada faced Denmark, Portugal and Russia in Group 1.  Group 2 consisted of Iceland, Japan, Norway and Spain; while Group 3 consisted of Australia, China PR, Netherlands and Sweden.
Canada next plays in Sweden on 6 April and in Germany 8 April, before coming home for a two game series against Costa Rica on 8 June in Winnipeg and 11 June in Toronto.  Tickets are now on sale for both home matches.
For our most recent photographs, please visit our Flickr Photostream.
Canada Soccer’s Women’s National Team

Canada recently made history with back-to-back podium finishes at the London 2012 and Rio 2016 Olympic Games. At the last three major women’s tournaments, Canada finished third at the London 2012 Women’s Olympic Football Tournament, sixth at the FIFA Women’s World Cup Canada 2015, and third at the Rio 2016 Women’s Olympic Football Tournament.
Canada Soccer’s Women’s National Team are the first Canadian team to win back-to-back Summer Olympic medals since 1908, and the first-ever women’s Canadian team.
Canada Soccer Women’s National Team Home Matches
Canada Soccer’s Women’s National Team will return home to play Costa Rica in Winnipeg on 8 June and in Toronto on 11 June. The matches will mark the first meetings between the two nations since Canada defeated Costa Rica in February 2016 at the CONCACAF Olympic Qualifying Tournament, securing Canada a spot at the 2016 Rio Olympic Games.
Canada last played in Winnipeg in 2014 against the USA resulting in a 1:1 draw. Kadeisha Buchanan gave the 28,255 fans on hand something to cheer about as she opened the scoring in the first half, but the Americans tied the game with fifteen minutes to go to draw 1:1. At the time, the attendance in Winnipeg was the second highest for a Canadian ‘A’ level women’s international played in Canada.
Toronto fans last saw Canada in action against Brazil as part of the Road to Rio series in June 2016 as Canada prepared for the Rio 2016 Olympic Games. Canada fell to Brazil in that match 0:2 but came back and defeated them 1:0 in Ottawa three days later, and then 2:1 when it mattered most in the Bronze Medal Match of the Rio Olympic Games.
Individual Tickets On Sale
Individual tickets to the Canada v Costa Rica matches will go on sale 8 March 2017 via Ticketmaster.ca and by phone at 1.855.985.5000 (Buy Winnipeg | Buy Toronto). Fans will be able to take advantage of a special ‘Me+3’ offer in select sections for both matches, by purchasing three tickets in the eligible price category, fans will receive the fourth free. Groups of 10 or more are eligible to receive up to 30% off regularly priced tickets. Canadian Supporters have been allocated a number of dedicated sections at both matches, fans wishing to sit in the Canadian supporter sections are encouraged to visit the Voyageurs website for more information and to purchase tickets through thevoyageurs.org. For complete ticket information and to place group ticket requests, visit the event information pages (Winnipeg | Toronto).