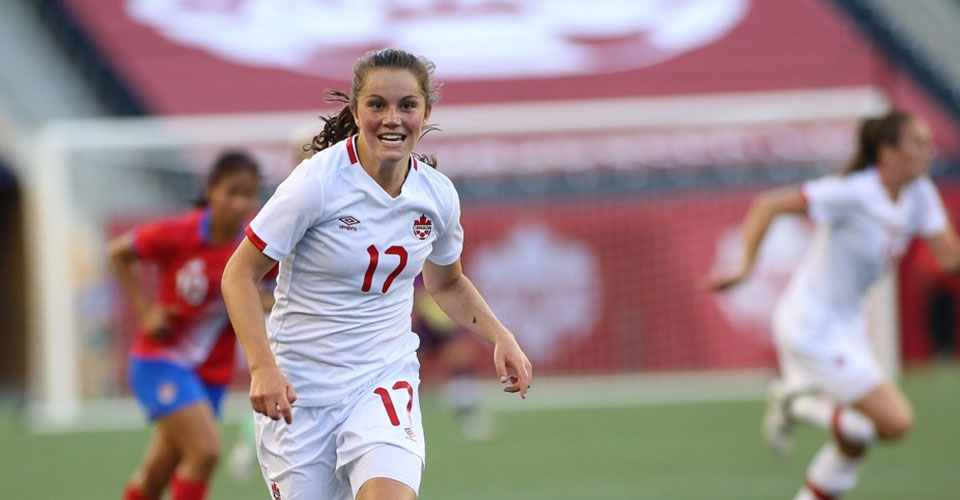 Canada plays big in front of raucous home crowd with 3:1 win in Winnipeg

Score one for the home side. Canada Soccer’s Women’s National Team won 3:1 in their first of two home matches against CONCACAF rivals Costa Rica. Jessie Fleming, Christine Sinclair and Adriana Leon were the goalscorers in the 2017 home victory in Winnipeg.

As part of a three-match Summer of Soccer Series across Canada, the Women’s National Team will next face Costa Rica on 11 June at BMO Field in Toronto. The series wraps up two days later when the Men’s National Team faces CONCACAF rivals Curaçao. All three matches are broadcast live on TSN and RDS.

A terrific crowd of 14,434 enjoyed the 8 June match at Investors Group Field in Winnipeg, with hometown hero Desiree Scott given a standing ovation option when was subbed out in the 72nd minute.

“I am pretty happy with the performance and we will have to do it again in Toronto,” said John Herdman, Canada Soccer’s Women’s National Team Head Coach.

Canada opened the scoring in the third minute on the Fleming goal after she was played in by Sinclair. Canada created numerous chances throughout the first half, then added to their score with the Sinclair penalty goal in the 52nd minute.

“It was a great start for Canada with Jessie Fleming’s goal,” said Herdman. “We started exactly how we wanted with an early goal to take the nerves off. I thought we settled in nicely in the first half and we controlled the game.”

Canada fell briefly on their heels, once clearing a chance from the goal line, then moments later conceding a Diana Saenz goal in the 56th minute. Canada took back control of the game and finally added to their lead in the 91st minute on the Leon goal.

“Finishing strong is a mark of a very good team,” said Herdman. “I thought for the last 20 minutes Canada dominated and took control back of the game.”

The two sides will meet again on Sunday 11 June in Toronto, with a large crowd expected to be cheering for Canada’s Olympic heroes. At half time, fans will have a chance to pay tribute to five Olympic medalists who have recently announced their departure from the international game: Josée Bélanger, Jonelle Filigno, Robyn Gayle, Kaylyn Kyle, and Lauren Sesselmann. Before kick off, CONCACAF champion and former captain Amy Walsh will be inducted as an honoured member of the Canada Soccer Hall of Fame.