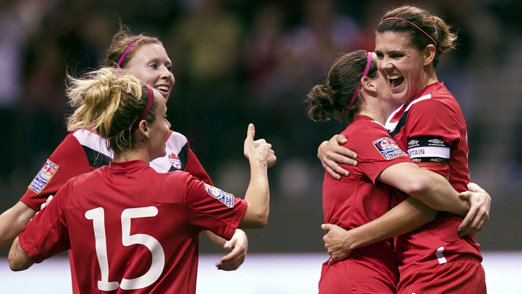 Canada can book a spot at London 2012 with a win over Mexico on Friday.

One win. That’s all that seperates Canada from a place at the 2012 Olympic Games in London.

Canada’s Women’s National Team cruised through group play at CONCACAF Women’s Olympic Qualifying in Vancouver scoring 13 goals and only conceding one, but the Canadians will need to defeat Mexico on Friday 27 January (20.00 local kick-off) at BC Place to achieve their Olympic dream.

Friday’s semi-final will be broadcast live in Canada at 23.00 ET / 20.00 PT on a variety of Sportsnet HD platforms as well as online at Sportsnet.ca.

“It’s going to be a tough game,” said Head Coach John Herdman after Canada’s training session at BC Place.

“Mexico has a new look about the way they play and some new players, so I think they’re a threat.”

Canada 2012: Herdman looks ahead to Mexico

The last time Canada and Mexico cam together was in 2010 in the dramatic final of the FIFA Women’s World Cup Qualifiers™ tournament in Mexico. Canada defeated Mexico one-nil on the day courtesy of a goal by Christine Sinclair to be crowned CONCACAF Champions on Mexican soil.

With an Olympic berth on the line and Mexico looking to avenge their 2010 defeat on home turf, Friday’s match at BC Place promises to be a tense night of international football.

“I think there is massive pressure,” said Herdman. “But you either see it as a burden or you go towards it, that’s what makes people’s careers.”

Herdman’s side will need the full support of the Canadian fans in Vancouver to help give his team the extra edge over their opponents and the team has repeatedly urged supporters to come out and be the ‘12th man’ as Canada makes one final push for a place at the London games.

Complete ticket details for Friday’s match are available at: canadasoccer.com/madeforthis.

Tournament organizers confirmed on Thursday that more seating at BC Place has been opened up in response to the growing demand for tickets for Friday’s decisive semi-final.

Should Canada defeat Mexico on Friday it would go on to face the winner of the USA v Costa Rica final on Sunday 29 January.

Canada 2012: #canWNT looking ahead to Mexico