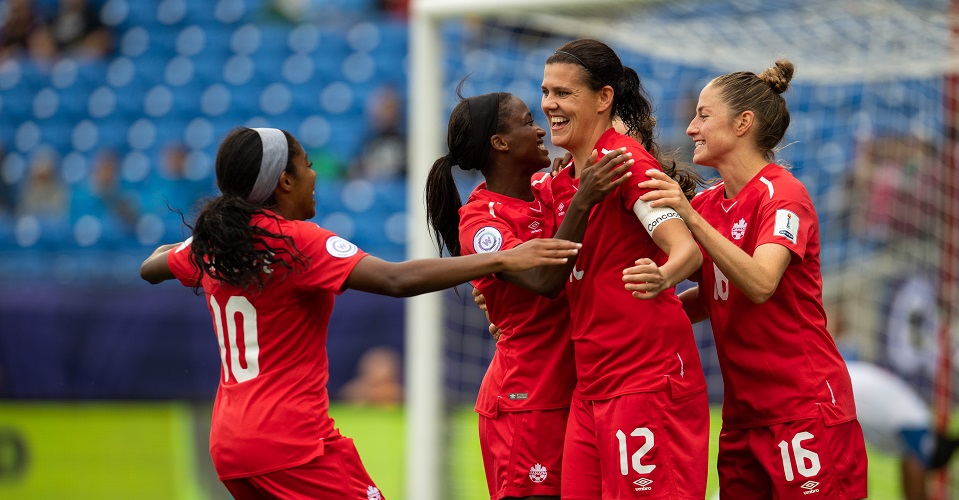 Canada has qualified for next summer’s FIFA Women’s World Cup France 2019™ after defeating Panama 7:0 in the tournament Semi-Final in Frisco, Texas.   Canada will now […]

Canada has qualified for next summer’s FIFA Women’s World Cup France 2019™ after defeating Panama 7:0 in the tournament Semi-Final in Frisco, Texas.
Canada will now move on to the Final against the winner of tonight’s second Semi-Final match between hosts USA and Jamaica.  The Final will be held on Wednesday, 17 October at 20:00 ET/17:00 PT and fans can watch the match on Concacaf Go at cwc.concacafgo.com and follow Canada Soccer on Facebook, Instagram, and Twitter.
“I’m very happy for this team. For us, qualifying that’s the only thing we talked about getting here, that was for us to qualify,” said Canadian Women’s National Team Head Coach Kenneth Heiner-Moller. “Right now, everyone needs to decompress a little bit. We’ve qualified so now we need to set a new goal.”
Canada had much of the possession for the first 20 minutes but were unable to break through Panama’s back line. Allysha Chapman had the best chance after a defender error but her shot at the inside post was saved by Farissa Cordoba. Canada finally broke through in the 44’ when Janine Beckie took a ball wide from Allysha Chapman and swung in a long cross to the back post for Christine Sinclair who confidentally headed home for her 176th career goal to give Canada a 1-0 lead heading into halftime.
Canada did not let up the pressure from the start of the second half scoring three goals in six minutes. Canada’s second goal came from a build up initiated by Allysha Chapman with a ball played in to Diana Matheson who dummied it for Rebecca Quinn. Quinn crossed the ball across goal and Player of the Match Jessie Fleming headed it home. Just three minutes later, Schmidt played the ball wide to halftime substitute Nichelle Prince. Prince served a ball up for Christine Sinclair who, despite being defended by two Panamanians, headed it home for her second of the match. Canada did not let up as Jessie Fleming played a perfect penetrating pass from half through to a running Janine Beckie who took a touch and buried for Canada’s fourth goal.
“The first half wasn’t really what we wanted it to be, but, we went into the locker room and said that we needed to get a bit more pace getting into the box, a bit more aggression getting into the box and people wanting to get on the end of crosses.” Fleming said. “We’re pretty excited. Qualifying was our main goal coming into the tournament and now we get an opportunity to play against either the US or Jamaica in the Final.”
Janine Beckie’s free kick in the 64’ made it through to the goalkeeper who parried it directly into the path of Rebecca Quinn.  Quinn calmly buried for Canada’s fifth. In the 76’, Nichelle Prince took a Jessie Fleming header wide and beat her defender before passing a ball along to Adriana Leon for her competition leading fifth goal. Just two minutes later, Leon scored again on a volley off a nice touch by Prince.
“The first half was nervy. We expected our possession on the ball would have created more chances,” said Heiner-Moller. “We thought it was an in-front game, playing in front of their back four, but, it was actually an in-behind game and we identified that in the break. There were a few changes, but, it was more down to being comfortable and bringing that Canadian DNA.”

Heading into the Semi-Final undefeated, Canada had been building momentum against its opponents scoring 17 goals while conceding only one.  Canada defeated Jamaica 2:0 in its opening match; went on to defeat Cuba 12:0 in its second match; and earned top spot in Group B with a 3:1 win over Costa Rica in its third group stage match.
Looking ahead to the Final
Tonight’s Semi-Final match between the USA and Jamaica will determine Canada’s opponent for the Final of the 2018 CONCACAF Women’s Championship.
Canada have played the USA 59 times since 1986, most recently in a two-game series in 2017 that saw Canada draw the reigning FIFA Women’s World Cup Champions 1-1 on home soil in Vancouver before falling 3:1 in San Jose in the second leg.  Long a powerhouse in the women’s game, the USA have seen nations including Canada rise in the ranks and steadily threaten their current number one ranking. Canada’s last five games against the USA have resulted in two ties and three losses with close scoring lines.
Despite having won seven of its clashes against Jamaica, including the opening match in this tournament, Jamaica has provided fierce competition in the Concacaf Women’s Championship as they strive to make its mark on the confederation.  Well organised and dangerous on the counter attack, Jamaica have shown incredible development since Canada’s previous match against the Caribbean nation outside of the tournament, an 11:1 victory in 2007.
Line Ups
Canada’s Semi-Final starting XI featured Stephanie Labbé in net, Ashley Lawrence at right back, Kadeisha Buchanan and Rebecca Quinn at centre back, and Allysha Chapman at left back.  Jessie Fleming, Sophie Schmidt and Julie Grosso made up the midfield, while Diana Matheson, making her 200th appearance for Canada Soccer’s Women’s National Team joined Janine Beckie up front with Captain Christine Sinclair.