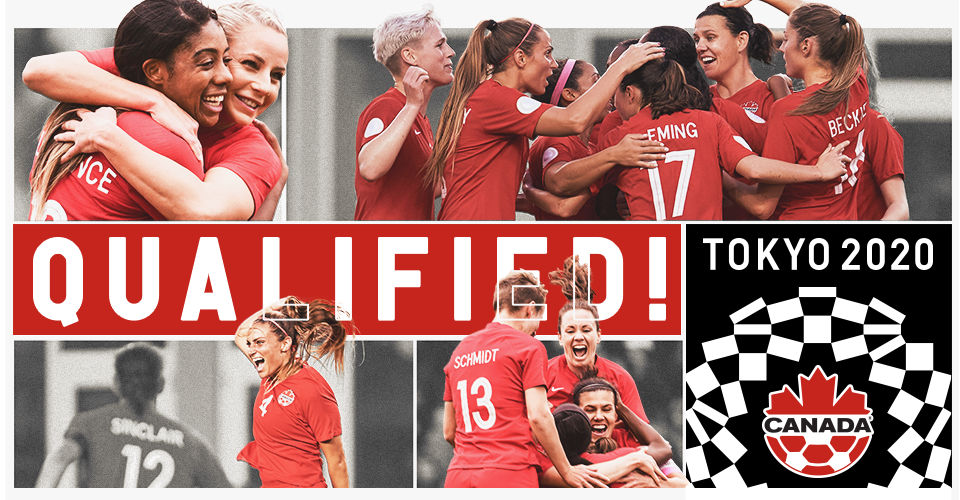 Canada have qualified for the Olympic Games for the fourth consecutive cycle after a 1:0 victory over Costa Rica at the 2020 Concacaf Women’s Olympic Qualifying […]

Canada have qualified for the Olympic Games for the fourth consecutive cycle after a 1:0 victory over Costa Rica at the 2020 Concacaf Women’s Olympic Qualifying Championship. Jordyn Huitema scored the lone goal in the Concacaf semi-final victory as Canada also advanced to the Sunday championship final.

Canada are one of only five nations in the world to qualify for each of three previous Women’s Olympic Football Tournaments and the only nation to reach the podium at both London 2012 and Rio 2016.

“Costa Rica made it difficult, but we dominated, we finally got one, and we were so solid defensively that we weren’t going to give one up after that,” said Canadian captain Christine Sinclair. “Going to the Olympic Games never gets old and every one brings a different story and different experience. We can now look forward to getting back on that podium.”

With the win, Canada also advanced to their fourth consecutive final at the Concacaf Women’s Olympic Qualifying Championship, this time to be played Sunday 9 February at the Health Dignity Park in Carson, California. The match will be broadcast live in Canada on OneSoccer.ca as well as on Rogers TV, SaskTel, and TELUS (18.00 ET / 15.00 PT). Fans will find extended coverage across Canada Soccer’s digital channels on Facebook, Youtube, Instagram, and Twitter featuring the social media hashtag #CANWNT.

“We have so many skillful players that we are able to rotate our starting players and keep everyone fresh, so come game time everyone is able to really perform and come out at 100 percent,” said Canadian goalscorer Jordyn Huitema. “I think it really showed tonight how fresh, versatile and hungry our team was as we just pushed until that last whistle.”

In the first half, Canada held the edge in possession and perhaps had some of their best pressure midway through the period. On one chance in the 23rd minute, an Allysha Chapman cross from the left got a lovely touch back from Janine Beckie in the middle, but Costa Rica cleared. Then late in the half, Jordyn Huitema created a dangerous cross from the left which passed behind a trio of Canadian attackers. Just before the whistle, Beckie broke through and fired a low shot on goal, but goalkeeper Noelia Bermúdez made the save.

In the 58 minute, Huitema had a good run into the box, but her shot was blocked by the defender. Just three minutes later, a Chapman cross from the left was knocked just wide of the back post by Beckie. Another two minutes later, Sinclair won the ball deep in the box and centered a pass, but the chance was cleared by Stephanie Blanco.

In the 67th minute, Beckie’s cross from inside the box was just tipped away by Bermúdez.

The breakthrough finally came in the 72nd minute after some lovely possession by Ashley Lawrence on the right. Lawrence moved in, played the ball to Beckie who quickly played it forward for Rose inside the box; Rose then crossed for Huitema who struck her first shot off the post, but then immediately knocked in the rebound with her right foot.

From there, Canada shut things down with all 10 outfield players chipping in on the defence as Stephanie Labbé posted the clean sheet. In one final attacking chance in added time, Sinclair fed Beckie who quickly chipped an out-of-position Bermúdez, but the ball sailed over the crossbar.

Before kickoff, Canadian captain Christine Sinclair was honoured by Concacaf for setting the world’s all-time international goalscoring record. Concacaf President Victor Montagliani presented both the record-breaking game ball and a framed, commemorative “Sinclair 185” jersey as part of the pre-match presentation.

Canada’s starting lineup featured Stephanie Labbé in goal, Janine Beckie and Allysha Chapman as fullbacks, Sophie Schmidt, Kadeisha Buchanan and Shelina Zadorsky at centre back, and Ashley Lawrence, Desiree Scott, Jessie Fleming, Jordyn Huitema and Christine Sinclair from the midfield up through to the attack. In the second half, coach Kenneth Heiner-Møller replaced Fleming with Deanne Rose (64’).

Canada Soccer’s Women’s National Team will come home this Spring when they face Australia in Vancouver on Tuesday 14 April. The home international soccer match will provide Canadian fans will an opportunity to see their favourite players live in action at BC Place (19.30 local kickoff).

Tickets are on sale now starting as low as $20 via Ticketmaster.ca (or by calling 1.855.985.5000), with complete information available via CanadaSoccer.com/tickets. Group discounts of up to 30% off the regular price are available for orders of 10 or more tickets using the Group Order Form (link: https://form.jotform.com/200154693493255). A special Me+3 ticket package can be purchased directly via Ticketmaster.ca (link: www1.ticketmaster.ca/event/11005835BC6A3A46?brand=canadasoccer).

Beyond the Concacaf Women’s Olympic Qualifying Tournament in January and February, Canada will face France, Netherlands and Brazil at the Tournoi de France (4-10 March) and then Australia at home in Vancouver (14 April).