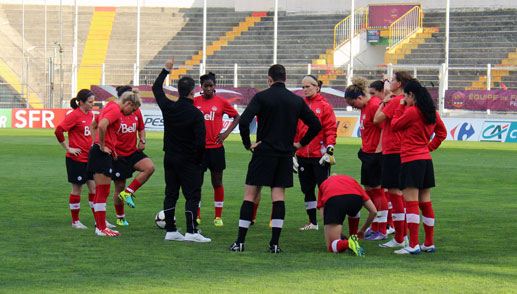 Canada readies for clash against France

Canada’s Women’s National Team was hard at work training in Nice on the eve of its clash against France. The Canadians will take on France at Stade du Ray in Nice on Thursday 4 April (18.30 local kick-off; 12.30 ET / 9.30 PT).

Throughout this camp, Head Coach John Herdman has been challenging his players to step out of their comfort zone and so far the squad has been responding well.

“We have had a solid five days and the team has worked extremely hard on and off the pitch,” said Head Coach John Herdman.”We’re entering this match with the mindset that regardless the result, the players will learn from the experience. We’re also looking forward to provide some of our younger players the opportunity to face a tier one opponent like France.”

Of note, a late addition was made to the roster that will be available for Coach Herdman for these two matches. Full back Kylle Sjöman, who currently plays in the German Bundesliga II Division, has been called into her first level “A” camp since she competed for Canada’s youth teams in 2003 and 2004.

Canada will be facing a hungry France team for the first time since their now historic confrontation at the Women’s Olympic Football Tournament when Canada won the Olympic bronze thanks to a dramatic goal in added time by Diana Matheson.

“The French are a formidable opponent, unbeaten this year and who are peaking for the Euros,” added Herdman. “We know they will want to post a good showing so it will be our job to disappoint them.”

“This is a big test for us at this stage in our preparation, but with USA and Germany just around the corner, it doesn’t get any easier – nor would we want it to be!”

The Canada-France match will be streamed live on Sportsnet.ca and fans will be able to follow live coverage on Twitter @CanadaSoccerEN. Post-match and highlights will also be available on canadasoccer.com and CanadaSoccerTV.

Canada has an all-time record of 4 wins, 2 draws and 3 losses against the French since 1985.

Canada will conclude this tour when it travels to Rotherham to face off against England on Sunday 7 April (15.00 local kick-off; 10.00 ET / 7.00 PT). This match will also be streamed live on Sportsnet.ca.