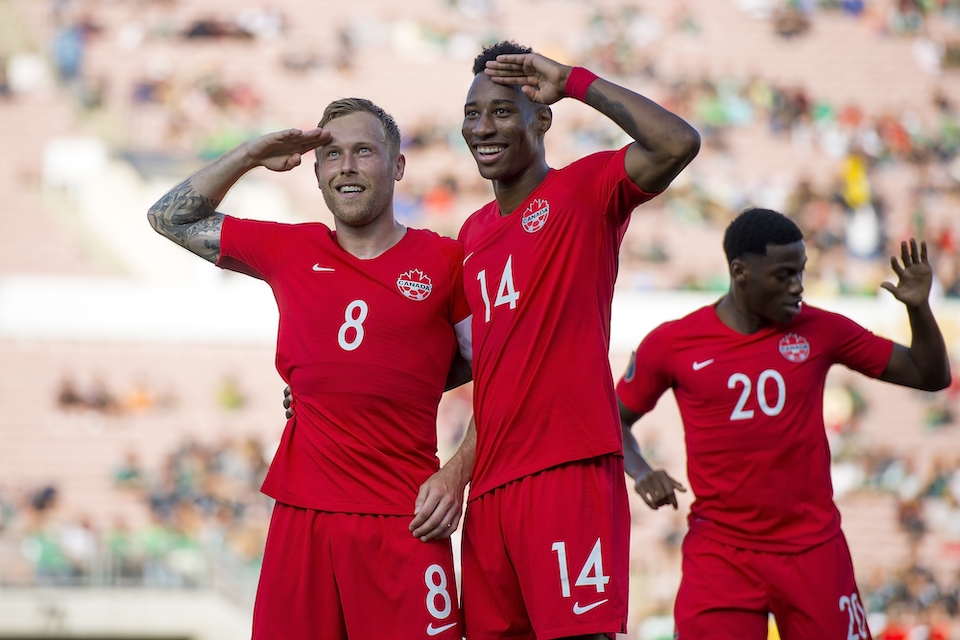 Building on an impressive attacking display in its opening 4:0 victory over Martinique, Canada’s Men’s National Team is preparing to face Mexico in its second group […]

Building on an impressive attacking display in its opening 4:0 victory over Martinique, Canada’s Men’s National Team is preparing to face Mexico in its second group stage match at the 2019 Concacaf Gold Cup on Wednesday, June 19 at Broncos Stadium, in Denver, Colorado.

The highly anticipated Group A match will kick off at 22.00 ET / 19.00 PT and be broadcast live on TSN 1,4,5 & RDS 2. In addition to the national broadcast, extended match day coverage will be featured across Canada Soccer’s digital channels including Twitter, Instagram and Facebook. Fans are encouraged to follow Canada Soccer’s Men’s National Team every step of the way by using #CANMNT.

“Taking on Mexico will be our biggest challenge to date and we’re looking forward to it,” said John Herdman, Canada Soccer’s Men’s National Team Head Coach and Men’s National EXCEL Director. “This match presents something different, we’re going in as underdogs, we’ve not had that opportunity for a long time. We’re in a tournament, coming up against Mexico in our second game, and our goal is to advance out of the group stage so as a team we have a lot of factors to consider. We’ll give it our best and look forward to learning from this match about our group.”

In its opening match win, Canada was led by goals from Jonathan David (two), Junior Hoilett, and Scott Arfield. The strong performance set a number of new marks for the Canadian program as the 4:0 score line was Canada’s largest margin of victory at the Concacaf Gold Cup and four goals scored matched its previous high at the competition. On an individual level, goalkeeper Milan Borjan set a new record with four career clean sheets at the Concacaf Gold Cup and David became the second teenager to score for Canada at the competition, following teammate Alphonso Davies’ performance in 2017.

As a team, Canada has now tied its longest ever winning streak at six matches, dating back to John Herdman’s debut as head coach against New Zealand in March of 2018. Within this window, Canada was undefeated through the Concacaf Nations League Qualifying stage with four wins, 12 points, 18 goals scored and with just one goal conceded to finish 2nd amongst 34 nations.

“The belief I have in this team is massive, we’ve grown since the last Gold Cup,” said Alphonso Davies “We have a number of players playing at the highest level and we are looking forward to proving that we can compete at this level and make a difference in the sport in Canada.”

Defending Concacaf Gold Cup champions Mexico come into the match having decisively beaten Cuba 7:0 in its opening match of the competition. The powerful Mexicans have won the Concacaf Gold Cup seven times and are in impressive form under recently appointed head coach Gerardo “Tata” Martino.

“Going into the Mexico game, we all know it’s going to be a tough one, Mexico is a top side, it will be a good test for Canada as we have a new identity, a new structure and a new team, and this will be a good opportunity for us to test ourselves,” Davies said. “Every player on our roster is looking forward to this match, as a footballer this is where you want to be, playing against the biggest teams on the biggest stage and every player on this team is ready to give their all on Wednesday. For me, putting on the Canada shirt, is something that you dream of, playing for your country is a dream come true always.”

Canada will play its third and final group stage match against Cuba on Sunday 23 June in Charlotte, North Carolina (18.00 ET kick off). From 16 nations divided into four groups, the top two nations from each group will advance to the 2019 Quarterfinals.