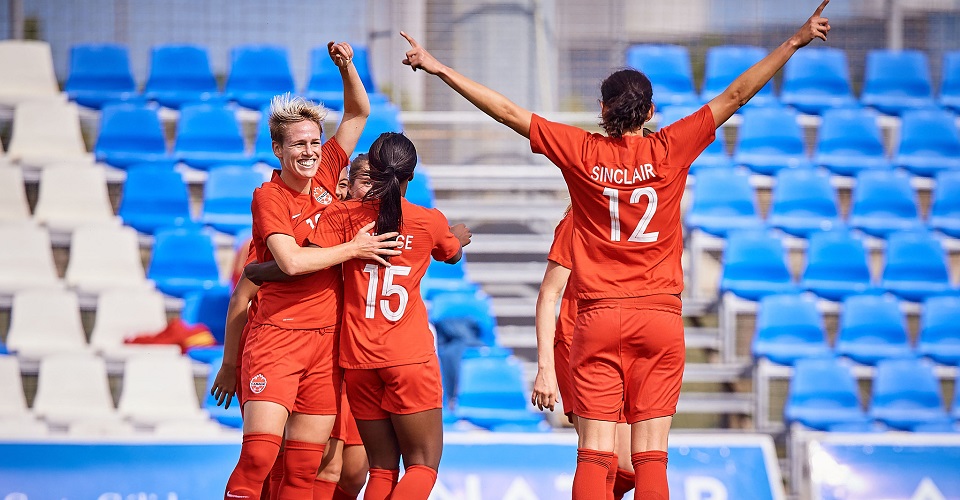 Canada Soccer’s Women’s National Team are ready to face Concacaf rivals Mexico in a Send-Off match before the FIFA Women’s World Cup France 2019™. The match, scheduled for Saturday 18 May in Toronto, will serve as an important tune-up before final squad selections are confirmed at the end of the month.
The Canada-Mexico match kicks off at 13.00 local at BMO Field in downtown Toronto and will be broadcast live on TSN, RDS and OneSoccer.ca (13.00 ET / 10.00 PT). For fans, this will be one last chance to show their support for Canada before they head to Europe for their pre-competition training camp ahead of the 10 June FIFA Women’s World Cup™ group opener against Cameroon in Montpellier, France. Tickets to the Toronto match start as low $20 via Ticketmaster.ca. A special ‘Me+3’ ticket offer is also available with complete ticketing information available via canadasoccer.com/tickets.
“Heading into an away FIFA Women’s World Cup, we hope that the echo from our Canadian fans back home will carry us through our month in France,” said Kenneth Heiner-Møller, Canada Soccer’s Women’s National Team Head Coach and Women’s National EXCEL Director. “The players are really looking forward to having the fans cheering for us, so we will put on a show and give us the momentum as we head to France. It is important that both our performance and fan support at our send-off match in Toronto has a resounding effect on our players for a long period of time.”
Concacaf rivals Canada and Mexico have a long history against each other in international competition, with Canada winning each of the last three matches since January 2015. The two sides have also faced each other twice in Concacaf finals, with Canada winning the 1998 Concacaf Women’s Championship 1:0 in Toronto and the 2010 Concacaf Women’s Championship 1:0 in Cancún.
“Mexico are a tough team to open up as they defend very well and they have been doing that for a long period of time,” said Heiner-Møller. “It’s about finding a way to get through their defending structure. I think we have the skills for it and we are working on our organisation to do it, so hopefully we’ll find some of these cracks.”
While Canada have qualified for seven consecutive editions of the FIFA Women’s World Cup™, Mexico will miss out on this summer’s finals after being eliminated in the group stage of last year’s Concacaf Women’s Championship. Mexico now have their sights set on next year’s Concacaf Women’s Olympic Qualifiers from which two Concacaf nations will qualify for the 2020 Olympic Games in Tokyo.
“They have a good league in Mexico and they will be a tough opponent on Saturday afternoon in Toronto,” said Sophie Schmidt, Canada Soccer Women’s National Team midfielder. “We will have to be the one that comes out and dictates the tempo of the play. We have to make sure we make the most of this and take the gains and the confidence out of this game and take it over to Europe ahead of the FIFA Women’s World Cup.”
Canada Soccer’s Women National Team is hoping that this send-off match in front of Canadian fans will give them the momentum as they head to Europe.
“We want to show Canada what we are about going in this FIFA Women’s World Cup,” said Rebecca Quinn, Canada Soccer Women’s National Team centre back and midfielder. “Hopefully, we’ll get the hype going leading us into France.”
The match will also provide fans with an opportunity to watch Christine Sinclair on home soil as she closes in on the International goal scoring record of 184 goals. Sinclair, who has three goals in five games thus far in 2019, has 180 international goals in her career, and 16 career goals against Mexico. She has had four multi-goal games against Mexico in her career.
CANADA AT THE FIFA WOMEN’S WORLD CUP FRANCE 2019™
Following Canada’s 10 June opener against Cameroon in Montpellier, Canada will face New Zealand on 15 June in Grenoble and Netherlands on 20 June in Reims. Beyond the group phase, two or three nations from Canada’s group will advance to the Round of 16 with those initial knock-out matches to be played from 23-25 June. Beyond the Round of 16, the Quarter-finals are 27-29 June, the Semi-finals are 2-3 July, and the FIFA Women’s World Cup France 2019™ Final in 7 July.
CANADA AT THE FIFA WOMEN’S WORLD CUP : http://canadasoccer.com/?t=project&sid=1272
Fans are encouraged to be part of Canada’s journey at the FIFA Women’s World Cup™ from 10 June to 7 July by watching all the action live on TSN and RDS. Fans can also follow the Women’s National Team both on and off the pitch across Canada Soccer’s digital channels including CanadaSoccer.com, Facebook, Twitter, and Instagram.
OLYMPIC MEDAL WINNERS & CONCACAF CHAMPIONS
Canada are two-time Olympic bronze medal winners (2012 and 2016) and two-time Concacaf champions (1998 and 2010). In all, Canada have participated in seven consecutive editions of the FIFA Women’s World Cup™ (1995 to 2019) and three consecutive editions of the Women’s Olympic Football Tournament (2008 to 2016). At Rio 2016, Canada Soccer’s Women’s National Team were the first Canadian Olympic team to win back-to-back medals at a summer Olympic Games in more than a century.
WOMEN’S NATIONAL TEAM: https://www.canadasoccer.com/women-s-national-team-p144312
Canada Soccer’s Women’s National Youth Teams, meanwhile, have won four Concacaf youth titles: the 2004 and 2008 Concacaf Women’s Under-20 Championship, the 2010 Concacaf Women’s Under-17 Championship, and the 2014 Concacaf Girls’ Under-15 Championship. Canada have qualified for seven editions of the FIFA U-20 Women’s World Cup (including a silver medal at Canada 2002) and all six editions of the FIFA U-17 Women’s World Cup (including a fourth-place finish at Uruguay 2018).