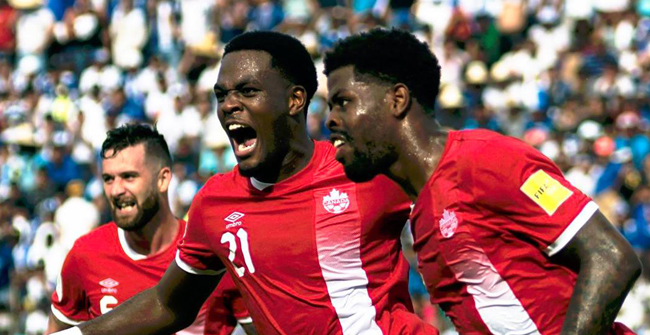 Canada remain in third place after trip to Honduras

Canada remain in contention to advance to the “Hex” round of the 2018 FIFA World Cup Russia Qualifiers but will need all three points when they meet El Salvador on Tuesday 6 September at BC Place in Vancouver, BC in their final match of the semi-final stage.

With Mexico already advancing out of Group A with 15 points, Canada now sit third with four points after the 1:2 result in front of a boisterous home crowd of close to 40,000 in San Pedro Sula, Honduras on 2 September. Honduras are in second place with seven points and head to Mexico City to face Mexico on 6 September. El Salvador are currently in fourth place with two points.

A home victory by Canada on 6 September in Vancouver over El Salvador (19:00 PT, 22:00 ET Tickets Broadcast: TSN1, TSN3, TSN4, TSN5 and RDS) combined with a Mexico defeat over Honduras in the other Group A match being played concurrently would see Canada and Honduras tied on seven points. Canada would also need to overcome a five goal differential to secure the second and final spot in the “Hex”.

“It wasn’t fully the positive result we wanted,’ Head Coach Benito Floro said. “Honduras stifled us and did not allow for our desired ball movement. But it was a good performance that opened the door for the next match. We still think it’s possible, we believe we can win our next match and we hope the fans will come out to support us in Vancouver.”

An emphatic headed goal from Manjrekar James off a lofted corner from Scott Arfield in the 32nd minute at Estadio Olímpico Metropolitano gave Canada a 1-0 lead against home side Honduras on Friday. However, Honduras goals in added time of the first half and just six minutes into the second secured a 2-1 victory and all three points for the home side.

“When you come here you know exactly what you’re gonna get. Even before the warm up there were thousands in the stands,” said Scott Arfield. “It was up to us to quiet them down which we did, but, it was very disappointing just before half time. In the second half we didn’t quite go and try and score that second goal.”

Support your #CanadaRED on Tues. Sept.6 at BC Place in Vancouver. Secure your seats at https://t.co/ZzVLpHip3a pic.twitter.com/TA4pPdBHNg

SUPPORT #CANADARED, BE CANADA’S 12th MAN
Canada will return home to face El Salvador on 6 September at BC Place in Vancouver. Canada will need the support of the 12th man at home to help build a sea of #CanadaRED supporters, tickets to the match start as low as $25 (plus applicable fees). In addition, a special ‘Me+3’ offer will be available for this match. When purchasing three full price tickets in select sections, fans will receive the fourth one free. This offer is available via Ticketmaster.ca by selecting the ‘Me+3’ offer.

Group discounts are available with groups of 10 or more eligible to receive discounts of up to 30% off regularly priced sections. To request group tickets, complete the group order form indicating the price point and quantity of tickets you are wishing to purchase. Please note that group tickets will be processed on a first come, first served basis. For complete information visit the group ticket section on CanadaSoccer.com/Tickets

BC Place Club Seats offer fans a premium match day experience featuring exclusive entrances, in-seat service, larger comfortable seats, exclusive club lounges with a full-service private bar and heightened food offerings, all from some of the best views in the venue. Fans purchasing club seats will receive a complimentary Canada Soccer scarf (retail value of $30) upon arrival to their seats on match day.

The 2018 FIFA World Cup Russia™ is the biggest single-sport event in the world. From 211 member associations from around the world, 32 finalists will qualify for the 32-day event that is played in 11 cities from 14 June to 15 July 2018.

Canada are amongst the 12 CONCACAF nations in the hunt for a spot at the 2018 FIFA World Cup Russia™. The remaining nations have been split into three groups for the continent’s 2015-2016 semi-final stage. The top two nations in each group will advance to the final round in 2017, from which three nations qualify for Russia 2018 and the fourth team advances to an intercontinental playoff.