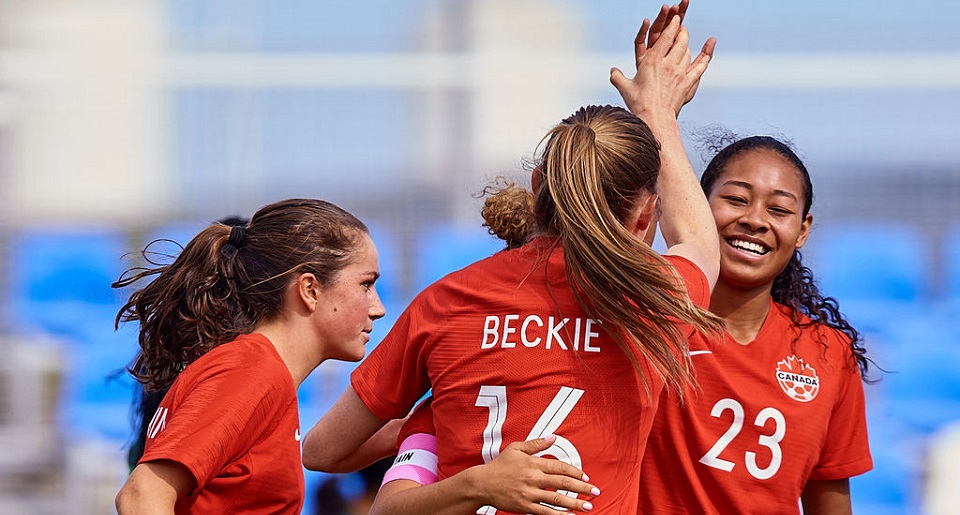 Canada remains undefeated in 2019 after 2:1 win over Nigeria

Canada Soccer’s Women’s National Team remain undefeated in 2019 after defeating Nigeria 2:1 at Pinatar Stadium in Murcia, Spain. Canada’s win over the CAF Champions brings its 2019 record to 4-2-0 and marks its first victory over Nigeria in three encounters.

“It definitely was a battle. They gave us some physical challenges but I think we stood up to it. The most important thing was we showed composure, after going 1-0 down, it’s about keeping our structures right and keeping our composure. The second half was about us having more players in the penalty area and we definitely became more dangerous,” said Head Coach Kenneth Heiner-Møeller. “This camp was all about partnership and sharpening the tools. It’s about finding more than one player to each position and I think we solved that. It’s a great group, in total, a great camp and two great wins.”

Canada started the first half playing with a young lineup and into a strong wind. While the team enjoyed spells of possession, the wind impeded Canada’s attack for much of the opening frame. Nigeria’s Desire Oparanozie opened the scoring on the counter attack in the 27’. Canada’s backline had pressed high up the pitch working to play through on the ground and a turnover lead to Oparanozie being sprung behind centre backs Kadeisha Buchanan and Shelina Zadorsky. Buchanan got back to make a sliding challenge, however, Oparanozie took a touch around the sliding defender and slotted the ball past Canadian goalkeeper Erin McLeod.
Canada made three substitutions to start the second half and equalized immediately following halftime with Janine Beckie scoring in the 47’. Jayde Riviere played a ball into Christine Sinclair who, after an arial battle with a Nigerian defender, saw the ball bounce behind her to a waiting Janine Beckie who made no mistake with a solid strike in the top left corner. Canada soon went ahead with Sophie Schmidt scoring in the 53’. Riviere again played provider swinging a ball in from the wing onto the head of Schmidt who directed it home. Canada nearly made it three in the 75’ minute after Ashley Lawrence played a hard cross on the ground to Sinclair, who dummied the ball to Beckie but the Nigerian defender made a great sliding block. Christine Sinclair nearly had her 181st career goal in the 89’ after Schmidt played her into the Nigerian 18 but Sinclair’s shot was cleared away by a Nigerian header.
“I think it was a very physical game, there were a lot of fouls out there, but once we got over that initial shock, we were able to play around them and create a lot of opportunities,” said Allysha Chapman. “I think it’s building a lot of momentum for us, getting two wins is great and just hope to build that into the next camp.”

Nigeria has qualified for every edition of the FIFA Women’s World Cup and is also preparing for France 2019, where they will face Norway, Korea Republic and hosts France in Group A.
Canada’s Starting XI featured Goalkeeper Erin McLeod with defenders Ashley Lawrence, Kadeisha Buchanan, Jayde Riviere and Shelina Zadorksy. Desiree Scott captained the squad and anchored the midfield alongside Julia Grosso and Jessie Fleming. Nichelle Prince, Janine Beckie and Jordyn Huitema combined for Canada’s front line.

Heiner-Møller replaced Huitema with Christine Sinclair, Grosso with Sophie Schmidt, and McLeod with Sabrina D’Angelo (46’) to start the second half. Riviere was replaced with Allysha Chapman and Prince with Deanne Rose (72’), and Beckie with Jenna Hellstrom (85’).

Canada’s Starting XI featured Goalkeeper Erin McLeod with defenders Ashley Lawrence, Kadeisha Buchanan, Jayde Riviere and Shelina Zadorksy.  Desiree Scott captained the squad and anchored the midfield alongside Julia Grosso and Jessie Fleming.  Nichelle Prince, Janine Beckie and Jordyn Huitema combined for Canada’s front line.
Heiner-Moller replaced Huitema with Christine Sinclair, Grosso with Sophie Schmidt, and McLeod with Sabrina D’Angelo (46’) to start the second half. Riviere was replaced with Allysha Chapman and Prince with Deanne Rose (72’), and Beckie with Jenna Hellstrom (85’).
Canada Soccer Send-Off Home Match
Canadians will have an opportunity to see Canada Soccer’s Women’s National Team at home before the FIFA Women’s World Cup when they play a “Send-Off” match against Mexico in Toronto at BMO Field on 18 May at 13:00 ET/10:00 PT.  To catch Canada Soccer’s Women’s National Team at home before they head to France, visit canadasoccer.com/tickets for full information.

At the last three major women’s tournaments, Canada finished third at the London 2012 Women’s Olympic Football Tournament, sixth at the FIFA Women’s World Cup Canada 2015™, and third at the Rio 2016 Women’s Olympic Football Tournament.
About Canada Soccer
Canada Soccer, in partnership with its membership and its partners, provides leadership in the pursuit of excellence in soccer, both at the national and international levels. Canada Soccer not only strives to lead Canada to victory but also encourages Canadians to a life-long passion for soccer. For more details on Canada Soccer, visit the official website at canadasoccer.com
For our most recent photographs, please visit our Fli