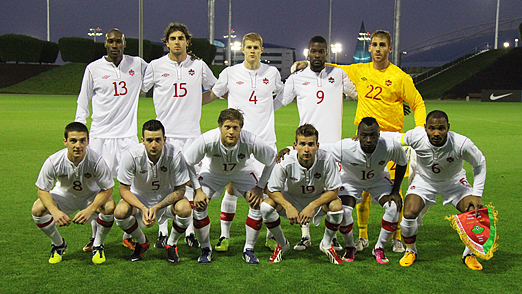 A number of chances went begging for Canada as they were defeated 2:0 by Belarus in a Men’s Internationa Friendly at the Aspire Zone in Doha, Qatar on Monday 25 March.

Vitali Radzionau and Uladzimir Khavaschynski provided the goals as Belarus converted its two best opportunities while the Canadians squandered a number of good looks on goal.

The game was also marked by its intensity – with both teams receiving multiple yellow cards and Belarusian Head Coach Georgy Kondratiev being ejected from the match early in the second half.

“We lost 2:0 and that doesn’t tell the story of the game.

“I thought we played well, controlled a large part of the possession and created chances. But that’s football…”

While disappointed by the loss – the Canadian coach was pleased with the effort and graft his side put into the game.

“There is no such thing as a friendly, that’s the way it should be,” said Fonseca.

“Our players got into it and I loved the commitment they showed.”

Canada had a number of chances in the game with perhaps the best opportunity of first-half going to Marcel De Jong.

The Canadian left-back whipped in a free-kick effort but it dipped over the bar.

Tosaint Rickett, Will Johnson and Marcus Haber had chances in the second half – but none of the three were successful in finding the right touch in front of goal.

Canada’s next competitive action is schedule for July when the team will take part in the CONCACAF Gold Cup in USA.