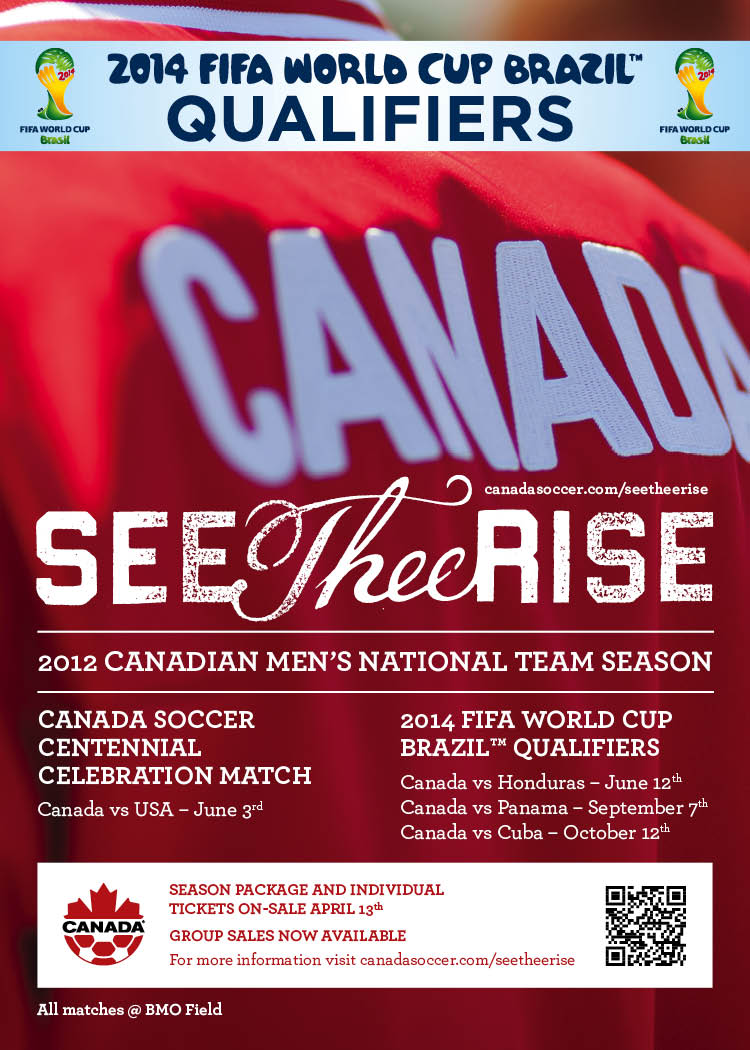 The stage is set for Canada’s 2012 home schedule as the mission to the 2014 FIFA World Cup Brazil™ continues this summer at BMO Field in Toronto, ON. Ticket information for Canada’s four home matches in 2012 was released ahead of the 13 April public on-sale date.

The 2012 home season will kick off with a special Centennial Celebration International Friendly match against cross-border rivals USA on 3 June before Canada resumes hostilities with familiar foe Honduras in a highly anticipated 2014 FIFA World Cup Qualifiers™ showdown on 12 June. The season concludes with crucial home matches against Panama on 7 September and Cuba on 8 October.

New for 2012, a full Season Package featuring all four home matches is available: it provides excellent value to fans with four world-class matches for the price of three. In addition, a special Season Opener Package is available for the two June matches, also featuring a discounted price.

Individual tickets for the 2014 FIFA World Cup Qualifiers™ range from $25 to $50 while the Canada- USA Centennial match tickets are available from $30 to $55. Family four packs are available starting at $85 for individual matches.

Season Packages, Season Opener Packages and individual tickets will go on sale 13 April 2012 at 10.00 ET / 07.00 PT to the general public. Fans that will have joined the newly established Canada Soccer Supporters Club before 1 April 2012 will have access to a special pre-sale opportunity.

Starting on 7 March 2012, Group Sales (10 or more) are available for the 2012 Season and feature volume price discounts. Groups organizing support for Canada are eligible to receive exciting benefits, including complimentary tickets and the opportunity to attend a Canadian training session!

Building on the momentum generated during the previous round of 2014 FIFA World Cup Qualifiers™, during which Canadian Supporters helped to paint BMO Field red across three matches in the the fall of 2011, the Canadian soccer community is once again being called on to help make BMO Field a fortress of Canadian support.

As an extension of the engaging campaign developed by official apparel supplier Umbro, the Canadian Soccer Association launched its See Thee Rise promotional campaign at the Toronto FC v Los Angeles Galaxy CONCACAF Champions League quarter-final match at Rogers Centre on 7 March. Different applications of the campaign will be seen throughout the Greater Toronto Area and at community soccer clubs across the region. The campaign is designed to support the aspiration and journey of Canada’s Men’s National Team on the world stage. Canadian Supporters are encouraged to use the hashtag #seetheerise to rally behind Canada during the build-up to the all-important summer matches.