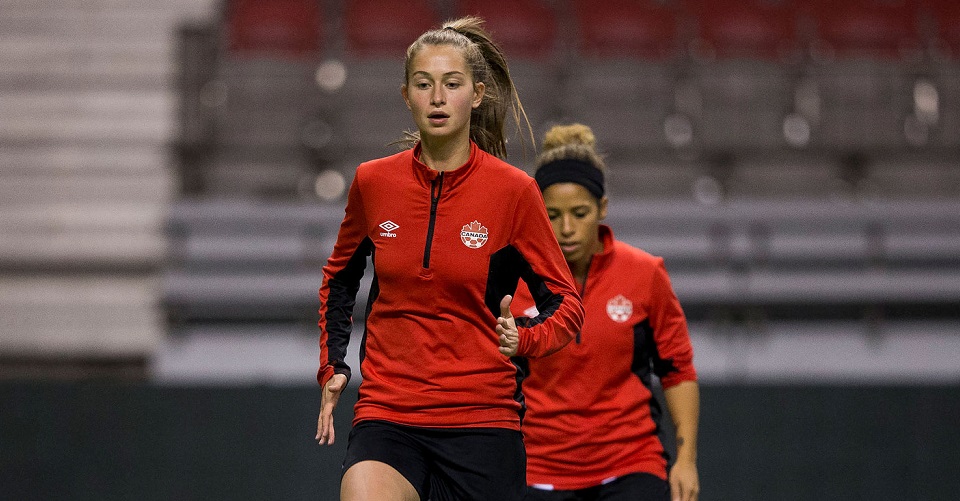 Coming only three days after the heart-thumping 1-1 draw in front of 28,017 at BC Place in Vancouver, Canada Soccer’s Women’s National Team put on another strong performance against USA, despite falling 3-1 in front of 18,960 fans at Avaya Stadium in San Jose, California.
Janine Beckie scored her Canada-best seventh goal of the international season early in the second half while Julie Ertz (first half), Alex Morgan, and Carli Lloyd (second half) countered for the hosts USA.

“We sent a message about our intent to get to number one through our actions in the first match of the series and the goal for this second match was to attain consistency,” said John Herdman, Canada Soccer’s Women’s National Team Head Coach. “These women put in a shift tonight and I can’t say enough how proud of each and every one of them we are. We’ll take away some lessons from tonight and from the match in Vancouver, but I can honestly say we feel pretty good about what we’ve accomplished against this US team and there are no hung heads coming out of this camp.”
Canada started teenagers Jessie Fleming and Deanne Rose then added Jordyn Huitema, Ariel Young, Jayde Riviere, and Julia Grosso in the second half. In Huitema, Young, and Riviere, it marked the first time Canada fielded three 16-year old players against the world’s number one team.
Young, Riviere, and Grosso were all making their international debuts.

GOALS:
Julie Ertz opened the scoring with a header on a Megan Rapinoe corner kick. Ertz connected at the near post to give USA the 1-0 lead.
Christine Sinclair set the play for the equaliser with a ball down the right side. Nichelle Prince on the run beat a pair of Americans to the ball and centered to Janine Beckie at the top of the box for the 1-1 goal. Beckie made no mistake with her right-footed shot to beat Alyssa Naeher.
Alex Morgan gave USA the 2-1 lead from inside the box. Lindsey Horan and Christen Press caused the turnover before Press fired it forward past Rapinoe to the awaiting Morgan.
Carli Lloyd made it 3-1 from inside the six-yard box. This time, it was a Megan Rapinoe cross that was headed by Morgan before Lloyd tapped it in from close range.
Rapinoe nearly made it 4-1, but Stephanie Labbé made a key save to keep the ball out. The ball hit the post, but Labbé was quick to recover and smother the ball.
Canada’s record in 2017 sits at six wins, two draws, and three losses. Canada will close out the 2017 season with an international friendly against 14th ranked Norway in Marbella, Spain on 28 November.