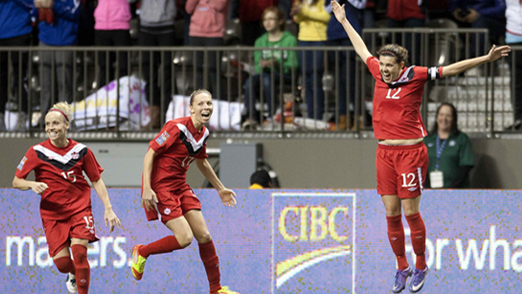 Canada looking to close out CONCACAF Women’s Olympic Qualifying with a win over vials USA.

Having already qualified for London 2012 you could be forgiven for thinking there is little left to play for at CONCACAF Women’s Olympic Qualifying in Vancouver – but for Canada – that couldn’t be farther from the truth.

After dispatching Mexico with a convincing 3:1 win on 27 January the Canadians are now looking to send a message to the footballing world with a strong performance against the world-number-one Americans in Sunday’s tournament final (17.00 local kick-off).

With only a limited number of tickets to the match remaining (ticket details: canadasoccer.com/madeforthis), Canada will enjoy the same fervent home support that helped push the team over the finish line on Friday.

Sunday 29 January’s match at 20.00 ET / 17.00 PT will also be broadcast coast-to-coast on Sportsnet HD (all regions) as well as online at Sportsnet.ca.

Canada have not defeated USA at the senior level (Men’s or Women’s) since 2001, but with the team riding an emotional wave of support from across the country, Sunday may prove to be a perfect opportunity to break the decade-long derby drought.

While the two teams will be hotly contesting the title to determine the number one team in CONCACAF at the moment, there is also an intriguing personal battle unfolding between Christine Sinclair and Abby Wambach.

Sinclair will also be looking to hang on to her lead as the tournament’s leading goal-scorer. The Canadian captain currently leads the scoring race at Canada 2012 with nine goals while USA’s Amy Rodriguez is in second place with six of her own.