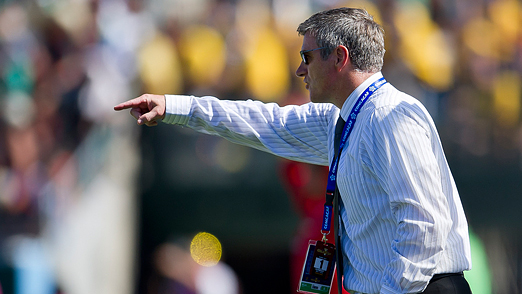 Canada is left with its ‘back against the wall’ at the 2013 CONCACAF Gold Cup – but the team will be looking to answer the call on the final day of group play with a performance that can still see the team through to the knock-out stages of the tournament.

The Canadians will take on Group A leaders Panama on Sunday (13.30 local kick-off) at Sports Authority Field in Denver knowing that a win would play the team right back into contention to advance to the quarter-finals.

Should Canada be able to pick-up three points on Sunday, they will be back in the mix to overtake Mexico or Martinique for third place in the group – and with second-match results from across the tournament in the books – it appears that Colin Miller’s side would have a reasonable shot at advancing in the competition as one of the two highest-ranked third-place finishers in group play.

But before Canada can start to worry about goal differentials, tie-breakers and group rankings – the team knows it needs to win against a high-quality Panamanian side.

To win, Canada will have to find a way to score, and Miller sent out messages of encouragement to his players on Saturday – urging the squad to get forward and play with purpose in its attacking movements.

“We have to be very positive in the final third and take the opportunities when they come.

“We know we can’t pull a rabbit out of a hat but we have to commit more players forward when it’s possible and we need to continue to defend the way we have done so far in the tournament. “

CANMNT: Do or die against Panama at Gold Cup

“Everyone’s aware of the importance of getting a win tomorrow,” said De Guzman.

Echoing the comments from Miller, De Guzman also pointed to the need for Canada to converts its chances in front of goal.

“Most importantly, we just need to become more of a threat going forward.

The renewal of hostilities between Canada and Panama will be the first time the teams have come together since the two nations enjoyed a spirited battle in the third round of FIFA World Cup™ Qualifiers in 2012.

Canada defeated Panama 1:0 at home in Toronto on 7 September, before the Central Americans turned the tables by picking up a 2:0 win in Panama City four days later.

The return contest in Panama proved to be a difficult road trip for the Canadians who were subjected to an all-night street part in front of the team hotel the night before the qualifier.

Panama have already secured passage to the knock-out stages of the Gold Cup with a maximum of six points from its opening two games; Mexico is currently in second place in Group A with three points, leading Martinique, also on three points, by virtue of goal differential. Canada is currently last in the group after having lost its first two matches at the tournament.