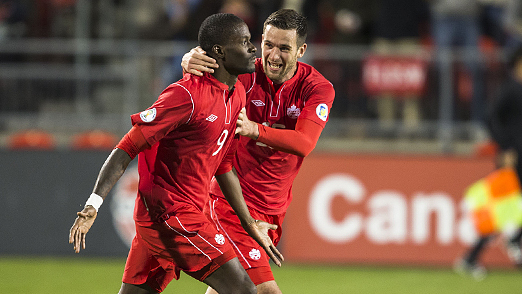 While some Canadian fans and media might already be looking ahead to the team’s high-profile Gold Cup clashes with Mexico and Panama – Canadian Interim Head Coach Colin Miller is insistent that his side are paying full respect to a difficult opening fixture against Martinique.

“Our focus right now is squarely on Martinique,” said Miller.

BROADCAST ALERT: Canada’s opening match at the Gold Cup, against Martinique (local kick-off 14.30 at the Rose Bowl in Pasadena, CA), will be broadcast live in Canada on Sportsnet World and Sportsnet World Online (17.30 ET / 14.30 PT).

Fans will also be able to follow live coverage on Twitter: @CanadaSoccerEN. Full pre and post-match video coverage will be available on CanadaSoccerTV.

With Mexico and Panama being the two highest-ranked sides in Group A, Miller believes that both Canada and Martinique will be approaching Sunday’s tournament-opener with a must-win mindset.

“We imagine that they are looking at us – with our current ranking in the world – and thinking that this is a must-win game for them as well,” said Miller.

“So it’s no secret that both sides see this game as a crucial encounter.”

Tomorrow’s Gold Cup match will be Canada’s first competitive fixture since the team suffered a disappointing end to its Brazil 2014™ qualifying campaign – and the interim coach is demanding that the team puts in a committed performance to set the tone for the program moving forward.

“I have asked the players to ensure, that at a minimum, we are a difficult team to beat and that we are difficult to break down defensively.

“That all starts with the right attitude and commitment.”

Miller is juggling a squad that features a batch of veteran players mixed in with a crop of youngsters, eight of whom are looking to make their first competitive appearances for Canada.

But the Canadian boss is adamant that no young player will simply walk into the team and that any opportunities must be earned.

“We have some good young players in the side but they will have to earn their right to play some minutes in this tournament.

“We are here to compete and win, and that might likely mean that I go with some of the more senior players available to me.”

Following the game against Martinique, Canada will travel to Seattle, WA to take on Mexico on Thursday 11 July; and will then travel to Denver, CO to close-out the group stage against Panama on Sunday 14 July.

The top two teams from each group, as well as the two highest-placed third-place finishers will advance to the knockout-stages.

Attakora did not report into camp due to an ongoing injury concern.

Porter will not immediately travel to meet-up with the Canadian team but has been placed on stand-by in the event that the coaching staff should need to call him into camp.