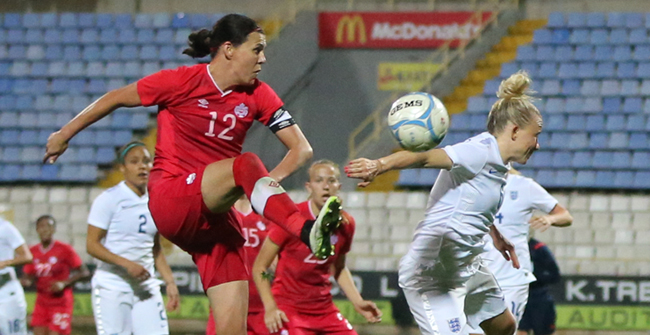 Canada, currently ranked 11th in the world, will compete in Group B of the 2016 CONCACAF Women’s Olympic Qualifying Championship, opening its Olympic qualification campaign against 89th ranked Guyana on 11 February, before taking on 48th ranked Trinidad and Tobago on 14 February, and 76th ranked Guatemala on 16 February. Group A includes #1 ranked USA, Mexico (26th), and Costa Rica (34th) and Puerto Rico (108th).

Looking to top the group and earn a spot on the semi-final match, where Olympic qualification will be decided, Canada’s Head Coach John Herdman will be using the first three matches to prepare for the knockout rounds.

“We are looking to put on a strong performance and come out on top of our group,” Herdman said in advance of the opening match. “We know some of the teams we are facing in the group stage will pose challenges, so our goal is going to be to go out there and play our game.”

Guyana earned its spot at the CONCACAF championship after finishing third at in the Caribbean Football Union tournament behind winner’s Trinidad and Tobago and runner-up Puerto Rico. This is the second appearance for the Guyana women’s team in CONCACAF championships, having previously qualified for the 2010 CONCACAF Women’s Gold Cup.

Canada’s second match against Caribbean powerhouse Trinidad and Tobago on 14 February is expected to be a difficult group stage match. Known as an athletically fit and powerful side, Trinidad and Tobago have proven to be a considerable challenge in the CONCACAF region.

The final group stage match against Guatemala on 17 February will determine in what position Canada comes out of the group round, and potentially what team it will face in the semi-final, where qualification for the Rio Olympics is on the line.

“Each of the teams we are facing in this group can really create some challenges for our front line,” said Herdman. “We expect to see them playing highly defensive games, which can make it difficult for us to break through and get good scoring chances. Trinidad and Tobago is a strong, physical team, and we are expecting they will come out hard against us. Guyana and Guatemala will be looking for a point against us, so it’s really important we get behind their back line and create scoring opportunities.”

Heading into the tournament, Canada has struck a balance with a mix of veteran players and new faces that Coach Herdman believes are up for the task ahead.
“We are really excited about the team we have here,” said Herdman. “There is a great feeling amongst the team coming into this competition – with a mix of veterans, young up and comers, and a solid group of players in the middle. We’ve been together more or less since December and that has given us the opportunity to really bond as a group.”

With a spot at the Rio Olympics on the line, fans can be certain Canada will be working towards a win on 19 February, but Herdman is confident that this squad has the capability, and hunger, to also do the unexpected.

“Winning the semi-final and qualifying for the Olympics is definitely an important goal for us for this competition, but we are not going to give up there,” he said. “Our game plan includes winning all five of our games in this tournament and we think we can do that with the team we have here.”

With the FIFA Women’s World Cup Canada 2015™ having been completed nearly eight months ago, a revamped Canada squad is looking forward to again earning a spot on the podium at the Olympic Games.

“Our goal is going to be to go out and be the best tactically proficient team we can be, and to bring to the pitch many of the elements we have been working on over the past few months as we’ve evolved. We’ve been looking forward to this.” Herdman said.

Sportsnet will carry each of Canada’s knockout round matches on Sportsnet ONE. The Semi-finals will take place on February 19th and, should Canada advance, the Final match on February 21st. Exact broadcast times of any Canadian knock out matches will be determined during the group stage. Sportsnet’s live coverage will include live play by play by on Sportsnet ONE.