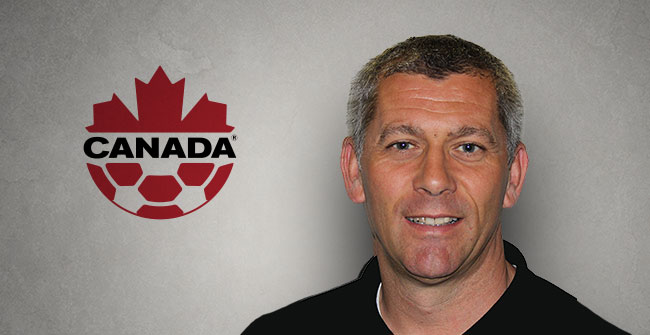 He will also serve under Benito Floro as Assistant Coach with Canada’s Men’s National Team.

Canada Soccer is pleased to announce the hiring of Michael Findlay as National Staff Coach. He will also serve under Benito Floro as Assistant Coach with Canada’s Men’s National Team.

“We are thrilled to see Michael join our full time team as National Staff Coach,” said Peter Montopoli, Canada Soccer General Secretary. “Michael’s experience and wide understanding of the Canadian soccer landscape, from grassroots to National Teams, will be an enormous asset for Canada Soccer as we remain focused on the key priorities identified in our Strategic Plan 2014-2018 Leading a Soccer Nation: technical leadership, National Team performance, and growing and governing the game of soccer in Canada.”

Michael Findlay comes to Canada Soccer having already been heavily involved in Canada’s Youth National Team programs after working with the coaching staff in FIFA U-17 and U-20 World Cup qualifying campaigns (2009 – Mexico; 2011 – Guatemala) and Francophone Games. A former director of the National Training Centre in British Columbia, Findlay brings with him a wealth of knowledge on the Canadian soccer system which will make him a valuable addition to Canada Soccer’s technical staff working on player and coaching development.

“I look forward to providing my overall support as it relates to delivering on Canada Soccer’s new strategic vision of becoming a soccer nation, and its goal to achieve success at all levels of its technical programs,” said Findlay on his new role.

Findlay comes from BC Soccer where, as Senior Staff Coach and Director of Football Development, he was instrumental in establishing technical leadership of the first High Performance Youth League in Canada – the BC Soccer Premier League – and implementing a renewed player pathway and grassroots service plan initiative that dramatically improved the soccer environment for thousands of young BC players.

“Michael has been involved with Canada Soccer’s Youth National Teams for some time now and his full time progression to Canada Soccer as a coach with the Men’s National Team is something we should all be very proud of,” stated Roger Barnes, BC Soccer President. “This demonstrates recognition for the Michael’s expertise, and just as every player dreams of playing for Canada, we are delighted Michael has attained his goal of coaching our national team.”

“I would like to thank President Montagliani, Canada Soccer’s executive management, Head Coach Benito Floro and the technical leadership group for providing me with this opportunity to fulfill my goal of serving Canada and its National Teams,” Findlay added. “It has always been and will continue to be an honour and privilege to step into the technical area as a coach of Canada’s National Teams, and I am eager to continue to provide my expertise, knowledge and support to Head Coach Floro and help deliver international success for our Men’s National Team for years to come.”

Findlay will step into this new role as of 1 October 2014, but will also be part of the technical staff leading the Men’s National Team camp in Toronto, ON ahead of the 9 September match against Jamaica at BMO Field.