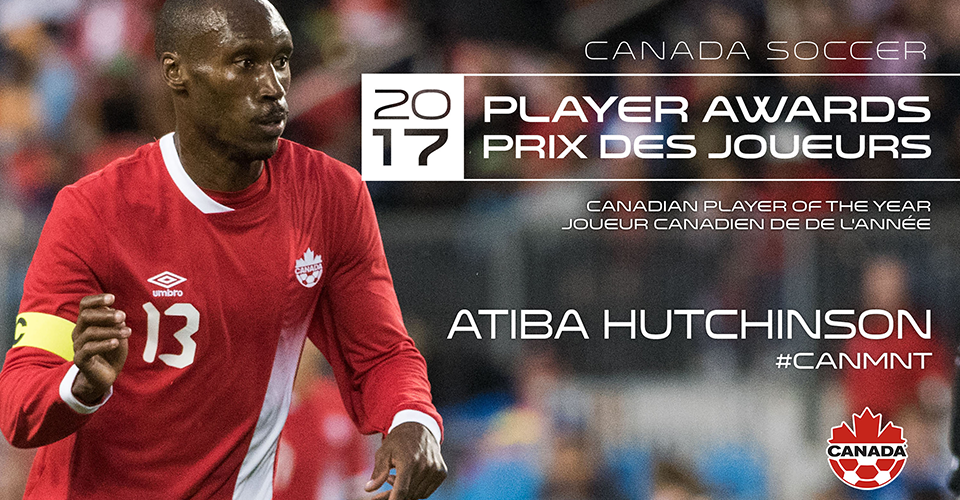 Atiba Hutchinson has been named Canadian Player of the Year from the Men’s National Team for the sixth time in eight years as part of the 2017 Canada Soccer Player Awards. Hutchinson from Brampton, Ontario was honoured from a vote shared by Canadian coaches and media after yet another truly remarkable season by a Canadian athlete on the international stage.

Alongside a second consecutive Turkish Süper Lig title, Hutchinson led Beşiktaş JK to the quarter-finals of UEFA Europa League in the second half of the 2016-17 season and then to a Round of 16 qualification in UEFA Champions League as part of the 2017-18 season. The stalwart midfielder helped Beşiktaş JK win their UEFA Champions League group undefeated with 14 points, a record for a Turkish club in the world’s pre-eminent international club competition.

Hutchinson is one of two winners of the 2017 Canadian Players of the Year award. His co-winner from the Women’s National Team will be announced on Thursday 14 December.

“He is playing at the highest level competing against the best in the world and his stats place him among the best of the best,” said Octavio Zambrano, Head Coach of Canada Soccer’s Men’s National Team. “With Canada against Jamaica, you could just tell that his presence alone both on and off the field made a huge impact with the Men’s National Team. He is at the top of the game and he is more than worthy of winning this award for the 2017 season.”

In the back half of the 2016-17 season, he made 14 league appearances as Beşiktaş won back-to-back titles for the first time in more than 25 years. He also made five appearances in UEFA Europa League as the team reached the quarter-finals, with Hutchinson wearing the captain’s armband in a 1:1 away draw against Olympiacos. Over the course of the full 2016-17 season, he led the Turkish league with 96.4 passing accuracy.

In the first four months of the 2017-18 season, Hutchinson has already made 15 appearances in domestic league and cup competitions, with Beşiktaş just five points back of first place with still five months to play. In UEFA Champions League, he is among the top-20 players in passing accuracy (minimum 200 passes) with 94.5% through five matches. In helping Beşiktaş win the group and qualify for the competition’s knockout phase, he is just the third Canadian player to reach the Round of 16 (following in the footsteps of Tomasz Radzinski and Paul Stalteri). Hutchinson also wore the captain’s armband for two matches in the group phase, an away 2:1 win over Monaco and a home 1:1 draw with FC Porto.

After Canada reached the quarter-finals at the 2017 CONCACAF Gold Cup, Hutchinson returned to the Men’s National Team in September as he made his 78th international “A” appearance to move into fifth place on the all-time list (tied with Mark Watson). He was a leader in camp and an engine on the pitch as Canada won 2:0 over Gold Cup finalists Jamaica at BMO Field in Toronto, with Hutchinson wearing the captain’s armband for the sixth time in his career.