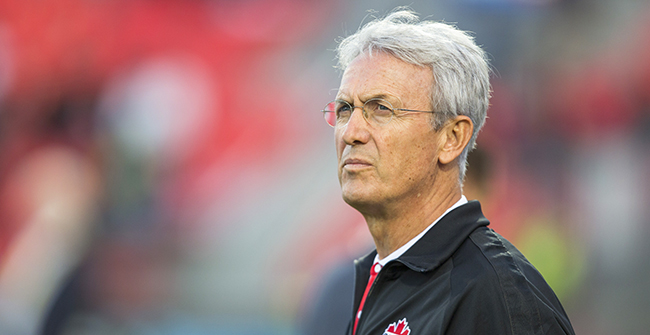 The announcement comes at the end of Canada’s 2015-16 cycle of 2018 FIFA World Cup Russia Qualifiers.

Canada Soccer has announced that it has exercised its option to not renew the contract with Men’s National Team Head Coach Benito Floro. The announcement comes at the end of Canada’s 2015-16 cycle of 2018 FIFA World Cup Russia Qualifiers in which Canada came within a point of reaching the CONCACAF Hex.

Over 10 matches from 11 June 2015 to 6 September 2016, Canada posted five wins, two draws, and three losses. In the CONCACAF semi final round, Canada were eliminated after finishing third in Group A with seven points (2W-1D-3L), finishing behind Mexico (16 points from 5W-1D-0L) and Honduras (eight points from 2W-2D-2L) and ahead of El Salvador (two points from 0W-2D-4L).

Along with Canada Soccer’s Men’s National Team, Floro was also Head Coach for Canada at the CONCACAF Men’s Olympic Qualifying Tournament, bringing his squad to just one win away from qualifying for the Rio 2016 Olympic Games.

“We would like to thank Benito Floro for his professionalism and integrity during his tenure as Head Coach,” said Victor Montagliani, Canada Soccer President. “Moving forward, we will build on our momentum and continue to focus the organisation’s resources on maximizing the team’s performance.”

Head Coach Benito Floro managed 30 international “A” matches for Canada from 2013 to 2016, posting nine wins, 10 draws, and 11 losses. He helped build a strong defensive foundation, in fact leading Canada to both their lowest goals against average (0.43) and longest shutout streak (564 minutes) in program history in 2015.

At home under Floro, Canada posted five wins, one draw and one loss in seven matches. His last match at the helm was a 3:1 victory at BC Place on 6 September 2016.

#CanadaRED support was strong throughout FIFA World Cup Qualifiers with 115,793 cumulative spectators at five home matches, of which there were 95,632 fans at three semi-final matches in Vancouver. With 54,798 fans at the 25 March FIFA World Cup Qualifiers match against Mexico at BC Place, Canada set the record for the largest in-stadia attendance for a national team event – of any sport – ever played in Canada.