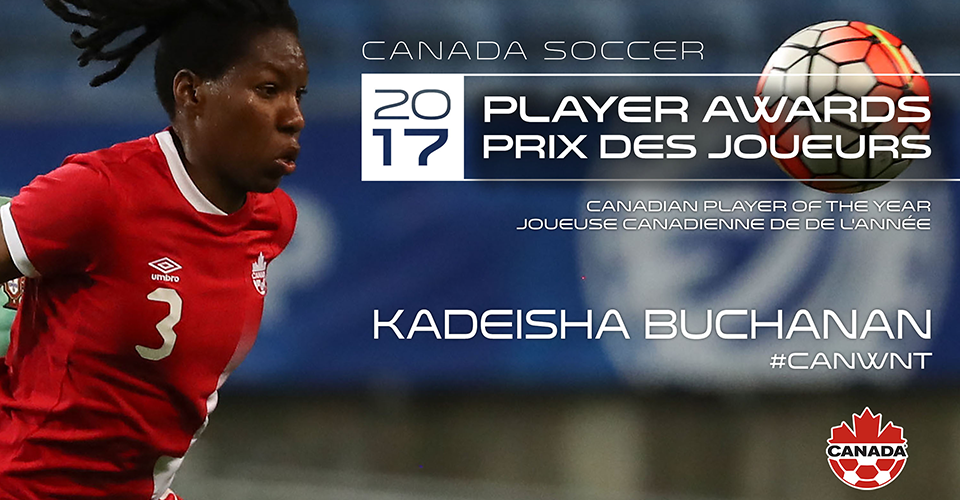 Kadeisha Buchanan of the Women’s National Team has been named Canadian Player of the Year for the second time in three years as part of the 25th edition of the Canada Soccer Player Awards. Buchanan from Brampton, Ontario was honoured from a vote shared by Canadian coaches and media as she continues her rise as one of the game’s most dominant centre backs in the world.

Buchanan was a star with both Canada and French club FCF Olympique Lyonnais, notably kicking off her professional club career by winning a treble of trophies as League winners (Championnat de France), Cup winners (Coupe de France), and UEFA Champions League winners from the 2016-17 season. Buchanan, named to the tournament’s Squad of the Season, is the first Canadian to win a UEFA Champions League title.

Buchanan is one of two winners of the 2017 Canadian Players of the Year award. Her co-winner from the Men’s National Team is Atiba Hutchinson, also from Brampton, Ontario.

“It has been an amazing year for Kadeisha with the club treble as she has achieved in her first year in France what many players wait a lifetime to achieve,” said John Herdman, Head Coach of Canada Soccer’s Women’s National Team. “She also was a key player for Canada in two home matches against Costa Rica in which she played very well in June and then again in November as Canada beat Norway for the first time. It was just another great year for Kadeisha.”

Straight out of West Virginia University having won the M.A.C. Hermann Trophy as the best college player in the NCAA for the 2016 season, Buchanan made an immediate impact as a rookie pro in France. She made 12 domestic appearances and five in UEFA Women’s Champions League, helping Olympique Lyonnais win their 11th straight Championnat de France, their sixth straight Coupe de France, and second-straight UEFA Champions League title. In the European final, Olympique Lyonnais and Paris St-Germain (featuring Canadian Ashley Lawrence) played to a 1:1 draw before Olympique Lyonnais won 7-6 on kicks to capture the title.

Already in 2017-18, Buchanan has made eight appearances in the French league and four more in UEFA Women’s Champions League. Buchanan and her teammates are already through to the Quarter-finals, with FC Barcelona their opponents when the continental competition resumes in March 2018.

At the international level, Buchanan made nine appearances for Canada, seven of which were wins including the come-from-behind 3:2 victory over Norway at the end of November. She also helped Canada finish second at the Algarve Women’s Cup, defeat Sweden away in April, and beat Costa Rica twice at home in Winnipeg and Toronto.