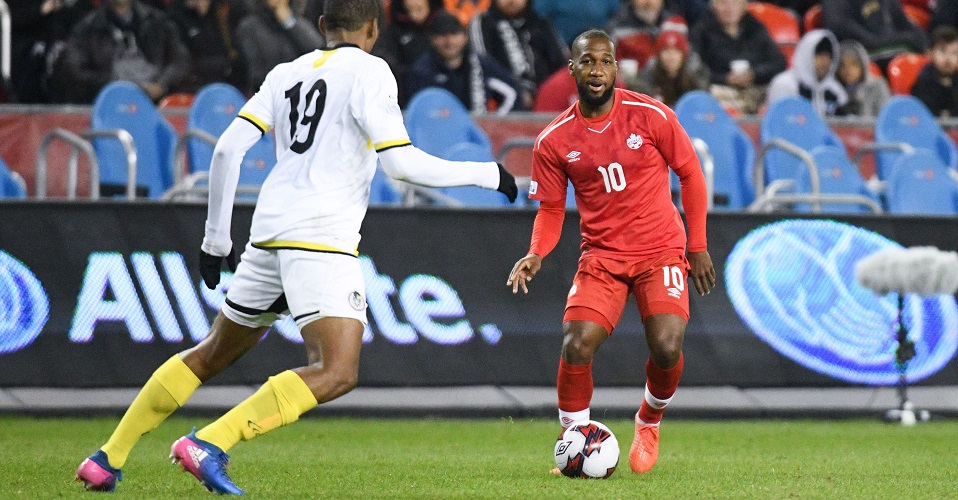 Canada are heading into their opposition’s den with an opportunity to cement their place in 2018-19 Concacaf Nations League Qualifying. The November away match is expected […]

Canada are heading into their opposition’s den with an opportunity to cement their place in 2018-19 Concacaf Nations League Qualifying. The November away match is expected to provide Canada with new sets of challenges at the home of Caribbean rivals St. Kitts and Nevis, but the Canadian squad will come prepared as they continue to raise their bar on the road to the 2022 FIFA World Cup Qatar™.

Talent, experience, and youth are the highlights of the Canada squad, which have won the first two of four matches in 2018-19 Concacaf Nations League Qualifying. While Canada sits third out of 34 nations with two wins and 13 goals scored, they head into St. Kitts and Nevis searching for their first-ever goal in official competition at Warner Park Football Field in Basseterre.

“We are really looking forward to this challenge as St. Kitts and Nevis have performed well in Concacaf Nations League thus far,” said John Herdman, Canada Soccer’s Men’s National Team Head Coach. “Given our history in this venue, we know it is a tough place to get a result, but we are clear on our approach and the players will be ready.”

Canadian fans can watch the 18 November away match live on Concacafgo.com at 19.00 ET / 16.00 PT (20.00 local). Fans can also follow the team across Canada Soccer’s digital channels on Facebook, Instagram and Twitter, including behind-the-scenes coverage throughout their one-week camp abroad.

“It’s a big game for sure and we will have a few things to manage in St. Kitts and Nevis from heat to pitches to jet lag, but nothing that this group can’t handle,” said Herdman. “It’s actually that to which we are looking forward: a good test of our team spirit. This game will create some valuable learnings for the team as a whole as many of our players haven’t ventured this deep into the Caribbean for games. We need these uncomfortable experiences now to ensure we have a level of readiness for even tougher matches that we will encounter in the coming years.”

Borjan’s goalkeeper partners for this match are Simon Thomas of Kongsvinger IL (Norway) and Maxime Crépeau of Ottawa Fury FC. Centre back David Edgar (also with Ottawa in 2018) is the lone returning player from Canada’s last trip to St. Kitts & Nevis in 2011 while 28-year old midfielder David Wotherspoon of St. Johnstone FC (Scotland) is in his first year with Canada.

Unavailable through injury is Jonathan Osorio, who recently underwent a successful sports hernia repair after the MLS season. Scott Arfield remains in Scotland in anticipation of the birth of his family’s next child.

Canada’s other teenagers with big European clubs are Zachary Brault-Guillard of Olympique Lyonnais, Liam Millar of Liverpool, and Ballou Tabla of FC Barcelona. While Davies made his international debut in 2017, the other four have all made their debuts in 2018. Along with Alessandro Busti (currently away at the Concacaf Men’s Under-20 Championship), this marks the first time since 1984 that Canada has debuted five teenagers at the international “A” level in the same calendar year.

Other youngsters still 21 or younger are Derek Cornelius of FK Javor Ivanjica (Serbia), Liam Fraser of Toronto FC, and Marcus Godinho of Heart of Midlothian (Scotland). Shamit Shome of Impact de Montréal will also make the trip to St. Kitts & Nevis as a training player to ensure more top youth players are gaining experience in the Men’s National Team environment. From the official squad, Fraser is the only player yet to make his international debut.

CONCACAF NATIONS LEAGUE QUALIFYING
Amongst 34 qualifying nations, Canada are in third place on goal difference after an away 8:0 win over US Virgin Islands and a home 5:0 win over Dominica. The qualifying campaign runs through March 2019, after which the top nations will be ranked on points (three points for a win, one point for a draw), goal difference, goals scored, away goals, and then fewest yellow/red cards accumulated.

The 18 November match against St. Kitts and Nevis will be just the third all-time meeting between the two nations, with Canada having won a 2011 home match 4:0, but drawn 0:0 away at Warner Park in FIFA World Cup™ Qualifiers. In 2018-19 Concacaf Nations League Qualifying, St. Kitts and Nevis won their home match 1:0 over Puerto Rico in September and then their away match 10:0 over Saint Martin in October.

In their last nine home matches at Warner Park since 2016, St. Kitts & Nevis have posted a record of six wins, one draw, and two losses while posting five clean sheets.

The 18 November match will close out Canada’s 2018 season with a chance to go perfect 4-0-0 for the first time in Men’s National Team program history.