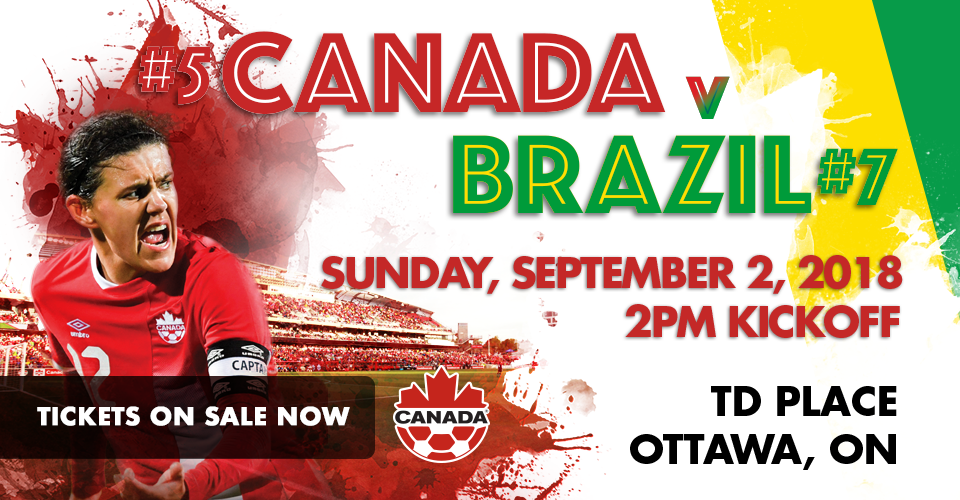 Canada Soccer has released its Women’s National Team roster for the upcoming Women’s International Friendly match against Brazil. Canada’s squad will face Brazil in Ottawa on […]

Ahead of Canada’s FIFA Women’s World Cup France 2019™ qualification campaign set for October at the 2018 CONCACAF Women’s Championships, Canada will be using the opportunity to play the 2016 Rio Olympic hosts to assess the squad make-up and to see how individuals perform under the unique pressures of playing such a high-calibre team.  Both Canada and Brazil have recently been ranked amongst the top-10 nations in the world, with Canada ranked fifth and Brazil ranked seventh.

“Every player will be asked to perform,” said Kenneth Heiner-Møller, Canada Soccer’s Women’s National Team Head Coach. “We performed against Germany in June, but didn’t win. We are coming to Ottawa with the goal of winning this match for our fans, but also to give our team a confidence boost ahead of the 2018 Concacaf Women’s Championship. There will be a lot of assessment, so the players will need to prove themselves, but that is what players expect coming into this kind of match.

“Additionally, we’ve brought in three U-17 aged players from our EXCEL program and we are very excited that we continue to see excellent players being developed. Some of these players are the future, but they can also be players that make an impact right now. Seeing how they play against an opponent like Brazil and how they adapt to the team culture is going to be important towards understanding the make-up of this team for the rest of 2018 and into 2019.”

Canada defeated Brazil at the Rio 2016 Olympic Games to take the Olympic Bronze Medal. Canada’s back-to-back podium finishes at the London 2012 and Rio 2016 Olympic Games earned them the distinction of becoming the first Canadian team to win back-to-back Summer Olympic medals since 1908. They were also the first-ever women’s Canadian team to repeat on the podium. Canada also faced Brazil in Toronto and Ottawa ahead of the Rio Olympics, splitting the series, including Canada’s send-off final match in Ottawa which saw the home team defeat Brazil 1-0, with Janine Beckie scoring in the 90th minute to secure the win in front of 23,588 fans at TD Place.

“As always, we are expecting a very tight match against Brazil,” said Heiner-Møller. “We’ve played them quite a lot over the past few years and we have won the most important ones, including the Bronze Medal match at the Rio Olympics, but it is always a tough match. What we expect to see from Brazil in Ottawa, and what will help us moving towards the qualification matches in October, is their extremely talented attacking forward line. Playing this level of attacking ability is going to give us the opportunity to test how we handle that, how we manage them one on one, and how our on-field units come together to manage world-class strikers. This will be especially helpful going into the Concacaf Women’s Championship as we can expect to see teams with highly-talented individual players from both the international powerhouses and emerging nations in our confederation.”

Fans who are unable to attend can watch the Women’s International Friendly match between Canada and Brazil on TSN5 across Canada.

Group Ticket Discount Offer
Group discounts (10+ tickets) are available for this match, by organizing a group of 10 or more, fans are eligible to receive a discount of up to 30% off regular priced tickets. To submit a group ticket request, complete the group order form indicating the price point and quantity of tickets you are wishing to purchase here: Group Order Form. Ticket orders will be processed on a first come, first serve basis so organize your group, club, or team today.

‘Me+3’ Offer
A special ‘Me+3’ ticket offer is available for this match. By purchasing three tickets in Price Category 3, fans will receive the fourth one free. The ‘Me+3’ ticket packages can be purchased directly via TDPlace.ca.

Canadian Supporters
Canadian Supporter Groups will be allocated dedicated seating in the Southwest corner of TD Place in section W. Information about the Canadian supporter sections is available via the Voyageurs website www.thevoyageurs.org. Please note that persistent standing will be permitted in these sections.

Canada are two-time Olympic bronze medal winners (2012 and 2016) and two-time CONCACAF champions (1998 and 2010). In all, Canada have participated in six consecutive editions of the FIFA Women’s World Cup (1995 to 2015) and three consecutive editions of the Women’s Olympic Football Tournament (2008 to 2016). At Rio 2016, Canada Soccer’s Women’s National Team were the first Canadian Olympic team to win back-to-back medals at a summer Olympic Games in more than a century.