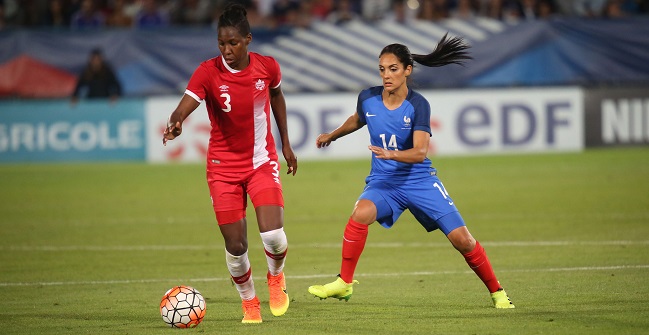 Canada Soccer have announced their squad for an important Women’s International Friendly match against the FIFA Women’s World Cup™ 2019 hosts France. The match pits the […]

Canada Soccer have announced their squad for an important Women’s International Friendly match against the FIFA Women’s World Cup™ 2019 hosts France. The match pits the world’s fourth-ranked Canada against fifth-ranked France at Roazhan Park on 9 April, one of the nine venues for next year’s FIFA Women’s World Cup France 2019™.

As Canada prepares for this October’s qualification phase to the FIFA Women’s World Cup France 2019™, they are using each match of 2018 to prepare for both the Concacaf Women’s Championship and next year’s FIFA Women’s World Cup™. The recent Algarve Cup gave Canada an opportunity to practice str­ategies around tight turnarounds that are the hallmark of major competitions. The France match as well as the upcoming home match against third-ranked Germany on 10 June in Hamilton will test Canada against some of the best nations in the world. The matches will help coaching staff to assess Canada’s current form and provide critical insight into what is needed heading into the upcoming major events.

“France is definitely on their way up with some young players well engrained into the team and strong veteran players, so they are planning for the FIFA Women’s World Cup they will be hosting next year and they are in good shape,” said Kenneth Heiner-Møller, Head Coach of Canada Soccer’s Women’s National Team. “We feel this will be a very equal match and we are looking forward to getting to France and having a number of days to prepare for it.”

Canada’s 18-player roster for the France friendly represents a bulk of the core of Canada Soccer’s Women’s National Team and is reduced from the 23-player roster that attended the Algarve Cup tournament in March.

“All the players we are bringing to France performed very well in Portugal, so again we are bringing in four teenagers in Deanne Rose, Jessie Fleming, Jordyn Huitema and Julia Grosso,” said Heiner-Møller.  “It’s been very uplifting to see how the young players in our EXCEL Program have been able to integrate themselves in this squad, especially from a structural perspective.  Young players coming in can now step into a position on the Women’s National Team because the positions are managed the same way through our youth program.  The benefit of having that system in place is made obvious when you look at how well players like Huitema and Grosso have transitioned into the Women’s National Team.”

After Canada’s match against France, it will then play Germany, ranked third  in the FIFA Women’s World Rankings, at home in Hamilton, ON, on 10 June. Canada, the two-time Olympic Bronze Medal winners will welcome the reigning Olympic Champions to Tim Hortons Field for the Sunday afternoon match (14.00 ET / 11.00 PT).

Based on the recent FIFA Women’s World Rankings and projected from November 2017 to November 2018, Canada Soccer’s Women’s National Team will have played four of the world’s top 10 teams in a 12-month period (USA #1, Germany #3, France #5, Sweden#9).

Beyond Canada’s home match in Hamilton this June, Canada are ultimately preparing for this year’s qualification phase to the FIFA Women’s World Cup France 2019™. Canada will compete in the 2018 CONCACAF Women’s Championship scheduled for 4 to 17 October in the United States.  From the competition, the top-three nations will all qualify for France 2019 while the fourth-place nation will advance to an intercontinental playoff against the third-place nation from South America.
Fans can follow Canada’s journey on the road to the FIFA Women’s World Cup France 2019™ across Canada Soccer’s digital channels including CanadaSoccer.com, Facebook, Twitter, and Instagram.
Canada Soccer Women’s National Team Roster v France
Head Coach Kenneth Heiner-Møller

Tickets for Canada vs Germany in Hamilton
Individual tickets to the Canada v Germany match will go on sale to the public on International Women’s Day, Thursday 8 March, via Ticketmaster.ca. The launch of ticket sales will be preceded by a 48-hour pre-sale for Canada Soccer Insiders. Tickets to the match start as low $20 (plus applicable fees) and fans will once again be able to take advantage of a ‘Me+3’ offer in select sections.