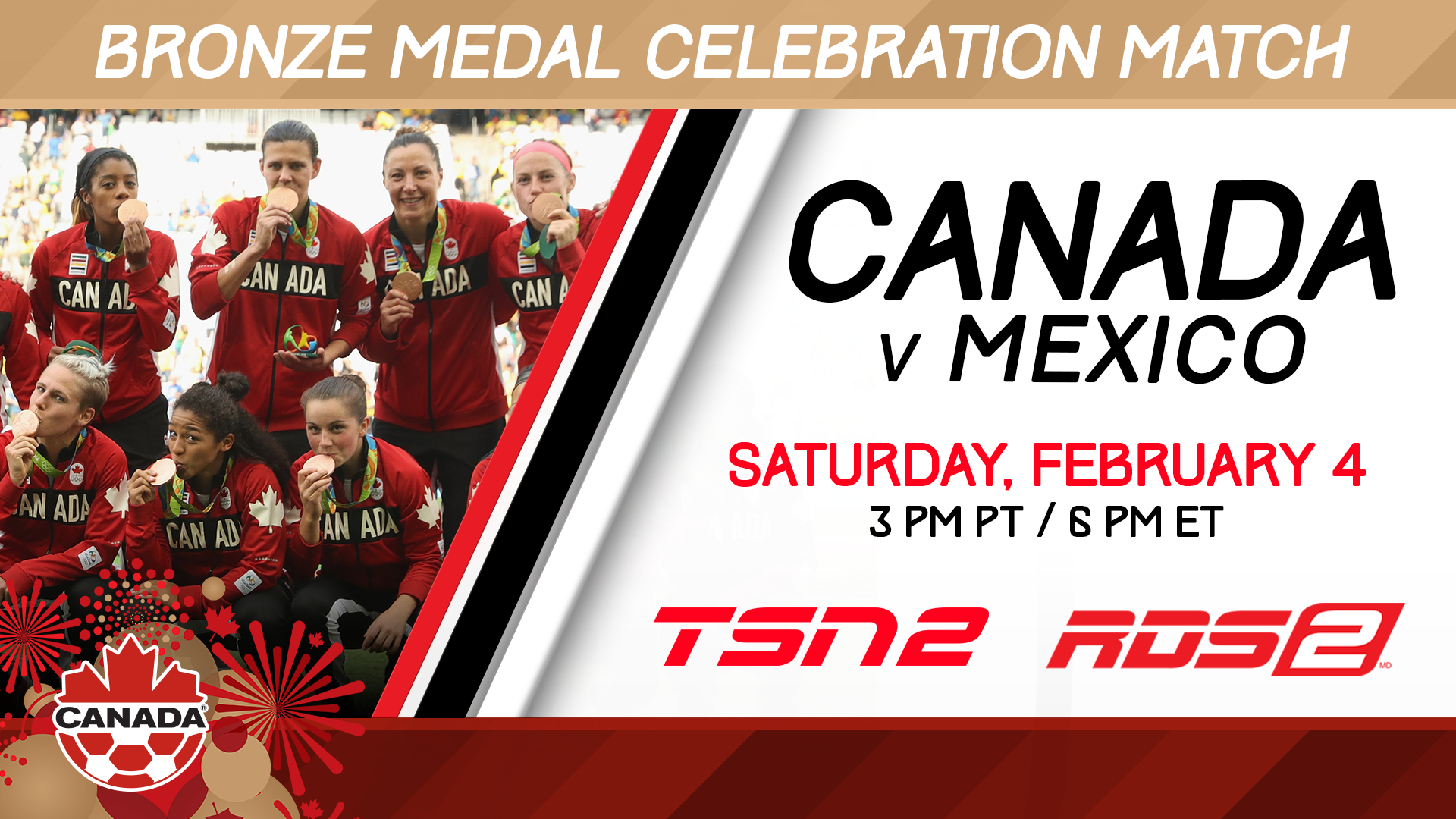 Canadian soccer fans from coast to coast can relive the excitement of Rio 2016 when Canada hosts Mexico in the Bronze Medal Celebration Match on 4 Feb. The live broadcast of the match from BC Place in Vancouver airs on TSN2 and RDS2 at 15:00 PT/ 18:00 ET.
“We are pleased to be once again partnering with TSN and RDS to bring soccer into the homes of Canadians as we celebrate the historic achievements of our Women’s National Team,” said Peter Montopoli, Canada Soccer General Secretary. “We expect to have a lively audience at BC Place, with over 19,000 tickets already sold, and we are thrilled Canadians across the country will be able to join us in honouring these players, especially those who will be representing Canada for their final time on February 4th.”
The match, which will be the first time Canada Soccer’s Women’s National Team will play at home since capturing its historic back-to-back bronze medal at the 2016 Rio Olympics, will feature retiring players Melissa Tancredi, Rhian Wilkinson, and Marie-Eve Nault in their final home match for Canada.
“Canada Soccer’s Women’s National Team captivates the country every time they take the field, and we’re proud to showcase this tribute to Canada’s historic, back-to-back bronze medal-winning group,” said Shawn Redmond, Vice-President of Programming, TSN. “We’re excited to deliver the BRONZE MEDAL CELEBRATION GAME and provide Canadians the opportunity to cheer on this trio of stars donning the red and white for a final time.”
For Head Coach John Herdman, the match will represent both the celebration of the Rio 2016 bronze medal, but also one last opportunity to coach three players who have had a large impact on both the 2012 and 2016 Bronze Medal Olympic teams.
“This is an incredibly important match for us because we are celebrating a massive achievement, but also saying goodbye to players who have truly made their mark not only on soccer, but also on Canada,” Head Coach John Herdman said. “There was an option for the three retiring players to walk on the field at half time and do the traditional farewell wave, but they’ve chosen to step on the field and play. They genuinely want to end this the way it started, playing for their country. Tancredi, Wilkinson and Nault will all play, hopefully together, and when they enter or exit the pitch I am sure the fans will show them how they feel about them. To be able to say goodbye to these players, in front of our fans at BC Place and in the homes of Canadians through the TSN broadcast, it’s going to be very special.”

Great seats for the Canada v Mexico match are still available via Ticketmaster.ca. Tickets to the match start as low as $20 (plus applicable fees) and fans will once again be able to take advantage of a ‘Me+3’ offer in select sections. Groups of 10 or more are eligible for discounts of up to 30% off regular price tickets. Fans interested in group tickets must submit their order at Canadasoccer.com by Wednesday, 1 Feb.