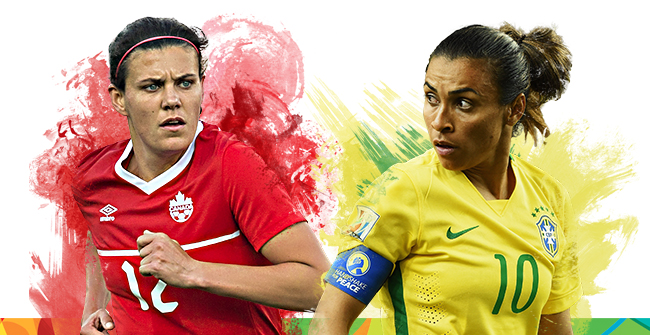 The home matches were announced as part of International Women’s Day celebrations at a media conference in Ottawa, hosted by Ottawa’s Mayor Jim Watson, and attended by Canada’s Minister of Sport and Persons with Disabilities, Carla Qualtrough, and Canada Soccer General Secretary, Peter Montopoli.

“We are really excited to be playing at home again,” said Canada’s Captain Christine Sinclair via a video message from Portugal, where the team is playing in the Algarve Cup. “We’ve always received so much love from Canadian fans, and we are just really happy to be able to come home and play in front of a Canadian crowd once again.”

“Playing Brazil at home will be great,” said defender Kadeisha Buchanan via video. “They are a very good team, so these will be tough games, but with home field advantage and all of our fans there, I think we can put on a really good performance and win them. Playing in Toronto, because it’s my home town, it means a lot and I am really excited to play in front of my family and friends.”

“On International Women’s Day, let’s celebrate this incredible group of female athletes. They are relentless in their push for the podium while, at the same time, they are very aware of the legacy of excellence they are creating for the young girls who will follow in their footsteps,” said the Honourable Carla Qualtrough, Minister of Sport and Persons with Disabilities. “I am a very proud member of Team Canada – 35 million people strong – supporting our athletes every day. We will all be cheering for you in Toronto and Ottawa on the Road to Rio.”

Home Matches
Ottawa, an Official Host City for the FIFA Women’s World Cup Canada 2015™, hosted nine matches including the USA v China quarterfinal, but did not host a Canada match. The June 7th match in Ottawa will be the first Women’s National Team appearance in Canada’s capital since 2003, when Canada beat Brazil 2:1 in front of 18,000 at the then Frank Clair Stadium.

“The City of Ottawa is thrilled to be hosting this exciting soccer match between Canada’s Women’s National Team and Brazil’s Women’s National Team,” said Ottawa Mayor Jim Watson. “Our city was proud to be one of the host cities of the successful FIFA Women’s World Cup Canada 2015™, and we look forward to hosting Canada as they prepare for the 2016 Olympic Games.”

Toronto last hosted Canada’s Women’s National team in 2013 against the USA before a sold out crowd at BMO Field. Toronto hosted one Women’s National Team match against Brazil, back in 2008, which resulted in a one-all draw.

“Hosting Brazil in the lead up to the Rio Olympics gives us a great opportunity to prepare for the tournament against a very challenging team,” said Peter Montopoli. “Canada Soccer has been working hard to ensure we have a competitive program for our team in the lead up to the Olympics so they can go there and defend our bronze medal. Securing Brazil for these two home matches in Toronto and Ottawa in June, is really a best case scenario as we get to take the Road to Rio through Canada with the Olympic hosts.”

Ticket Information
Tickets will go on sale for both Canada Soccer Road to Rio home matches on Tuesday, 22 March at 10:00 ET. Fans wishing to receive access to a special presale window can do so by subscribing to Canada Soccer’s newsletter at: https://www.canadasoccer.com/subscription.php?act=subscribe.
In an effort to ensure that the match is accessible to all fans, groups of 10 or more are eligible for group discounts of up to 30%. Group ticket requests are now being accepted and are processed on a first come, first served basis. To submit a group order, simple complete the group order form indicating the price point and quantity of tickets via the group order form at www.canadasoccer.com/tickets. Designated Canadian supporter sections will be established in both venues. Complete ticketing information is available at www.canadasoccer.com/tickets.