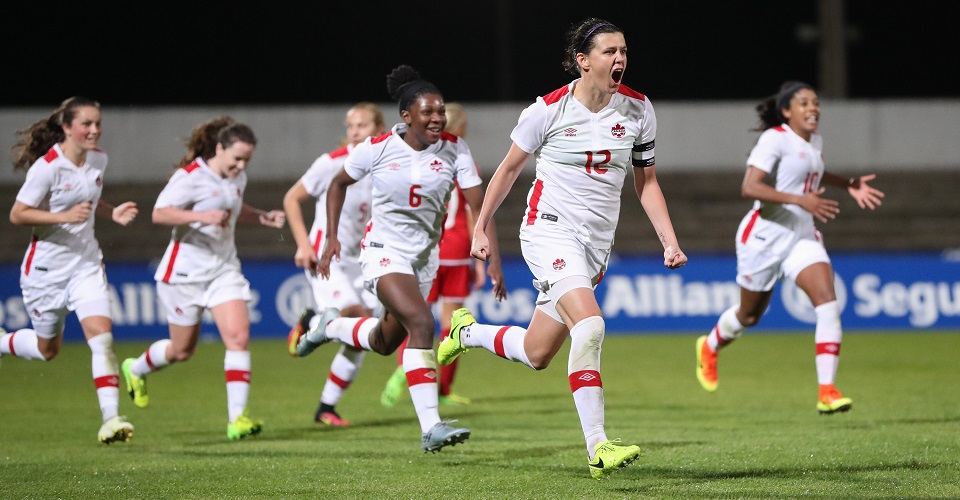 Canada Soccer’s Women’s National Team defeated Denmark 1-0 in at the Estádio Municipal de Lagos in Lagos, Portugal in its first match of the 2017 Algarve Cup. After dominating most of the match, Canada’s Captain Christine Sinclair scored in the 90th minute to secure the win.

MATCH REPORT: CANADA 1:0 DENMARK
Starting seasoned Olympic veterans, Canada looked ready to fight for a victory as it lined up for kick-off. With the powerhouse front line of Sinclair, Beckie and Rose, who between them scored seven goals at the 2016 Rio Olympic Games, fans were left with little doubt Canada came to play. While it took some time to finally net a goal, Canada’s performance showed they have come to Portugal to defend their championship title.

“Denmark started strong for the first ten minutes, but we weathered the storm and found our rhythm,” said Head Coach John Herdman after the match. “It’s like our team just picked up where we left off in Rio, and it was great to see those relationships, that were forming last year, come alive.”

Canada held possession for much of the match, peppering the Denmark goalkeeper late in the first half, and throughout the second. When Canada finally found the back of the net, it came off a Lawrence cross, headed in front of the net by Rose to Sinclair who took a light control touch with her thigh and then made no mistake driving it into the back corner.

“We were knocking on the door for a long time and I felt it was going to come, but we just had to stick with it and there she was, Sinclair again. There was some great build up work and then Sinclair was right on the money,” added Herdman.

Defenders Ashley Lawrence and Kadeisha Buchanan made their return to Canada Soccer’s Women’s National Team for the first time since Rio, having missed Canada’s Bronze Medal Celebration match against Mexico due to commitments with their professional teams in France.

“It’s definitely great to be back with my sisters. It’s been a while and I was excited to get that win tonight,” said Buchanan. “I was getting pretty emotional during the anthem because it was bringing me back to the Olympics, and the team chemistry that we have, so it was pretty emotional just to be back in the environment. It was great.”

Canada will have only one day before its match against Russia, but work has already been done to prepare.

“We’ve done some scouting, so we know they are a very physical team and very direct, so for Canada it’s about denying the penetration in behind and keeping our team tight,” said Buchanan about Canada’s next opponent, Russia.

For Herdman, however, Canada is back in shape and ready to push for a repeat Algarve Cup win.

“We’ve got a tough match against Russia coming up, but this was a great start. The teams back! The team’s back to where I wanted them to be and I think they’ll be happy with this result,” said Herdman. “It was a good performance. We wanted three points, and now we’ve taken control of the tournament again.”