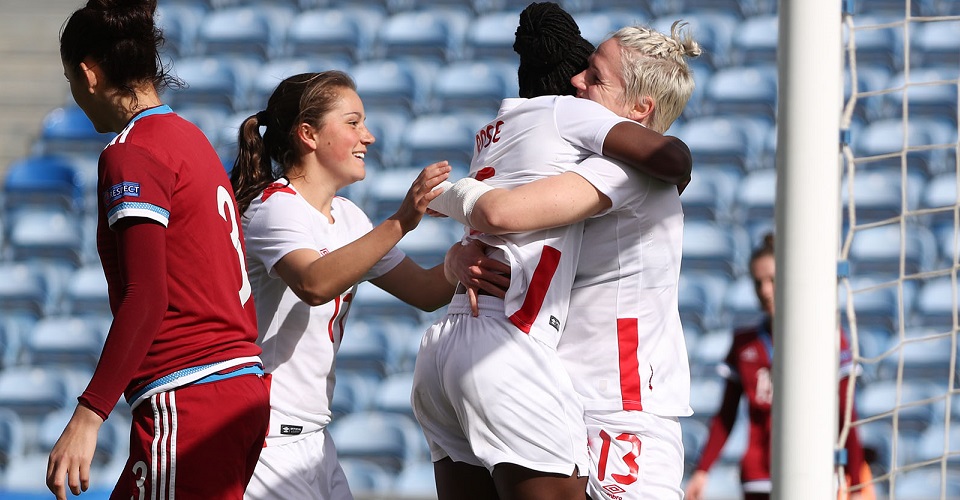 Canada Soccer’s Women’s National Team won its second Algarve Cup group stage match 2-1 against Russia at the São João da Venda, Algarve. Canada took an early lead when Sophie Schmidt put away a loose ball in front of the net in the tenth minute. Canada went up by two in the 26th minute, when Christine Sinclair intercepted a Russian pass, rotated to the centre and slid the ball deep into the back corner. Russia scored on a set play from just outside Canada’s box in the 58th minute.

MATCH CENTER: CANADA 2:1 RUSSIA
“It was a good, solid performance from the girls today,” said Head Coach John Herdman. “They had a really dominant first half, but the challenge is to put those teams away in the first half, when you have that sort of possession and that sort of dominance.”
Canada spent much of the match controlling the ball, working it around the back line and midfield, looking for opportunities to strike through Russia’s solid defense. Fullbacks Lawrence and Levasseur worked the lines well, putting several well placed crosses in front of the Russian net, but more goals wouldn’t come, despite a close call by Buchanan in the final minutes of the match.
“We just need to work on that killer instinct. If you are up at half by three (goals) the game is over, but if you leave it at two-nil it’s always a bit of a shaky one, as we saw today when Russia pulled one back,” said Herdman. “We knew they were dangerous on set pieces and that was what hurt us today, and they caused us a few little problems in transition, but nothing to worry about for Canada. I think it was a solid performance.”
Canada rotated some players into it’s starting XI, including keeper Kailen Sheridan, midfielder Rebecca Quinn and fullback Marie Levasseur, meanwhile substitute Alex Lamontagne made her first appearance for Canada Soccer’s Women’s National Team. Gabrielle Carle came in for Sophie Schmidt in the 78th minute after a collision with a Russian player caused an injury to the side of her face, forcing Schmidt off the pitch.
Canada’s next match is against Algarve Cup hosts Portugal on 6 March at Estadio Algarve.
“Portugal are playing at home, so this is like a cup final for them and I expect them to really come out and see if they can score early,” said Herdman. “We need to get the balance right. We can’t take Portugal lightly because all of these teams in Europe have got threats. Portugal has a great player in Nieto in the centre midfield that we’ll have to take care of, so this will be a tough match.”
The team looks in good shape to make a push for the final and earn the opportunity to fight for a repeat of its 2016 Algarve Cup Championship. Only the top two teams of the three groups go through to the Algarve final, so Canada still has to win its final group stage match to guarantee a spot in the Championship.
“We earned our six points and we go into this next match in complete control, hopefully top of our group, but we have to win our group and that is what we are setting out to do,” said Herdman. “It will be a balance. We have to win this next match, but we also have to be ready for a really tough final match if we get there.”
The 2017 XXIV Algarve Women’s Cup features 12 nations broken out into three groups, with Canada facing Denmark, Portugal and Russia in Group 1. Group 2 consists of Iceland, Japan, Norway and Spain; while Group 3 consists of Australia, China PR, Netherlands and Sweden.