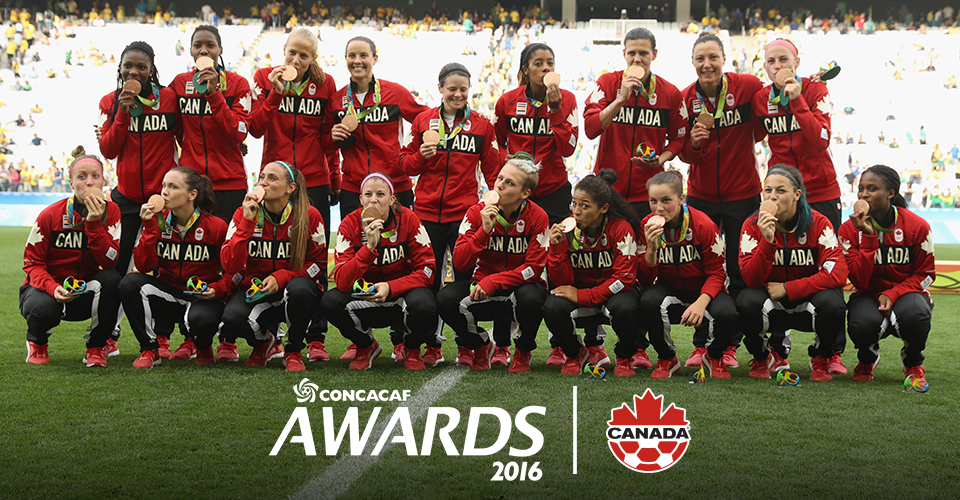 Canada Soccer’s Women’s National Team and head coach John Herdman have been honoured with the CONCACAF Outstanding Performance Award after a return to the podium in back-to-back Olympic Football Tournaments from 2012 to 2016.

“The rise of our Women’s National Team in 2016 shows that our investments in technical leadership and the guidance of our Women’s Head Coach John Herdman give us the opportunity to compete with any nation in the world,” said Canada Soccer General Secretary Peter Montopoli. “We are incredibly proud of each and every one of the players who achieved Olympic bronze in Rio and of our staff for the dedication and commitment to the game. This award is a welcome recognition of that effort and success.”

Coach Herdman, who also helped Canada set a national record with 15 international wins and jump to fourth overall on the FIFA/Coca-Cola Women’s World Ranking, led Canada Soccer’s Women’s National Team to a bronze medal finish at the Rio 2016 Women’s Olympic Football Tournament. Canada won five of six matches in Brazil, beating confederation champions Australia, Germany, and host Brazil along the way. In reaching the podium, they were the first Canadian team to reach the podium in back-to-back summer games in more than 100 years.

The CONCACAF Awards are designed to honour the year’s outstanding performers and achievements in confederation-sanctioned competitions involving national teams at all levels and age categories, including FIFA World Cup matches and qualifying for both genders. Performances also eligible for recognition included those achieved in professional club football leagues within the CONCACAF Member Associations, as well as the Scotiabank CONCACAF Champions League.

==========
Canada Soccer’s Bronze Medal Celebration match is 4 February 2017 at BC Place. Tickets to the home match in Vancouver are on sale now via canadasoccer.com/tickets starting at just $20 (plus applicable fees). A special ME+3 discount offer on ticket four-packs is available in select sections while groups of 10 or more are eligible for discounts of up to 30% off regularly priced tickets. In addition, BC Place Club Seats are available for fans looking for a premium match day experience and include a complimentary Canada Soccer scarf with each ticket.