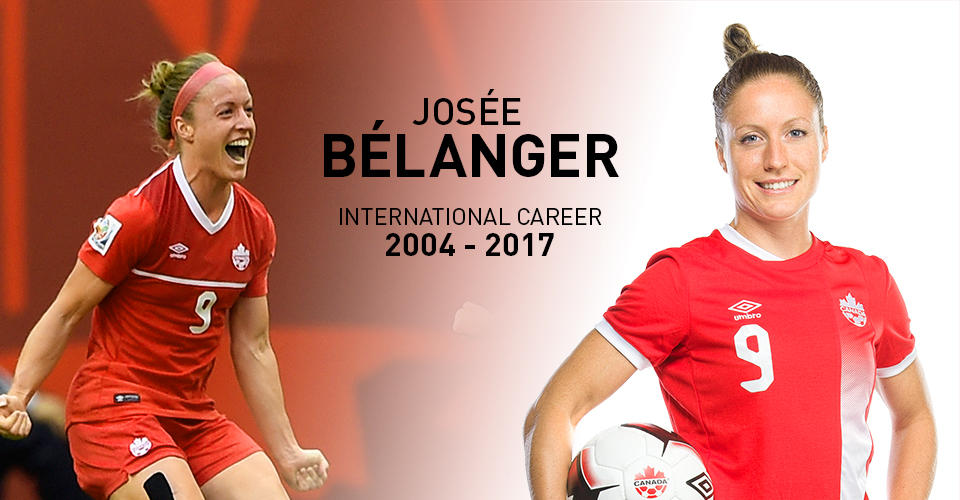 Both players will be honoured, at the upcoming Canada Soccer Women’s National Team home match against Costa Rica on 11 June in Toronto

Bélanger and Kyle, both former professional players, were CONCACAF champions and Olympic bronze medalists, with Kyle winning her medal at London 2012 and Bélanger winning her medal at Rio 2016. Both players also helped Canada finish in sixth place at the historic FIFA Women’s World Cup Canada 2015™. Bélanger scored the winning goal in the Round of 16.

Bélanger: A great role model
Josée Bélanger was a 2010 CONCACAF champion and Rio 2016 Olympic bronze medalist. She also won a CONCACAF youth title in 2004 as well as a 2015 Swedish league (Damallsvenskan) title with FC Rosengård.

“Over the past few months, I’ve taken the time to look back over my 25-year career. I’m leaving the soccer world with a sense of accomplishment, which for me is just as rewarding as winning an Olympic medal,” Bélanger said. “What I have retained from my career is everything I learned, through teamwork, guidance from my coaches over the years, the injuries, the wins as well as the losses. Soccer has enabled me to grow as a person first and foremost, and this is what I find most gratifying,” she concluded.

“Josée is always going to be a big loss to this team for what she brings off the pitch, she’s the epitome of a high performer – her lifestyle, her attitude to life, and I think a lot of our players look up to her and learn from her every single day,” said Head Coach John Herdman. “Josée has lived her life to perform for her country in every way shape and form. She’s been a great role model for the young players particularly, so to lose that within our team will be a big loss for our country. On the field, you’ve seen her – she’s just a competitor – and absolute machine. One of her strongest attributes is her mindset – you just cannot break this woman. She would be in as much pain as I’ve ever seen with the things we would ask her to do in fullback and she’d just keep going and never complain, and never show it. To replace that sort of mindset and high performance spirit is going to be tough. I wish her well for the future and I know she will be successful in whatever she does because she’s got great habits and we look forward to seeing her in Toronto when we can finally say goodbye.”

Kaylyn Kyle was a 2010 CONCACAF champion and London 2012 Olympic bronze medalist. She also won a CONCACAF youth title in 2008 and a Pan American Games gold medal in 2011.

“I think most people do not know how much this journey has meant to me,” Kyle said when announcing her retirement earlier this year. “To be able to pull on your jersey with a Canadian crest is one of the most amazing feelings in the world. Canada Soccer has allowed me to grow on both a personal and professional level. They have allowed to me to travel the world and meet some incredible people, but most importantly it introduced me to some of my closest friends in the world.”

“The biggest thing with Kaylyn has been her presence,” said Herdman. “She’s a competitor and that competitiveness brings a brings a presence to the training environment and off the pitch. When she’s gone, you realise what you’ve lost. Kaylyn would make sure that nobody got away with an offside decision in a training session. She would make sure a crossing and finishing session was competitive and a small-sided game felt like a world cup final. That’s what I love about her, she just loved winning – you miss that. One thing that really stands out about Kaylyn is her tactical knowledge. While she had this presence, she was also able to demonstrate a high level of football IQ. I think that’s going to bode well for her future. She’s going to be either a great analyst or a great coach someday because she reads the game better than most people I’ve seen and she can articulate the game better than most coaches I’ve heard. When people leave, you see what’s missing. Some players have been able to step into those shoes, but the presence Kaylyn brings is pretty special and I am sure she is going to take it to wherever she goes next.”

Both Bélanger and Kyle also played professional in the National Women’s Soccer League as allocated players through Canada Soccer. Kyle split four seasons between Seattle, Boston, Houston, Portland, and Orlando while Bélanger spent one season alongside Kyle in Orlando. The NWSL was established in 2013 in partnership between US Soccer, Canada Soccer, and the Mexican Football Federation.