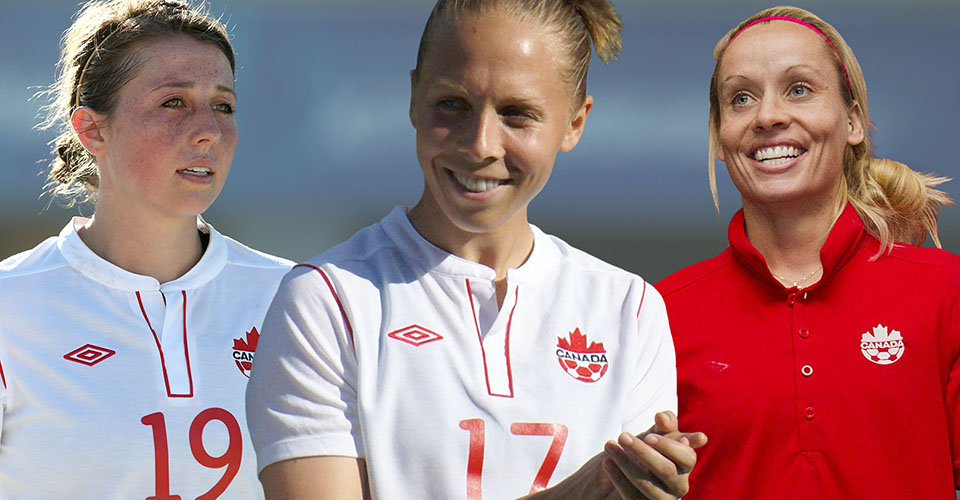 Brittany Timko Baxter, Chelsea Stewart and Kelly Parker will be recognized in a ceremony at half time at centre pitch.

Canada Soccer will honour three retired Women’s National Team players during the Vancouver match against the USA 9 November at BC Place.
Brittany Timko Baxter, Chelsea Stewart and Kelly Parker, all members of Canada Soccer’s London 2012 Bronze medal winning team, will be recognized in a ceremony at half time at centre pitch.
“We are delighted to have the opportunity to welcome back these players who have all had a great impact on Canadian soccer, and to honour them for their contribution to this team and our sport,” said Canada Soccer President Steven Reed.   “The London 2012 Olympics has gone down in history as a watershed moment for women’s soccer in Canada in part due to the dedication of these women.  On behalf of Canada Soccer, thank you Brittany, Chelsea and Kelly, for your commitment to excellence and congratulations on your wonderful international careers.”
Brittany Timko Baxter appeared for Canada 132 times during her international career.  A native of Coquitlam, BC, she was 16 years old when she made her debut for Canada in 2002.  A long-time staple on Canada’s midfield and front line, Timko Baxter won the golden boot at the FIFA U-20 Women’s World Cup 2004, and helped Canada earn several CONCACAF medals, and entry into FIFA Women’s World Cup competition.  In 2012, she helped Canada win the Bronze medal at the London 2012 Olympics, playing in the group stage, quarterfinal and Bronze medal match.
“When I was 5 years old, I wrote down a goal of playing for the National Team by the time I was 21. I was given the opportunity to play for the National Team at 16, and lived my dream putting on the Canadian jersey for 15 years,” said Timko Baxter.  “The experiences and memories will last a lifetime and the girls on the team became sisters. Thank you to my husband and son, my mom, dad and brothers and the rest of my family for always supporting me, and always believing in my dreams. You’ve always been my rock and I feel incredibly thankful to have you all in my life.   Thank you to Canada Soccer, my coaches and friends, and to the fans for making it so enjoyable to play in Canada and all over the world.  We always felt like we were at home when we saw the Canadian flag.   I am so incredibly thankful to have represented Canada and will continue to be the team’s biggest fan.  The future of soccer in Canada is exciting and I believe the best is yet to come!”
Chelsea Stewart made 44 appearances for Canada, beginning her international career at 18 with a gold medal at the 2008 CONCACAF Women’s Under-20 Championship, followed by a gold medal at the 2010 CONCACAF championship.  Raised in The Pas, MB, Stewart has played as a defender and midfielder, helping to qualify Canada for the London 2012 Olympic Games and earning the 2012 bronze medal as a finisher in four matches at the Olympic Games.
“Playing for Canada is one of the greatest honors of my life, and it has given me some of the best memories that I will forever cherish,” said Stewart.  “I have grown and learned so much both on and off the field thanks to everyone who was a part of my time with the national team.  I am so lucky to have had the chance to represent the red and white and play for the greatest fans. Thank you to all of my teammates, my coaches, Canada Soccer staff, the fans, my friends, and most importantly my family who has been there and helped me along the way.”
Kelly Parker, from Regina, SK, made 40 appearances for Canada Soccer’s Women’s National Team as a midfielder, debuting at 22 years old in 2003.  She played in a career-high of 20 consecutive international matches for Canada in 2011 and 2012.  Her final match for Canada was played in Coventry during the London 2012 Olympic Games, helping to earn Canada the Olympic bronze medal.
“My experience with Canada Soccer has changed my life. It allowed me to travel the world, challenged me to new heights, but above all it allowed my dreams to come true,” said Parker.  “It still feels surreal that we stood on that podium in London and watched our flag rise. Thank you, John and the rest of the staff for helping us recognize the power of believing. And, of course, to the incredible women who inspired me to be better every single day I’m honored to have played along side you. My family, friends, and fans you’ve supported me in every moment of my career and have been a part of my most special memories. I couldn’t have done it without you.”
Fan Advisory
Fans attending the Canada v USA match on 9 November will have the opportunity to meet Brittany Timko Baxter, Chelsea Stewart and Kelly Parker, all members of Canada Soccer’s London 2012 Bronze medal winning team, prior to kick off on the BC Place stadium concourse (Section 216) from 18:15-18:45 PT, courtesy of Bell.
22,500+ Tickets Sold – Secure your seats today!
With over 22,500 tickets already snapped up by fans for the Canada leg, the 9 November match is on track to become highest attended Canada Soccer Women’s National Team friendly match in Vancouver, surpassing the 22,508 record set in February.
Canada v USA 9 November at BC Place
It will be a clash between arch rivals when Canada hosts USA at BC Place at 19.00 PT (22.00 ET) on 9 November in the first of two matches between the North American foes, with a second match set for 12 November in San Jose, USA.  With Canada determined to reach the top of the FIFA world rankings, the battle between the world’s top ranked USA and fifth ranked Canada will be must-see matches.  Individual tickets for the match in Vancouver are on sale via Ticketmaster.ca.
How to watch from home
The Vancouver match will be available to viewers LIVE on Thursday, 9 November at 19.00 PT on TSN1, followed by replays of the match on RDS2 Friday, 10 November at 19.00 ET and Saturday, 11 November at 07.30 ET.