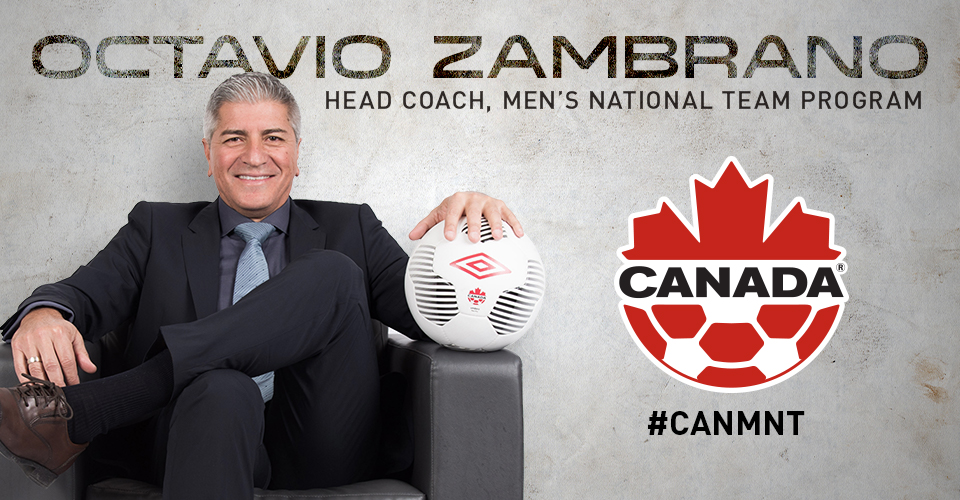 Zambrano has a wealth of experience as a player, technician, and coach. He has earned his UEFA A Diploma coaching award as well a USSF Coaching A Licence. He has more than 25 years of experience coaching in North America, Europe, and South America.

“We are very excited to welcome Octavio to Canada Soccer after our extensive search for a new Head Coach to lead our program into the next cycle of FIFA World Cup™ Qualifiers,” said Victor Montagliani, President, Canada Soccer. “Canada deserves to have its Men’s National Team Program perform on a consistent basis and Octavio’s experience within professional club and academy settings around the world will allow him to lead program alignment and solidify the second pillar of our Leading a Soccer Nation plan: consistent, world-class performances by our National Teams.”

Zambrano joins Canada Soccer after recently serving as Head Coach of Delfín Sporting Club in Ecuador’s Serie A. He previously served as Sporting Director, Head Coach, and Technical Director with CD El Nacional from 2014 to 2016 in the same league.

“I would like to thank Canada Soccer for this incredible opportunity to lead the Men’s National Team Program and align the strong and deep talent pool that exists from coast to coast,” said Zambrano. “My passion is the development of young athletes and I view football as part sport, part art, and part entertainment. I will look to portray all three through the tactics and player development within the Men’s National Team program.”

With the hiring of Zambrano, Canada Soccer will continue to build its base of talent across the country through partnership and collaboration with its member provincial and territorial soccer associations as well as professional clubs and academies. Zambrano’s arrival also integrates the entire program under his leadership, from the Men’s National Team and U-23/Olympic Team through to all national youth team programming from the U-14 to U-20.

This effort builds on Canada Soccer’s hiring of Jason deVos as Director, Development, who has overall responsibility for grassroots development with a focus on coach education and high performance programs. The alignment of development programming from the grassroots through to the national team continues the investment in the first pillar of the Leading a Soccer Nation plan: invest in technical leadership by supporting our players coaches and officials at all levels of the sport.

Zambrano will travel to Scotland this week ahead of Canada’s Men’s International Friendly on 22 March. He will assume coaching duties in Qatar at the U-23 tournament where Canada will face both Uzbekistan (25 March) and host Qatar (28 March).

Zambrano’s first home match as Men’s National Team Head Coach will be 13 June in Montréal when Canada faces Curaçao as part of both nations’ preparations for the 2017 CONCACAF Gold Cup. Tickets to the home international match go on sale this 29 March, with full details available at canadasoccer.com/tickets.

Formerly an attacking midfielder, Zambrano made his professional debut with Union Deportiva Valdez in his hometown Guayaquil in Ecuador’s Serie A. He then moved to the United States where he was enrolled at Chapman University and also spent two seasons as a player with the Los Angeles Lazers.

After transitioning to coaching, he established a proven track record of advancing his teams’ positions within their league standings in a short time span.

In Major League Soccer, he currently holds the second-highest winning percentage in league history with a 58.7% record in regular season. In addition to being an MLS All-Star coach on three occasions, he was the first MLS Head Coach to develop the methodology of training youth players within the club environment during his tenure with the New York MetroStars.

As head coach of New York MetroStars from 2000 to 2002, he took his team from last to first place in the Eastern Conference standings for the first time in the team’s history.

After coaching in Moldova and Hungary, Zambrano returned to USA to serve as an assistant coach with the Kansas City Wizards in 2009. After the team transformed into Sporting Kansas City in 2011, Zambrano helped the club finish first in the Eastern standings and reach the Conference final for the first time in four years.

In 2012, Zambrano led Deportivo Pereira to a record season in Colombia’s Categoría Primera B. The squad broke the record for the most points obtained in a single season by any Colombian professional team.

After two years in Colombia, Zambrano returned home to coach in Ecuador’s Serie A with CD Nacional and then Delfín SC.