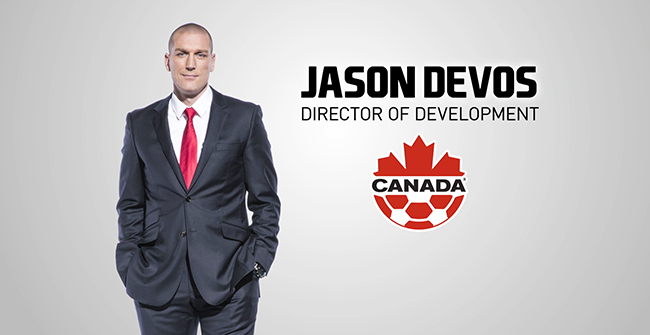 Jason deVos will join the organization as Director of Development

Canada Soccer is pleased to announce that Jason deVos will join the organization as Director of Development. In this newly created role, the former Men’s National Team and professional player will be responsible for the overall management, direction and development of coaching and grassroots development programs across Canada.

“The Director of Development is an important role for Canada Soccer as part of our 2014-18 Strategic Plan – Leading a Soccer Nation – pillar to Invest in Technical Leadership. Jason was the ideal candidate with his extensive experience in and knowledge of soccer development in the formative years leading into the 11-a-side game,” said Victor Montagliani, Canada Soccer President. We could not have chosen a more passionate soccer advocate to lead Canadian soccer’s change management.”

An honoured member of The Soccer Hall of Fame, deVos is a product of Canada’s development system and a decorated Canadian international and professional player. With nearly 20 years of experience as a player including stints as captain with the Men’s National Team, Dundee United, Wigan Athletic and Ipswich Town FC, he also spent time with the Montreal Impact. Notably, deVos was a member of the 2000 CONCACAF Gold Cup winning squad and was named to the Canada Soccer All-Time Canada XI in 2012.

“I am honoured to be joining Canada Soccer as the Director of Development and excited to carry on the great work that has been done across the country to grow and develop the game of soccer,” said deVos. I look forward to developing a strong working relationship with our Provincial and Territorial member associations as we evolve and enhance both our player and coach development systems in Canada.”

deVos has been involved in a change management grassroots development role previously at Canada’s largest soccer club – Oakville Soccer – and been a member of various Technical Committees at the Ontario Soccer Association since 2011. The holder of a UEFA Pro License and USSF A License, Canadians have relied on his expert analysis on air since his retirement in 2008, most recently as part of TSN’s soccer coverage.

“We are excited to welcome Jason into this role as an integral member of our technical leadership team where he’ll be responsible for enhancing the development of soccer in Canada,” said Peter Montopoli, Canada Soccer General Secretary. “The Director of Development will continue Canada’s position as a leading soccer nation through an investment in technical leadership and collaboration with our Provincial and Territorial member associations to oversee coach education, club development, long-term player development and high performance league oversight initiatives.”

deVos begins his new role on September 5, 2016 and will be based at Canada Soccer’s Technical Office in Toronto.