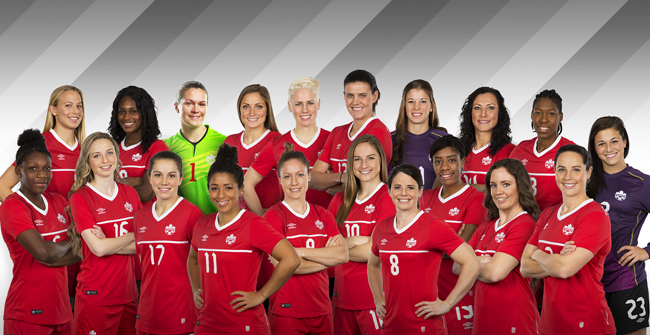 With just over two weeks until Canada’s opening match of the 2016 CONCACAF Women’s Olympic Qualifying Championship, Canada Soccer Women’s National Team Head Coach John Herdman has named the 20 players who will represent Canada in Texas. Canada will be looking to secure its spot at this summer’s Olympic Games through a victory in the semi-final knockout round, but the team’s goal for this competition is to take home CONCACAF’s top spot.

The roster, which features three goalkeepers, six defenders, five midfielders, and six forwards, has come together after Canada regrouped following its sixth place finish at the FIFA Women’s World Cup Canada 2015 this past summer. In selecting the 20 players, down from the FIFA Women’s World Cup roster of 23, Herdman has chosen a blend of experience and youthful vigour that he believes is the key to putting Canada atop the podium in Texas next month.

“We are really excited about this squad and the confidence, determination and skill they bring to the pitch,” said Herdman. “We had a strong group of players to select from, which made final selection extremely challenging, but we have put together a team that will go out there and get the job done, which is simply to make this country proud by qualifying for RIO 2016.”

Herdman selected 13 players who were part of the FIFA Women’s World Cup Canada 2015™ squad, 7 from the 2012 London Olympic bronze medal winning squad, and a total of 7 players 20 years old and under.

“We’ve been evaluating players, in and out of the Women’s National Team camp, and have had a lot of good opportunities to see players in high pressure environments, including the FIFA Women’s World Cup and Pan Am Games, but also through the EXCEL development program,” said Herdman. “The team we have selected today represents the best of Canadian soccer, consisting of a subtle blend of youth and experience. Right now, we are in a position to focus on the upcoming qualification tournament and hopefully position ourselves to defend our Olympic bronze medal this summer in Rio.”

Canada, currently ranked 11th in the world, will compete in Group B of the 2016 CONCACAF Women’s Olympic Qualifying Championship, opening its Olympic qualification campaign against 89th ranked Guyana on 11 February, before taking on 48th ranked Trinidad and Tobago on 14 February, and 76th ranked Guatemala on 16 February. Group A includes #1 ranked USA, Mexico (26th), and Costa Rica (34th) and Puerto Rico (108th).

Canada will play its entire tournament at BBVA Compass Stadium in Houston, which will also host Group B, the knockout round and final match.

Additional Notes:
Canada has twice qualified for the Olympics through the CONCACAF Women’s Olympic Qualifying Championship, each timing defeating Mexico in the semi-final to earn their Olympic berth, before being defeated by the USA in the final match. Canada went on to place eighth in 2008 Beijing Olympics and won bronze at the London 2012 Games.

In 2008, Canada won a silver medal at the CONCACAF Women’s Olympic Qualifying Championship in Mexico. After winning all three group matches, Canada beat home team Mexico 1-0 (Tancredi 25’) to earn a spot at the Beijing Olympics. In the final, Canada held the USA to a 0-0 tie in regulation time before each team scored in overtime (Lloyd 108’ and Tancredi 116’). The USA finally won the match 6-5 on penalty kicks.

As the host country, Canada won a silver medal at the 2012 CONCACAF Women’s Olympic Qualifying Tournament in Vancouver. After winning all three group matches, Canada won the semi-final 3:1 over Mexico (Sinclair 15’ and 76’, Tancredi 23’) to qualify for the London 2012 Women’s Olympic Football Tournament.