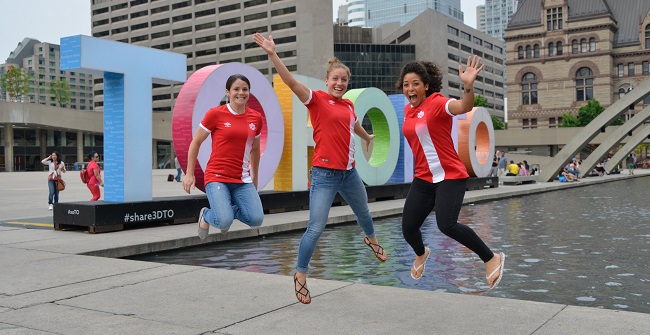 Canada Soccer has named the 20 player roster for the Road to Rio home match series against Brazil. Canada’s Women’s National Team will take on Olympic hosts Brazil in a two game series in Toronto 4 June and Ottawa 7 June, as both teams prepare for this summer’s 2016 Rio Olympic Games.

“Playing against Brazil is a true tier one test,” said Head Coach John Herdman. “Their attacking style and prowess is something we are going to have to be able to cope with defensively, but at the same time, as a group we have to find a way to win against a team that will be one of the favourites to medal in Brazil this summer.”

Canada’s roster for the home match series includes Olympic and FIFA Women’s World Cup veterans, as well as some new faces that have helped to bring increased pace to Canada’s side. Fans will have the opportunity to watch Canadian stalwarts including Christine Sinclair, Melissa Tancredi and Diana Matheson, play alongside young stars like Kadeisha Buchanan, FIFA’s top young player from the FIFA Women’s World Cup Canada 2015™.

As part of Canada Soccer’s bid to step on the Olympic podium and see the maple leaf raised at consecutive Olympic Games, the two matches against Brazil will be important tests to get Canada ready for the tournament in August.

Canada has maintained a rivalry with Brazil going back many years with a record of five wins, five ties and six loses since 1996. Most recently, Canada fell twice to Brazil in Brazil in a four nation’s tournament in Natal in December, before coming back and defeating the Brazilian side in the final of the Algarve Cup in Portugal in March.

“Hosting Brazil here in Canada gives us a great opportunity to prepare for the Olympics,” said Peter Montopoli, Canada Soccer General Secretary. “But it also gives us an opportunity to share our Olympic journey with Canadian soccer fans from coast to coast. The Canada Soccer Road to Rio series will bring home to our fans a taste of what’s to come in Rio this summer.”

“It’s fantastic that Canada Soccer have again been able to bring top class opponents to this country,” added Herdman. ““It’s great that our fans will be able to see us playing in truly meaningful matches before we leave for the Olympic Games.”

With both matches heading towards sell-out crowds – over 85% of tickets are sold for the Toronto match on 4 June and over 75% are sold for the Ottawa match on 7 June – fans are encouraged to purchase their tickets now to ensure they get a spot to see Canada play Brazil LIVE on home soil.

Ticket information for Canada v Brazil at BMO Field in Toronto, June 4th 2016: Fans can purchase tickets through Ticketmaster, by phone 1.855.985.5000, or in person from Ticketmaster retail outlets.

Ticket information for Canada v Brazil at TD Place in Ottawa, June 7th 2016: Tickets are on sale via CapitalTickets.ca, by phone at 613-599-FANS (3267), and in person at the TD Place Box Office.