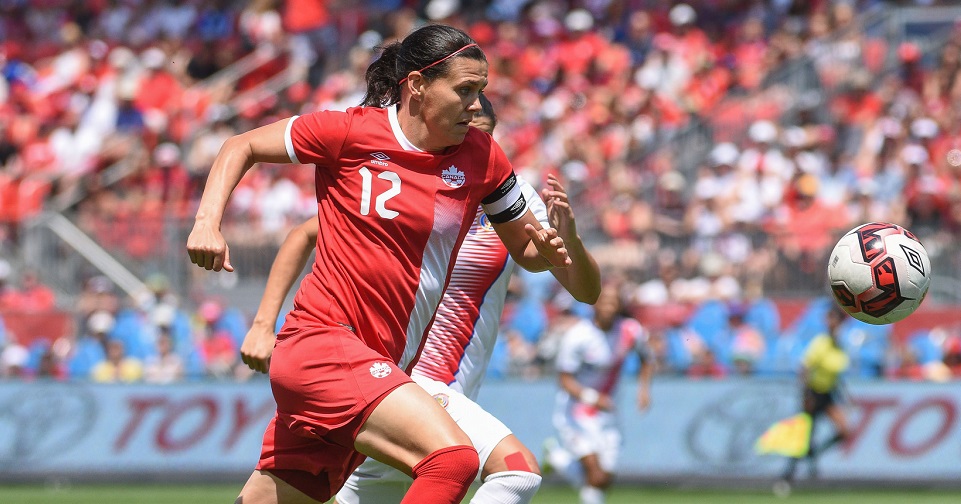 Canada Soccer has selected the 20 Women’s National Team Players who will represent the maple leaf against Germany 10 June in Hamilton, Ontario. Canada, the two-time […]

Canada and Germany, ranked fourth and third in the latest FIFA/Coca-Cola Women’s World Rankings, are expected to play in front of a capacity crowd at Tim Hortons Field. With less than 1,000 tickets remaining, fans can still be a part of the pro-Canadian crowd by visiting CanadaSoccer.com/tickets, Ticketmaster.ca or by calling 1.855.985.5000. For fans across Canada, the Canada-Germany match will also be broadcast live on TSN2 and TSN GO (14.00 ET / 11.00 PT).

“We’ll be bringing a very experienced squad to Hamilton, but we are also continuing to create opportunities for some of our young EXCEL players,” said Kenneth Heiner-Møller, Canada Soccer’s Women’s National Team Head Coach. “The mix is close to optimal and we are excited to bring the group together in June. We are preparing for October’s 2018 CONCACAF Women’s Championship which serves as our FIFA Women’s World Cup™ qualification tournament, so this is a great opportunity to dig into our pipeline and give some additional young players an opportunity to be tested against one of the best teams in the world.”

Canada and Germany have faced each other three times since the FIFA Women’s World Cup Canada 2015™, including in the third match of the Rio 2016 Olympic Tournament group stage when Canada, led by Ancaster’s Melissa Tancredi, topped Germany 2-1 at Estadio Nacional Mané Garrincha in Brasilia. Canada later fell 2-0 to Germany in the Olympic semi-final at Estádio Mineirão in Belo Horizonte, before going on to capture Olympic Bronze against Brazil.  Canada and Germany faced each other once in 2017, in a friendly in Erfurt, Germany where the home side topped Canada 2-1 with an 86th minute goal to secure the victory.

“This is really a great opportunity for us as a team to face one of the best in the world, on home soil,” said Heiner-Møller. “We are expecting it to be a very tough match. Germany are the reigning Olympic Champions, but they have also been dominant for a long time and we are striving to accomplish this for Canada. Getting to the top is one thing but staying there is different type of challenge and something Germany has been able to do, so this will be an excellent test of where we are against a world-class, tier-one team.”

The 10 June match will be the first home match for Heiner-Møller since taking the reigns of Canada Soccer’s Women’s National Team in January. It is also Canada’s first time back in Hamilton since a friendly match ahead of the FIFA Women’s World Cup Canada 2015™.

“We are very much looking forward to playing in Hamilton,” said Peter Montopoli, Canada Soccer General Secretary. “It will be an exciting match for Canada as Kenneth makes his first home match appearance as Head Coach of Canada Soccer’s Women’s National Team. We are looking forward to returning to Tim Hortons Field to compete against a truly, world-class opponent in Germany in front of our Canadian fans.”

Canada Soccer’s Women’s National Team will also be wearing the new #CanadaRED Umbro home jersey for the first time. The jersey, unveiled in May, is inspired by one of Canada’s most symbolic emblems, the Canadian maple leaf.  The new home kit will be available for sale at the match and is available now from the official Umbro Canada Soccer store via CanadaSoccer.com.