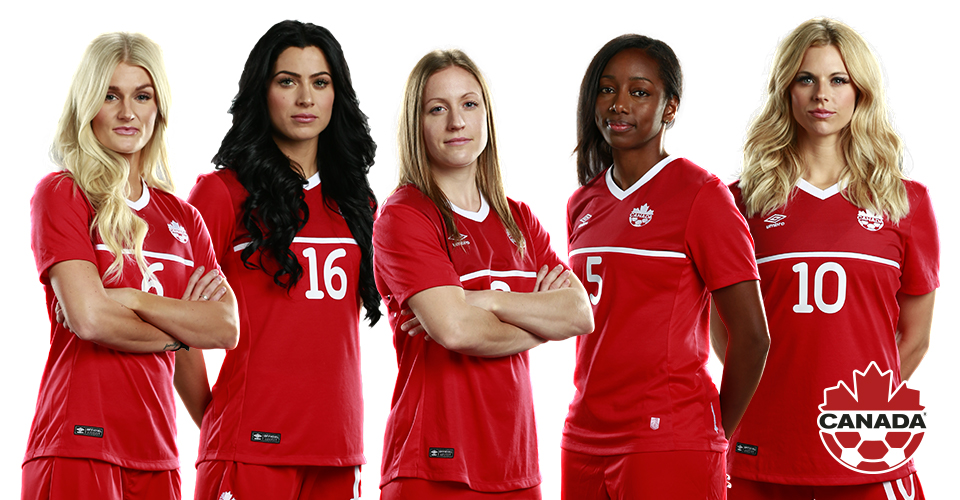 Fans will get a chance to salute five Olympic bronze medal winners at the upcoming Women’s National Team international match in Toronto this Sunday 11 June. […]

Fans will get a chance to salute five Olympic bronze medal winners at the upcoming Women’s National Team international match in Toronto this Sunday 11 June. The special celebration will honour five players who have all taken their bow from the international game: Rio 2016 star Josée Bélanger and London 2012 heroes Jonelle Filigno, Robyn Gayle, Kaylyn Kyle, and Lauren Sesselmann.

Alongside Bélanger and Kyle who announced their retirement from international football earlier this year, London 2012 bronze medal winners Filigno, Gayle, and Sesselmann have all confirmed their departure from the international game. The trio were all national heroes when Canada brought home their first medal in a Summer Olympic team sport in 76 years.

Filigno of Mississauga, Ontario was a 2010 CONCACAF champion and London 2012 Olympic bronze medalist. In all, she participated in two FIFA Women’s World Cups and two Women’s Olympic Football Tournaments. She also won a CONCACAF youth title in 2008. She won Canada U-20 Player of the Year honours in both 2008 and 2010.

Gayle has since joined the Women’s National Team as a full-time staff member focusing on effective team culture.

Sesselmann won an bronze medal with Canada at the London 2012 Olympic Games. After making her international debut in 2011, she won a Pan American Games gold medal in 2011 and finished sixth with Canada at the FIFA Women’s World Cup Canada 2015.

All three have also played professionally in the National Women’s Soccer League as allocated players through Canada Soccer. Filigno played for Sky Blue FC, Gayle for Washington Spirit, and Sesselmann for Houston Dash. The NWSL was established in 2013 in partnership between US Soccer, Canada Soccer, and the Mexican Football Federation.

Canada Soccer will also officially honour Amy Walsh as a member of the Canada Soccer Hall of Fame as part of the Women’s National Team match on 11 June.

Walsh has been inducted as a player as part of the Class of 2017.

A CONCACAF champion in 1998, she played in two FIFA Women’s World Cups and one Women’s Olympic Football Tournament. She made 102 international appearances, including a record 43 consecutive starts from 1998 to 2001. She served as Canada’s captain for more than 25 international matches.

Walsh, who made her international debut 19 years ago in Ottawa, will have her family by her side when she is honoured in the pre-match ceremony. She will then watch the match as part of the #CanadaRED home crowd that will be fully behind Canada Soccer’s Women’s National Team.

The Women’s International Friendly match in Toronto is part of a three-match Summer of Soccer Series in Canada which includes back-to-back matches against Costa Rica (Winnipeg and Toronto) and a Men’s International Friendly match against Curaçao (Montréal). Tickets to the match in Toronto is available via canadasoccer.com/tickets.

Jonelle Filigno-Hopkins
“I just want to thank every individual – husband, family, friends, teammates, coaches – that supported and allowed me to live out my dream and represent my country for nine incredible years. Canada Soccer has taught me some of the most invaluable life lessons and intangible skills that I have transitioned from the pitch to now corporate world. Canada soccer has played a huge role in the person I am today. I will cherish all of the incredible moments, memories, and amazing relationships I have built along the way.”

“Jonelle really found a level that not many athletes reach when she hit the Olympic Games in 2012. Her competitive spirit is one thing that always stands out to me. She would battle and fight for every single ball, and when she got into the box she just knew where that goal was. She was always quiet around the team, and respectful, but on the field she was an absolute battler. When I think back on Jonelle, I recall her composure in the box, but what stands out the most is her fighting spirit.”
-Canada Soccer Women’s National Team Head Coach John Herdman
Lauren Sesselmann
“Ever since I was a little girl I dreamed of playing on the international stage. Day in and day out I worked to make that dream come true. Representing Canada is the most surreal and incredible thing that has ever happened to me. Every moment I got to take the field with my teammates, got to put on that symbolic and beautiful red and white jersey, and got to hear the crowd cheering for us were the absolute best moments of my life. I am incredibly proud of my career and I can’t thank Coach Herdman, the staff and my “sisters” for giving me this honor and making memories of a lifetime. It’s never easy to retire from something you love so much, but I take with me so much and I look forward to continuing to cheer on the next generation, who I am so proud of. Thank you to my family, friends and to all the BEST FANS IN THE WORLD – your support over these years are my everything and nothing would be possible without you. I love this beautiful game and I look forward to continuing to inspire you all in every way possible.”

“Lauren joined the family late in 2011, right before the 2012 Olympic games. She started out as a centre forward, converted to a left-back and finally played in centre back where she was instrumental in winning a Gold Medal at the Pan American Games and helped lead us to a London 2012 bronze medal. Lauren played out of her skin during the London Olympics, against some of the best strikers in the world, and formed a wonderful partnership with Carmelina Moscato. With Lauren, I’ll always remember those big tackles, those last-ditch tackles where everything was left on the line.”
-Canada Soccer Women’s National Team Head Coach John Herdman
Robyn Gayle
“I must express my utmost gratitude to every and any one who has played a part in my soccer journey. Reflecting on my career, I’m amazed to realize the amount of people who have influenced and supported me along the way. I wish this part of the journey never had to end, but I know the connections and memories I’ve made through this beautiful game, are for life. Thank you to my family, friends, coaches, support teams and teammates (#V’s) for making every moment of this adventure an incredible one & Thank you to Canada Soccer and our amazing fans for continuing to support our program-we have some amazing things to come! Playing the game I love, with people I love, for the country I love, has been the greatest privilege and blessing… for this, I am eternally grateful. Thank you.”
“Robyn was an integral player on the London 2012 and Pan-American Games teams, but she was also the soul of the team. She is an unbelievable teammate whose values and principles are absolutely “true north”, and who always leads by example. She carried a lot of injuries in the time I’ve worked with her, and I don’t think I had the best Robyn Gayle because of the amount of injuries she was dealing with, but within any of the situations of adversity, whether with injuries or selection, she was always able to show other people how to behave, how to be selfless and give yourself to the team. Without Robyn, we wouldn’t have medaled in London, because she could bring this team together. And in 2016 she did the same. We brought her onto the staff because I can talk the talk, but Robyn can walk it every single day. When players see that – when she speaks – its very powerful.”
-Canada Soccer Women’s National Team Head Coach John Herdman
Amy Walsh, Canada Soccer Hall of Fame honoured member
“I think it is a really big thing mentally for an athlete to play at home in front of a crowd that is rooting for you, just to hear that roar that they are there for you no matter what. It is a massive thing for an athlete to play at home and really feel that unconditional support whether from family or a great fan base.”