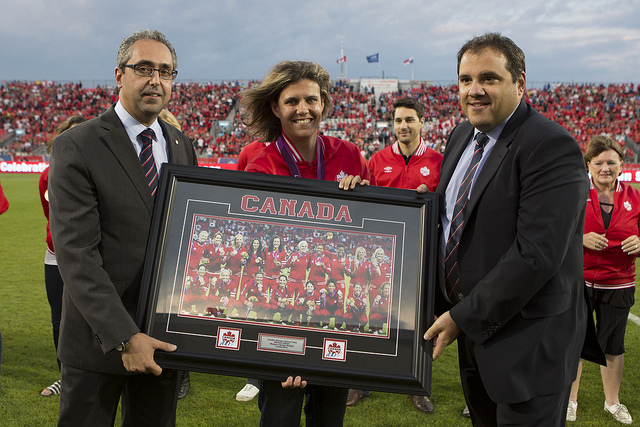 The Canadian Soccer Association will pay tribute to Christine Sinclair’s record-breaking goal-scoring season with a special plaque to be presented in advance of the team’s final national camp of the 2012 season.

With 23 goals in 2012, Sinclair set a new Canadian record for goals in a season at the international “A” level. This marks the third time that Sinclair has established a new single-season record for Canada, albeit this time she did so by also setting a record for the biggest improvement on the previous record.

In 1998, Silvana Burtini bettered the national record by four goals with a 14-goal season that included a CONCACAF Women’s Championship. She held the record for just two years before Sinclair bettered the mark with a 15-goal season as a 16/17-year old rookie in 2000.

In 2007, Sinclair set a new record by scoring 16 goals, again a one-goal improvement on a previous record. Then in 2012, she obliterated the previous record with a 23-goal campaign that included a bronze medal at the London 2012 Olympics.

Sinclair opened her 2012 account with a four-goal game against Haiti on 19 January and then closed it with a famous three-goal hat trick against USA on 6 August at the Olympics. She scored in 14 different matches, yet another Canadian single-year record. In games in which she scored, Canada won 12 out of 14 times.

Before 2012, Sinclair had scored 120 goals in 12 seasons, an average of 10 goals per season. With now 143 goals to her credit, she ranks third all-time amongst women’s footballers behind active Abby Wambach (148) and retired Mia Hamm (158).