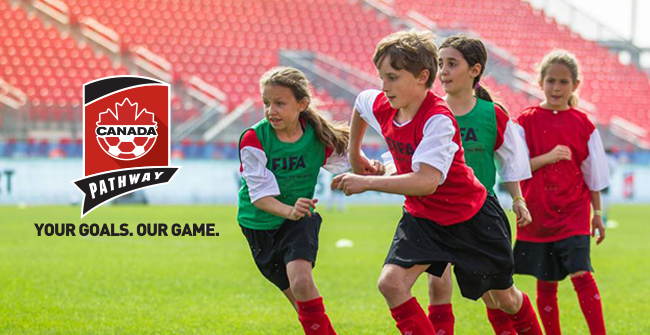 On Tuesday 3 June Canada Soccer unveiled its new unified technical development vision for soccer in the country, aptly titled Canada Soccer Pathway. Your Goals. Our Game. A direct implementation of the strategic priority it had set for the organization in the recent Strategic Plan Leading a Soccer Nation, the Canada Soccer Pathway will result in the coordinated identification and development of elite players through a structure that relies on regional training centres, scouting networks and professional clubs, and provides a continual and aligned pipeline for all Canadian National Teams.

“Canada Soccer is committed to increasing the technical ability of our players, from grassroots to National Teams, and encourage lifelong participation regardless of age, gender or ability,” said Victor Montagliani, Canada Soccer President. “The Canada Soccer Pathway will guide our investment in technical leadership and steward the development of Canada’s players, coaches and officials in a cohesive and deliberate manner on a national scale.”

The Canada Soccer Pathway is formed by three streams of play: recreational, competitive and EXCEL, the high performance arm of Canada’s soccer landscape.

“The Canada Soccer Pathway is a roadmap for players of all ages and abilities that want to play soccer at the recreational, competitive or EXCEL levels,” explained Sylvie Béliveau, Canada Soccer Long-term Player Development Manager. “It is built around the principles of long-term player development and encourages lifelong participation. At Canada Soccer, we believe all players deserve the best possible soccer experience, and our Canada Soccer Pathway is designed to place their needs front and centre at each and every stage.”

While the recreational and competitive streams of play are largely delivered through clubs and schools across the country, the EXCEL stream is designed to ensure more of Canada’s exceptional young players find their way into the top competitive environments: professional clubs and National Teams.

For Canada Soccer Men’s EXCEL Pathway, led by Canada Soccer Technical Director Tony Fonseca, the focus is put on developing a complete player and instilling a philosophy of play that will remain consistent throughout the athlete’s journey, from the moment he enters the program via one of Canada Soccer’s ID camps or by joining a pro-club academy, to the time he joins the professional ranks and potentially gets the opportunity to put on the maple leaf for Canada’s Men’s National Team.

“Canada Soccer’s vision is to re-align all aspects of development and form one cohesive system that can bring long-term success for soccer in Canada,” said Fonseca. “This will be achieved by establishing and sustaining high standards, from the youth to senior levels, elevating the level of competition using the targeted approach of the four corners of development to construct a complete player, and developing a team approach to which all contribute.”

As Canada’s professional soccer structure expands, so will Canada Soccer Men’s EXCEL Pathway opportunities. Currently driven by a national curriculum, annual Canada Soccer ID camps and youth National Teams projects, the interrelation with pro-cub academies and professional clubs will play an instrumental role in providing the best opportunities possible for our Canadian players. The development of a home-grown system in which our best players can compete remains crucial to our success.

“We are committed to supporting Canada Soccer’s technical vision, along with the continued development of Canadian Soccer players as they evolve through grassroots programs. At Toronto FC, we are forever committed to growing the game in Canada as evidenced by our academy and youth development programs,” said Toronto FC General Manager Tim Bezbatchenko. “We will continue to provide guidance, technical analysis, and leadership to ensure we are delivering on the Canada Soccer Player Pathway.”

Canada Soccer Women’s EXCEL Program, under the direction of Canada’s Women’s National Team Head Coach John Herdman, is the new approach being adopted by Canada Soccer to unite and strengthen the ways we identify and develop the most promising young female athletes and help drive women’s soccer forward. Built on developing players across four corners – physical, mental, technical/tactical, and social/emotional – it provides a clear and continuous pathway across the country.

“Consistent world-class performance on the highest stage is reliant on a development system that everybody in soccer believes in and contributes to,” said Herdman, Canada’s Women’s Head Coach and Women’s EXCEL Program Director. “Canada Soccer Women’s EXCEL Program will help develop a new Canadian soccer DNA where players demonstrate a perfect blend of control, precision and power, while giving players access to the best youth talent specialists in the country.”

Canada Soccer Women’s EXCEL Program features four classes that intertwine and feed the conveyer belt towards the Canadian Women’s National Team: the Women’s Regional EXCEL Centres, a licensed year-round program delivering, through the Provincial/Territorial Member Associations and partners, a standardized national curriculum for female players U-13 to U-18; the Women’s National EXCEL Program, presented by Bell, a continuous six-year cycle that brings together U-14 to U-17 and U-18 to U-20 players having demonstrated the ability to meet the highest standards across the Regional EXCEL Centres; EXCELeration, supplemental training for targeted athletes prior to having them join Women’s National Team activities; and a network of recommended schools that are recognized as being committed to the support and delivery of training at EXCEL program standards.

“Canada’s Women’s National Soccer Team changed the landscape of summer team sports in Canada with their performance in the 2012 Olympic Games in London,” said Anne Merklinger, Chief Executive Officer of Own the Podium. “The bronze medal was Canada’s first medal in a traditional summer team sport since 1936. Inspired by the performance in 2012, young Canadians of all ages have since been flocking to the soccer pitch. Canada Soccer has answered the call and developed a pathway to the podium with the EXCEL Program. Own the Podium is an enthusiastic supporter of Canada Soccer’s Women’s EXCEL Program. We believe this is a game changer in developing future Olympic women’s soccer champions.”

The Canada Soccer Pathway will continue to evolve and expand, including coaches, officials and administrators development paths in a near future, which in turn will encourage and stimulate the growth of the game in Canada.

The 3 June unveil of the Canada Soccer Pathway also served as an introduction to the program’s fresh brand that will now permeate every aspect of Canada Soccer’s technical properties. As the overarching brand, Canada Soccer Pathway outlines in a clear and simple manner the national nature of the program. The tagline Your Goals. Our Game. speaks to the alignment of our systems across the country and the collaborative efforts from all stakeholders to achieve success. As a whole, Canada Soccer Pathway. Your Goals. Our Game. will become the identifying statement of Canada’s soccer community, showcasing each participant’s goals and our collective pride in the beautiful game.

Canada Soccer also released two new guides: a Long-term Player Development Community Guide and a Women’s EXCEL Program Guide for Players and their Parents. These, in addition to the Canada Soccer Pathway graphic and additional information on player development in Canada, are available on canadasoccer.com/pathway.