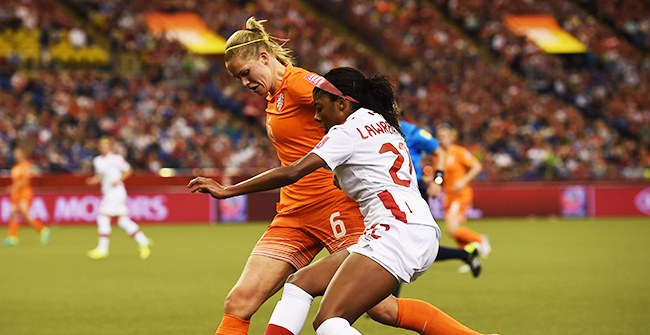 Canada Soccer has released the 19 player Canada’s Women’s National Team roster for the upcoming camp from 4-13 April and international friendly against the Netherlands on April 10th in Eindhoven.

Canada is continuing its preparations for the 2016 Rio Olympics after qualifying in February with a second place finish at the CONCACAF Women’s Olympic Qualifying Championship. The squad went on to win the Algarve Cup weeks later with a 2-1 win over Olympic hosts Brazil in the final.

All of the 19 players Head Coach John Herdman has called into camp were on the squad that recently put Canada atop the podium at the Algarve Cup for the first time in Canada’s history. With the exception of a goalkeeper change, Sabrina D’Angelo has replaced Erin McLeod, every player called into the Netherlands camp was part of the Olympic qualification squad. McLeod sustained an ACL injury with her club team and is still assessing her options as the team travels to the Netherlands.

The Netherlands match in April will be Canada’s last international piece before it returns to play on home soil against Brazil in a Canada Soccer Road to Rio series with matches taking place in Toronto June 4th and Ottawa June 7th. Tickets are now on sale for both home matches at canadasoccer.com/tickets.

“The Netherlands are a strong team and have made significant progress since the FIFA Women’s World Cup, rising through the rankings with wins over both France and Japan,” said Head Coach John Herdman. “Playing in-form teams that present tough tactical challenges is an integral part of the process to get our players ready to defend our podium spot. We expect the match against the Netherlands will be very difficult, but our team has developed momentum this year and will be up for the challenge. Playing the Olympic hosts Brazil at home will be our most important test. We’ve built a fierce rivalry in recent years so it will be great for our Canadian fans to see the sort of intensity these games are played at.”