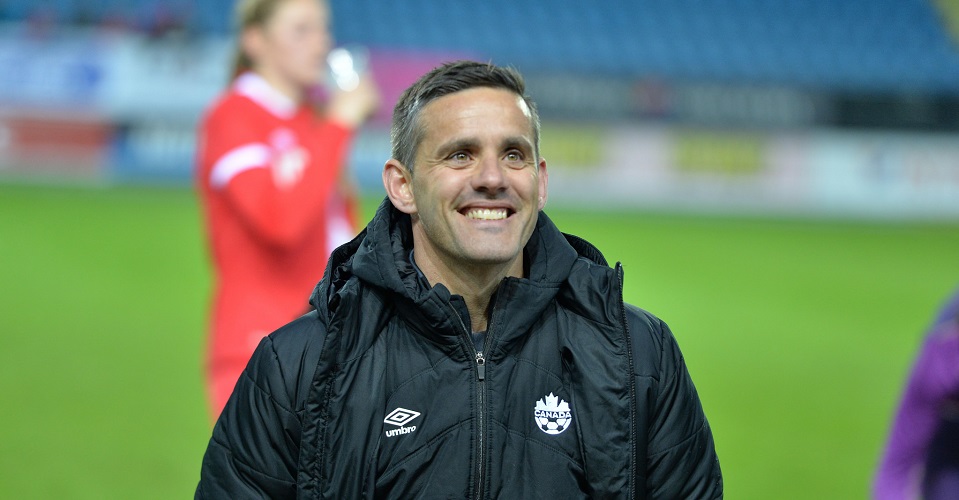 The Jack Donohue “Coach of the Year” Award is presented to a Chartered Professional Coach (ChPC) for their outstanding contributions as one of Canada’s top coaches. The award recognizes a coach’s dedication to the profession of coaching, commitment to continual improvement, and the successful performances of his or her athletes during the past competitive season.

It is easy to point to John’s record with Canada to demonstrate his effectiveness as a high-performance coach, in earning back-to-back Summer Olympic medals he’s achieved in team sport something no other coach in Canada has done in over 100 years. What makes him exemplary though, is his work ethic, his passion, his preparation and his attention to detail.

“Having known Jack Donohue, as a mentor early in my career in sports and as a personal friend, I can say with confidence that John is a true representative of what Jack stood for, both in his values and character,” said Canada Soccer General Secretary Peter Montopoli. “In working with John over the past six years, I have had the opportunity to get to know him as a coach, but more importantly as a person. His spirit and passion for his sport, his players, and his family are traits he shares with Jack Donohue and what make him an exemplary person. On behalf of Canada Soccer, I would like to thank the Coaching Association of Canada for bestowing this honour on John and for remembering a dear friend by celebrating excellence in sport.”

Herdman will join Canada’s most deserving and influential coaches and sports administrators being honoured this evening at the 2017 Petro-Canada Sport Leadership Awards Gala in Calgary, AB.

“John’s leadership has impacted not just Canada’s performance at back-to-back Olympic Games, but has also raised the profile of women’s soccer throughout the country,” said Lorraine Lafrenière, Chief Executive Officer, Coaching Association of Canada. “John’s work ethic, passion, and preparation combined with his dedication to the team, the program, and the country make him the well-rounded coach any leader would strive to emulate. We’re honoured to present John Herdman with the Jack Donohue Coach of the Year Award.”

John Herdman’s dedication to coaching is on display every day. Whether it is televised nationally, in team meetings, or even as he plans and prepares for future sessions, John’s competitive drive and his love of sport is evident. John has said that great people achieve greatness when they ‘are good” when nobody is watching; a statement that speaks volumes to his integrity, but also his positive attitude.

“I’m humbled by this honour. I’ve worked in coaching for over 20 years but have never felt like I’ve done a day’s work, so to be recognized for doing something you love and is your absolute passion, it feels strange, in a good way. When I read about Jack Donohue, who he really was and what he contributed to people, I honestly feel like I’ve still got a long way to go to be that good,” said Herdman. “There’s a lot of amazing people in this country working in sport who bring their passion every day and receive little recognition other than the smiles of their athletes; for me it’s always been that simple. It means that I have some amazing people around me and through their dedication and commitment to a shared vision for soccer in this country, they’ve raised me and our sport up on their shoulders. It means my kids get to see their dad achieving something and that’s important to me. Hopefully they’ll bring me a cup of tea in bed at the weekend. Thank you to Canada Soccer, Canada’s players, and the fans who have supported and nourished soccer in this country.”