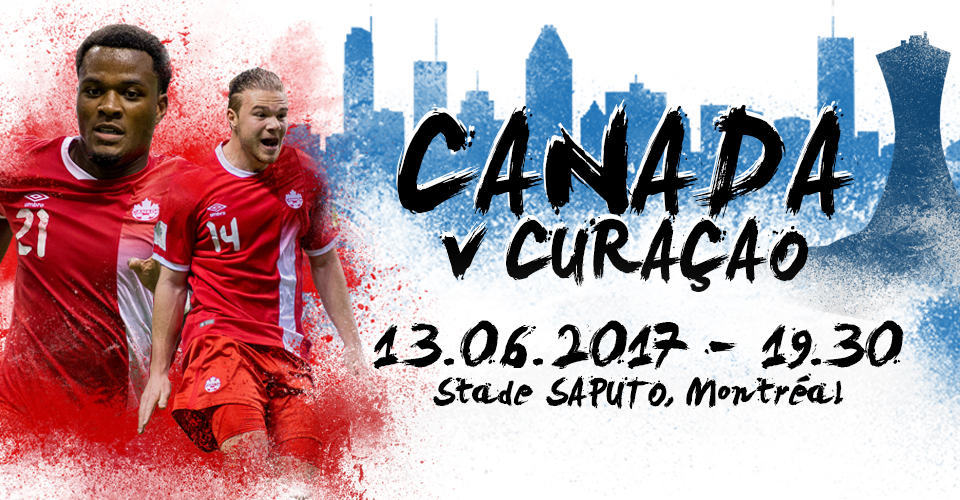 Canada Soccer’s summer quest at the 2017 CONCACAF Gold Cup will get its start in Montréal when the Men’s National Team plays at home on Tuesday 13 June against Curaçao. The Men’s International Friendly match will help prepare both nations ahead of the biennial CONCACAF Gold Cup which starts just three weeks later.

Canada last played in Montreal at Stade Saputo in September 2010 when they defeated CONCACAF rival Honduras in a 2-1 victory.

Tickets to the June home match go on sale this Wednesday 29 March. The Montréal match will bookmark an exciting June series of international soccer matches which will see the Women’s National Team face Costa Rica on 8 June in Winnipeg and 11 June in Toronto.

The 13 June match continues Canada’s priority to play on ‎each of the National Team windows on FIFA’s international calendar. Both Canada and Curaçao are preparing for the 2017 CONCACAF Gold Cup.

Over the past two years since the 2015 CONCACAF Gold Cup, Canada’s record is eight wins, four draws, and six losses in 18 international matches, including a 4:2 win over Bermuda on 22 January 2017.

Curaçao will participate in the CONCACAF Gold Cup for the first time this summer under the lead of head coach Remko Bicentini. Bicentini was appointed as Curaçao’s head coach in September 2016 after serving as Patrick Kluivert’s assistant in the last round of FIFA World Cup Qualifiers as well as the early rounds of Gold Cup qualifying.

Since 2015, Curaçao has posted an international record of six wins, three draws, and three losses in 12 matches, including five-straight wins in 2016. Bicentini was at the helm for both Curaçao victories in Gold Cup qualifying in October 2016.

TICKET DETAILS
Tickets for the Canada v Curaçao match will go on sale on Wednesday, 29 March at 10.00 local time via canadasoccer.com (10.00 ET / 07.00 PT). The launch of ticket sales will be preceded by a pre-sale for Canada Soccer Insiders, and past purchasers of Canadian National Team matches. Fans interested in receiving access to the presale offer for these matches are encouraged to subscribe to the #CanadaRED newsletter via canadasoccer.com. Tickets start at just $20 and have been priced to ensure that the match is accessible for all members of the Canadian soccer community.