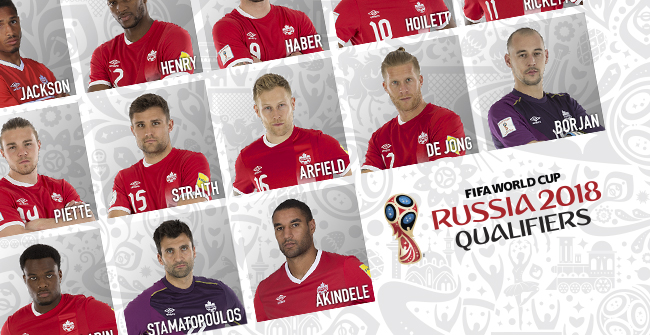 Canada Soccer have released their 23-man squad for the upcoming 2018 FIFA World Cup Russia™ Qualifiers in San Pedro Sula, Honduras and Vancouver, British Columbia, Canada. The September series represents a final two-match, three-nation dash for one spot in CONCACAF’s final round of qualification matches for Russia 2018, “The Hex.”

“Our players have demonstrated an excellent commitment along the way,” said Benito Floro, Canada Soccer’s Men’s National Team Head Coach. “The players trust in their capacity to achieve a place in the Hex.”

Of the 23 players in camp, 19 of them have already been part of this CONCACAF semi-final round of FIFA World Cup Qualifiers. The group features a mix of players either midway through their 2016 season or at the onset of their 2016-17 season. Added to the mix are goalkeeper Maxime Crépeau, centre back André Hainault, fullback and midfielder Jamar Dixon, and striker Simeon Jackson.

“We will only have a short window with the players in late August, just a few days for practising tactical matters and preparing a positive mentality. As we have done in previous camps, we will ensure we are focused, efficient, and detailed in our work ethic so that we can continue to have a positive environment for the players.”

There is plenty of experience in this group, starting with four-time Canadian Player of the Year Atiba Hutchinson who recently helped Beşiktaş JK win the Turkish Süper Lig and qualify for UEFA Champions League. Hutchinson is in his third cycle of FIFA World Cup Qualifiers and has made 75 appearances at the international “A” level. Among active players, only Julian de Guzman (unavailable through injury) has made more international appearances than Hutchinson.

SUPPORT #CANADARED, BE CANADA’S 12th MAN
After an away match in Honduras on 2 September, Canada will return home to face El Salvador in a critical match on 6 September at BC Place in Vancouver. Canada will need the support of the 12th man at home to help build a sea of #CanadaRED supporters, tickets to the match start as low as $25 (plus applicable fees). In addition, a special ‘Me+3’ offer will be available for this match. When purchasing three full price tickets in select sections, fans will receive the fourth one free. This offer is available via Ticketmaster.ca by selecting the ‘Me+3’ offer.

Group discounts are available with groups of 10 or more eligible to receive discounts of up to 30% off regularly priced sections. To request group tickets, complete the group order form indicating the price point and quantity of tickets you are wishing to purchase. Please note that group tickets will be processed on a first come, first served basis. For complete information visit the group ticket section on CanadaSoccer.com/Tickets

The sea of #CanadaRED is rising again! Secure your seats on the Road to Russia 2018 at https://t.co/ZzVLpHip3ahttps://t.co/1l24gbCV2G

ROAD TO THE 2018 FIFA WORLD CUP RUSSIA
The 2018 FIFA World Cup Russia™ is the biggest single-sport event in the world. From 211 member associations from around the world, 32 finalists will qualify for the 32-day event that is played in 11 cities from 14 June to 15 July 2018.