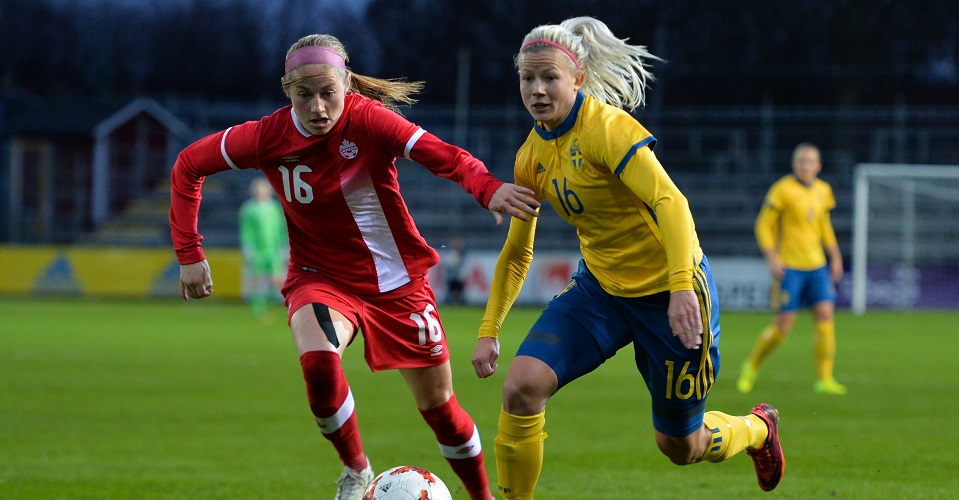 Canada Soccer’s Women’s National Team defeated Sweden 1-0 in Trelleborg, Sweden 6 April, in its first of two international friendlies in Europe. Canada’s lone goal came in the 34th minute when Janine Beckie received a perfectly placed pass from Sinclair, and slipped the ball past the keeper.

MATCH CENTRE: CANADA 1:0 SWEDEN
“It’s a great result to beat Sweden, in Sweden,” said Head Coach John Herdman after the match. “We knew it was going to be a tough game, but I think the team played very well. We came out strong in the first half, and the second half was all about game-management – when you are a goal up at halftime, our job is to ensure we come away with the points.”
Canada had several strong chances, including a blistering shot from Sophie Schmidt that forced the Sweden keeper to make an leaping, outstretched save. Despite the many chances, Canada’s control of the ball stood out for it’s continuity and precision.
“It was a real team performance tonight,” said Herdman. “It was arguably some of the best possession play I’ve seen from our team. We’ve been working on that as a team and have made it our intent to move forward in that space. I’m proud of what they put out there tonight against a really physical Sweden team.”
Centreback Shelina Zadorsky, was likewise pleased with the team’s control and possession. “In the first half we had some really good passages of play, and the goal was amazing,” she said. “We struggled to find our rhythm a bit in the second half, but I am proud of everyone for grinding out that win and getting a clean sheet.”
Canada now will look forward to another difficult match as it prepared to take on Germany, the top ranked team in the world, 9 April in Erfurt, Germany at 15:00 local (09:00 ET / 06:00 PT).
“Coming out of this match the team will be a bit bruised and battered, but we knew how physical it would be. We will be focusing on recovery and we’ll be fresh and ready for Germany on Sunday,” said Herdman.
“It’s a bit of a revenge match, you could say,” added Zadorsky. “Meeting them twice in the Olympics was huge and we learned a lot from those games. It’s going to be a challenge, but we are looking forward to it.”
Canada will return home to play a two-game series in June with matches in Winnipeg and Toronto. Tickets are on sale now.
Canada Soccer’s Women’s National Team
Canada recently made history with back-to-back podium finishes at the London 2012 and Rio 2016 Olympic Games. At the last three major women’s tournaments, Canada finished third at the London 2012 Women’s Olympic Football Tournament, sixth at the FIFA Women’s World Cup Canada 2015, and third at the Rio 2016 Women’s Olympic Football Tournament.