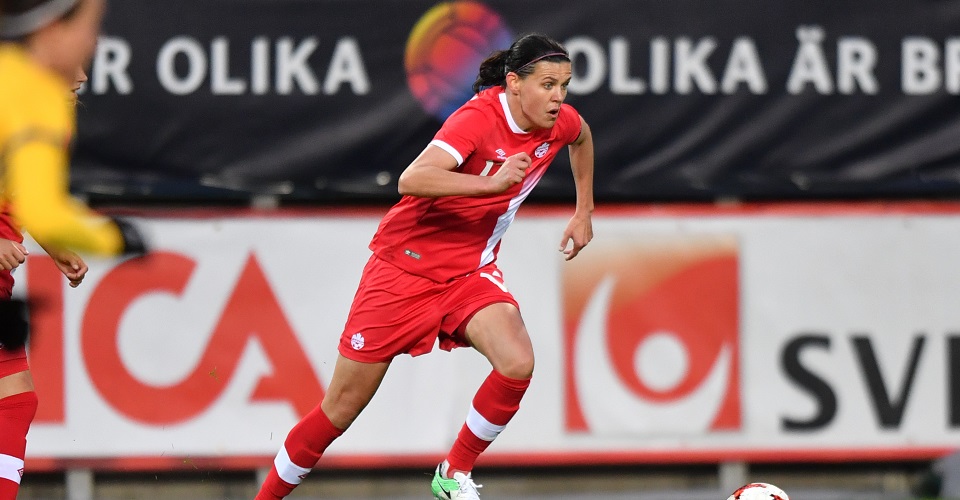 Canada continues its drive to the top of women’s football when it plays Germany, Olympic Gold Medalists and FIFA’s top ranked team, Sunday 9 April in Erfurt, Germany at 15:00 local (9:00 ET / 6:00 PT)
Canada faced Germany twice at the Rio 2016 Olympic Games, winning the group stage encounter 2-1, before falling to Germany in the semi-final. Germany went on to play Sweden for gold while Canada defeated Brazil in the bronze medal match.
Coming off a 1-0 win over sixth ranked, Olympic silver medalists Sweden on Thursday, Canada is looking forward to further improving on its winning record against the world’s top team.
“I think you will get to see that Olympic gold medal quality from Germany tomorrow, that’s what Germany bring. They are a world-class team and we are happy to get a chance to play them again,” said Head Coach John Herdman. “For us it’s about managing playing back to back games knowing that Germany will be coming in fresh.”
Herdman’s views were echoed by the players after the final training session in Jena, Germany on Saturday.
“It’s going to take our best,” said striker Janine Beckie. “We’ve been training now for six days and we were really prepared going into play Sweden, and now with only two days between that match and Germany it is a much shorter turnaround. I think to win it’s just going to take us doing our best defensively, being sharp on the attack, and taking our chances when we get them because a tier one team, the number one team in the world, is not going to give us many opportunities.”
Canada’s Captain Christine Sinclair, who didn’t play in Canada’s win over Germany at the Olympics, also expressed a need for Canada to go into Sunday’s match focused.
“Germany are the kind of team that punish any mistakes that you make,” said Canada’s Captain Christine Sinclair. “Against Sweden we got away with a couple of things and Germany is the type of team that have players all over the pitch that will take advantage of any mistakes we make. And then we have to be lethal in front of the goal because we are not going to get that many chances.”
“We have had some time together on the field against a tough opponent in Sweden and the confidence from that game will spur us on,” added Herdman. “I am absolutely sure that Germany will be a tough test, but if we carry on the spirit we showed against Sweden we’ll do okay.”
Canada’s come-from-behind group stage win over Germany, its first-ever result against the European champions, continues to feature in the public’s memory of the Rio Games and for Head Coach John Herdman, it’s his favourite moment of the tournament.
Canada is currently ranked fifth in the world, behind only Germany, the USA, France, and England. While 2016 saw Canada rise to the highest position it has ever held, Herdman’s team has promised there is more to come.
“We want to take this team from fifth to first and the only way to do that is to consistently play tier-one, world-class teams like Germany,” said Herdman. “We’ve made a commitment to play the best and this match in April will give us an opportunity to test ourselves against the best in the world. Canada Soccer has made incredible strides over the last four years, earning back-to-back podium finishes, and we are ready to show the world we are a soccer nation by beating the best, and becoming the best.”