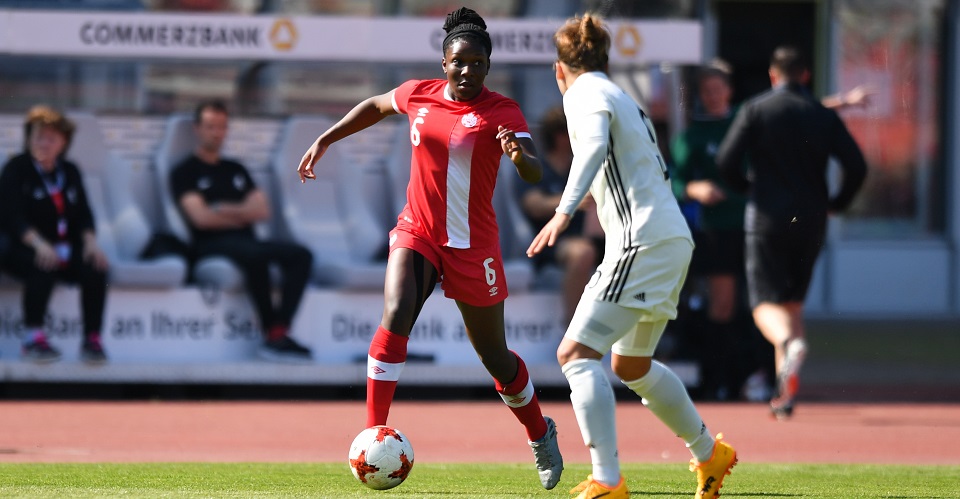 Despite a 2-1 loss to Germany in Canada’s second European friendly this week, Canada Soccer’s Women’s National Team come away from the two matches confident in its place among the world’s best.

MATCH CENTRE: CANADA 1:2 GERMANY
Germany got an early lead in the 13th minute as a result of an own goal by Canada. However, Canada equalized in the 38th minute when Janine Beckie crossed the ball behind the Germany defense and found Deanne Rose, who one-touched the ball past the keeper. Canada showed periods of great control during the second half, but a German corner led to a rebound goal for the opposition in the 85th minute leading to 2-1 victory for the home side.
“I’m pretty comfortable with that performance,” said Head Coach John Herdman, after the match. “I didn’t think Germany dominated us in any way, but it was just a solid defensive performance from Canada and I am really proud of the players. This European tour has been a success. The result against Sweden was crucial, and then moving into Germany we knew a two day turn around was going to be tough for our starting XI. I thought our players showed real resilience today, but Germany were the better team in terms of possession.”
Canada had several excellent chances, but a strong, fresh German side were able to capitalize on extra energy and sustained an attacking approach for much of the game.
“Germany is obviously a fantastic side, number one in the world right now, and never an easy group to play against, but it’s games like this we are excited about because it pushes us, it pushes us to play at a faster pace, their pressure is good and it’s sustained,” said striker Janine Beckie. “They pressed the entire 90 minutes, so we struggled keeping the ball, especially in the first half, and we had a spell where we had the ball that showed what we can do, and I think the goal showed that and some of our build up play showed that. We have players that are willing to get on the ball under that kind of pressure.”
Canada is focused on it’s stated aim of reaching the top spot in Women’s football, and know opponents like Germany are those that will prepare them for big tournamnets including the FIFA Women’s World Cup 2019 in France and the 2020 Tokyo Olympics.
“These kind of teams prepare us for where we want to go and a 2-1 result against the world’s number one is obviously not good enough for us, and I think that’s a big statement,” said Beckie. “There are a lot of players in the dressing room really disappointed that we walk away with a loss in this game when we competed and we can play with the worlds best, so I think the rest of this year you’ll start to see the results that we want.”
For Canada’s players, splitting a two-match series against top European teams, especially considering they are preparing to compete in the Euro competition, only puts Canada closer to its goal.
“It was definitely a wonderful experience to play against two tier one, top international opponents,” said fullback Ashley Lawrence. “We knew coming in it was going to be a challenge, but to become the number one team in the world we have to play the top teams, so this was a great test for us and we are going to take away many learnings for these two games and move forward with those.”
Canada next plays in a two-game series against Costa Rica on 8 June in Winnipeg and 11 June in Toronto. Tickets are on sale now.

Canada Soccer Women’s National Team Home Matches
Canada Soccer’s Women’s National Team will return home to play Costa Rica in Winnipeg on 8 June and in Toronto on 11 June. The matches will mark the first meetings between the two nations since Canada defeated Costa Rica in February 2016 at the CONCACAF Olympic Qualifying Tournament, securing Canada a spot at the 2016 Rio Olympic Games.