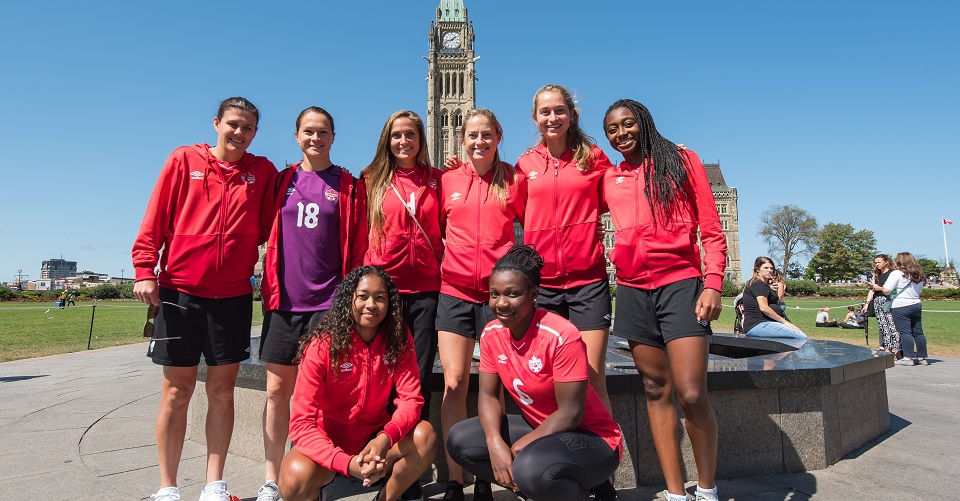 Canada are looking forward to an exciting international soccer match against Olympic rivals Brazil this Sunday 2 September. The 2018 Women’s International Friendly match will be […]

Canada are looking forward to an exciting international soccer match against Olympic rivals Brazil this Sunday 2 September. The 2018 Women’s International Friendly match will be the first meeting between Canada and the 2016 Olympic host since Canada won bronze at Rio 2016.

The Canada-Brazil match will kick off at 14.00 local at TD Place, with gates open at 12.30 encouraging Canadian fans to arrive early to enjoy the on-site Fan Fest. Highlights of the Fan Fest include a meet and greet with former #CANWNT star Marie-Eve Nault and family-friendly interactive activities from Canada Soccer and its marketing partners. For out-of-town fans, the match will be broadcast live across Canada on TSN5, RDS INFO, TSN.ca and the TSN mobile app. In addition, exclusive behind-the scenes content and post-match commentary is available on Canada Soccer’s digital channels including Facebook, Instagram, Twitter, and YouTube.

Canada, preparing for this October’s Concacaf Women’s Championship, have brought together 23 players for the week-long camp in Ottawa including team captain and 13-time Player of the Year Christine Sinclair. Brazil, who qualified for the FIFA Women’s World Cup France 2019 in April, have countered with their top line-up including captain and five-time World Player of the Year Marta.

“Sunday’s match will be a big game for us as it is the third big game in a row where we are facing a very good opponent,” said Kenneth Heiner-Møller, Canada Soccer’s Women’s National Team Head Coach. “We know it’s going to be a big task, but I think we are ready for it. We’ve had a few very good training sessions here in Ottawa, so coming off our performance against Germany in June, we are confident coming into this match that we will perform again. We are excited for the game and we are excited to once again be here in Canada’s capital.”

Coming into this match, Canada’s last two matches were against Olympic champions Germany in June and the FIFA Women’s World Cup France 2019 hosts in April. Looking ahead to Canada’s qualifiers to France 2019, Canada will find out who they will face in the Concacaf Women’s Championship via the Official Draw on 4 September.

“In getting ready for a big tournament, it’s important to meet these big teams, the best teams in the world so you can compare yourselves to them,” said Heiner-Møller. “We don’t take lightly the Concacaf teams we will face at the Concacaf Women’s Championship but we also want to compare ourselves to the best internationally so we can determine how far we are from reaching out stated goals and win a FIFA Women’s World Cup or Olympic Games,” Heiner-Moller said.

Both nations are expected to come out well prepared for each other on Sunday, having faced each other three times in 2016, so Canada is well versed in the strengths of its opponent including Brazil’s attacking threats from players like international star Marta.

“Brazil have an incredible amount of individual skill on their team and a lot of pace on their front line, so we are going to have to be very focused on defending well in one-on-one situations and ensuring our on-field partners are communicating well to resist their attack,” said Heiner-Møller. “We’ll be looking to take care of their strengths, but also impose our strengths on them. I think it will be fun game!”

Canada defeated Brazil at the Rio 2016 Olympic Games to secure back-to-back podium finishes at the London 2012 and Rio 2016 Olympic Games. Canada earned the distinction of becoming the first Canadian team to win back-to-back medals at the Summer Olympic Games since 1908 as well as the first-ever women’s Canadian team to repeat on the podium. In 2016, Canada also split a series with Brazil in Toronto and Ottawa. In Canada’s send-off final match in Ottawa, Canada won 1-0 on a Janine Beckie 90th-minute winner in front of 23,588 fans at TD Place.

Premium Seating
Club Seats at TD Place offer fans a premium match day experience featuring complimentary food and non-alcoholic beverages, access to the exclusive club lounge with two full-service private bars, all from some of the best seats in the venue. Visit TDPlace.ca to purchase club seats.
‘Me+3’ Offer
A special ‘Me+3’ ticket offer is available for this match. By purchasing three tickets in Price Category 3, fans will receive the fourth one free. The ‘Me+3’ ticket packages can be purchased directly via TDPlace.ca.
For complete ticket information visit www.canadasoccer.com/tickets.